Bhagwan Ram Has Always Been Revered And Worshipped In Bengal, Let The ‘Left-Liberal’ Cabal Not Tell You Otherwise 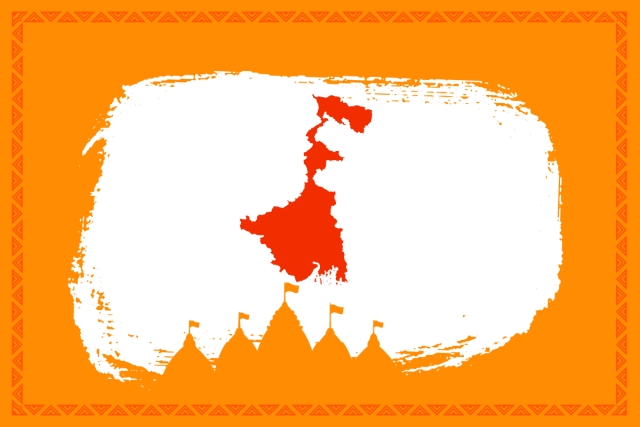 Ever since the Ram Janmabhoomi movement gained momentum in the late 1980s, historians, politicians and others belonging to the Left and ‘pseudo-liberal’ cabal in Bengal have been propagating a myth: that Bhagwan Ram is alien to Bengal and that Bengalis never worshipped that deity.

The false narrative spun and circulated by them was that Bengalis always belonged to the Shakti cult and were worshippers of the Mother Goddess. Bhagwan Ram, they thus concluded, had no place in the Hindu pantheon of deities revered and worshipped in Bengal.

The gathering strength of the BJP, which is closely associated with the Ram Janmabhoomi movement, in Bengal, and the enthusiastic celebration of Ram Navami all over the state in recent years led to the proponents of this false narrative pushing it very aggressively.

The Trinamool and its supporters in academia also pushed this narrative in a futile bid to wean away the masses from the BJP.

Full-throated Jai Shree Ram slogans that reverberated across the State heralded the handsome gains made by the saffron party in the Lok Sabha elections last year.

An angry Mamata Banerjee ordered police to take action against those raising that slogan. She even termed the religious slogan an abuse (watch this video). Many ‘intellectuals’ like Amartya Sen endorsed the fake narrative about Bhagwan Ram being alien to Bengal.

However, Hindu scholars, historians and others have effectively debunked this narrative. They have proved that Bhagwan Ram has been worshipped by Bengalis down the ages. And that Bengali Hindus have always been an integral part of the Sanatan parivar.

Delhi University history professor Saradindu Mukherjee, who was part of a group of eight eminent historians and archaeologists who collected and collated evidence of the existence of a Ram Mandir at Ram Janmabhoomi, has been a prominent voice in Bengal to unmask the fake narrative.

Speaking to Swarajya, Mukherjee said there are innumerable accounts in ancient and medieval Bengal of Bhagwan Ram being worshipped. “The Krittibas Ramayan written by the 15th century Bengali poet Krittibas Ojha is the best example of Ramayan’s intricate link with Bengal. Krittibas wrote the Ramayan about 200 years before Tulsidas,” said Mukherjee.

Many litterateurs of ancient, medieval and modern Bengal have also written about and celebrated Bhagwan Ram, said Mukherjee. During British rule, Meghnad Badh (the slaying of Ravan’s son Meghnad) by Michael Madhusudan Dutta was considered to be one of the greatest literary works of Bengal.

“Nobel laureate Rabindranath Thakur, Bankim Chandra Chattopadhyay, late 19th century historian and ICS officer Ramesh Chandra Dutta and many others wrote poems and prose eulogising Shree Ram and about the Ramayan. Michael Madhusudan Dutta had said that studying the Ramayan is essential for anyone trying to understand Bharatvarsh,” said Mukherjee.

Both Bankim Chandra Chattopadhyay and Rabindranath Thakur, he added, had said that Ramayan is not a myth but a great epic that documents real-life incidents in ancient India. “There are many popular proverbs and dictums around Bhagwan Ram and the Ramayan. All these prove that Bengali Hindus revered and worshipped Shree Ram just like Hindus in other parts of the country,” Mukherjee added.

Veteran journalist and BJP leader Rantidev Sengupta said that there are 25 ancient Ram Mandirs all over Bengal. “Rabindranath Thakur had said that Ramayan is not just an epic but a national treasure and an essential part of India’s civilisational history,” he added.

Hindu Samhati president and scholar Debtanu Bhattacharya points to the ‘Gouriya Ramayan’, or the Ramayan that existed during the ancient Gour era (of Bengal) that finds mention in Chanakya’s Arthashastra. “The patal khanda of Padma Puran that deals with Ramayan was very popular and frequently recited in Bengal. Apart from Krittibas Ojha, there were 51 scholars and poets who wrote the Ramayan in ancient and medieval Bengal,” he said.

“In the ‘rarh’ region of Bengal (sandwiched between the Chotanagpur plateau and the Gangetic delta), the ‘Bishnupuri Ramayan’ written by Sankar Kobichandro was very popular. There are many books and scriptures of ancient and medieval Bengal about Ramayan and Bhagwan Ram,” he said.

Bhattacharya, Sengupta and Mukherjee point out that the best body of evidence that Bhagwan Ram has always been part of Bengal lies in the many names of people and places containing ‘Ram’. One of Bengal’s greatest saints, Ramakrishna Paramahans, belonged to a family of devout Ram bhakts.

“Ramarkishna’s grandfather’s name was Manikram Chattopadhyay, his father’s name was Khudiram and his brothers were Rameshwar and Ramkumar. From the ancient times, Berngalis would name their children after Shree Ram, and thus we have names like Rammohan, Ramprasad, Ramkinkar, Ramesh and many more. Places like Rampurhat and Ramchandrapur have ‘Ram’ in the names”, they said.

Poet and writer Binayak Bandopadhyay said that it is totally inconceivable that Ramayan spread to Southeast Asia bypassing Bengal. “Shree Ram and Ramayan were worshipped in Myanmar, Malaysia, Indonesia, Singapore, Laos, Cambodia and Vietnam. Ramayan still finds primacy in the culture of those countries. It just cannot be that the Ramayan went to those countries from India bypassing Bengal,” he said.

Bandopadhyay points out that the great 19th century saint Bamacharan Chattopadhyay, better known as Bama khepa (khepa means mad in Bangla) was an ardent devotee of Ma Tara (Goddess Kali). “But he used to worship Shree Ram also and used to participate very enthusiastically in Ram Navami celebrations,” he said.

Eminent musician and Hindu scholar Somjit Dasgupta points out that worship of Shree Ram, Devi, and Vishnu continued syncretically and harmoniously in ancient, medieval and modern Bengal. “Buddhist caves in Bengal had carvings showing Shree Ram and ancient Vishnu temples in Bengal showed Ram and Buddha as the avatars of Vishnu,” he said.

“How does one explain the Ayodhya Pahar (Ayodhya Hills) of Purulia if Ram is alien to Bengal? How do we have a Sita kund in Chattogram (present-day Bangladesh) that Swami Vivekananda visited? The famous terracotta mandirs of Bishnupur, including the 108 Shiv mandirs, depict the ten avatars of Vishnu, including Shree Ram,” he pointed out.

Ramakrishna Paramahans, said Dasgupta, was an ardent devotee of Goddess Kali, but had famously said: “Je Ram, shei Krishna” (Ram and Krishna are one).

Chaitanya Mahaprabhu, the late 15th century Vaishnavite saint of Bengal, used to preach the Ramayan as well and extol the virtues of Shree Ram as Maryada Purushottam in his discourses.

Both Binayak Bandopadhyay and Debtanu Bhattacharya say that the propagation of the narrative by Leftists and pseudo-liberals that Bengali Hindus worship Shakti (or Devi) exclusively is a sinister attempt to make Bengali Hindus rootless.

“This (creation of the fake narrative) is an elaborate plot to divorce Bengali Hindus from the greater Hindu samaj and the Sanatan Dharm and take Bengali Hindus away from mainstream Hindu society. The objective is to create a society of deracinated Hindus who will not oppose an eventual integration of Bengal in Islamic Bangladesh or a takeover of Bengal by Islamists,” said Bhattacharya.

“We recite the Devi Kavacham stotram in praise of the Nava Durga (nine different forms of Goddess Parvati) before Chandi paath. Are all the Nava Durga mandirs located in bengal? Aren’t they spread all over India? Aren't Kamakhya, Meenakshi, Kalka, Vishalakshmi, Parvati, Uma and Sati all manifestations of Adi Shakti Mahamaya?

“There are lots of Durga Mandirs in Kashi (Varanasi). At the beginning of all Hindu religious and social occasions, the mantra that is recited (Gangei cha Yamunei chaiva…) takes the names of Ganga, Yamuna, Godavari, Saraswati, Narmada, Sindhu and Kaveri. This mantra binds Bharatvarsha into one. So who are Leftists to divide us? Their evil designs will never succeed,” said Bandopadhyay.

“Shree Ram enjoys an inviolable and sacrosanct place in the heart and mind of every Bengali Hindu who is conscious of his history and heritage. Those who try to say otherwise are charlatans,” he said.