Bihar: Crisis Within LJP May Cloud NDA’s Electoral Prospects In The State In 2024 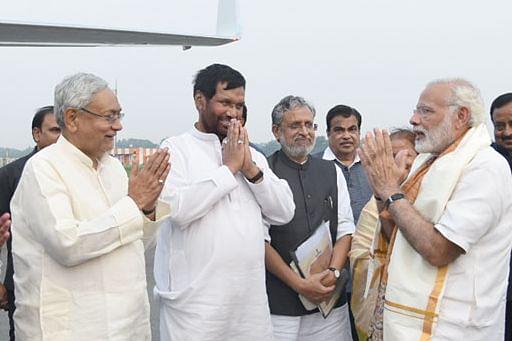 The current crisis in the Lok Janshakti Party (LJP) with Chirag Paswan, son of party founder Ram Vilas Paswan, facing a revolt from top leaders of the party, can have grave implications for the NDA, especially the BJP, in Bihar in 2024.

The root of the ongoing crisis lay in Chirag’s decision to put up candidates against the Janata Dal (United) in the Assembly elections late last year. Chirag had criticised the incumbent chief minister, Nitish Kumar, and accused him of corruption and misgovernance. It was widely believed that some top central leaders of the BJP were propping Chirag to oppose Nitish Kumar and damage the JU(U)’s poll prospects.

Kumar, and some of his close aides, suspected that these BJP central leaders wanted to teach the Bihar chief minister a lesson for having walked out of the NDA in 2014 in protest against the saffron party’s decision to project Narendra Modi as the Prime Ministerial candidate.

“Some top JD(U) leaders believe that even though the BJP took him back into the NDA in 2017, a section of the top leadership of the BJP hadn’t forgiven him for what they viewed was an act of backstabbing by Nitish Kumar,” said political commentator Satish Upadhyay. What confirmed their suspicion was Chirag’s repeated assertions that he was firmly with the BJP and was only opposed to the JD(U). Chirag also publicly stated many times that his primary aim (in putting up candidates against the JD-U) was to scupper the JD(U)’s chances at the hustings.

The BJP’s criticism of Chirag Paswan’s ‘sabotage’ was mild and mired in obfuscations. Prime Minister Modi, while campaigning in Bihar last year, praised Ram Vilas Paswan but failed to utter a word against Chirag for trying to harm the prospects of a party that was his (Modi’s) ally.

The election results confirmed the widely-held belief that the LJP would harm the JD(U)’s prospects--the JD(U)’s tally of seats came down from 71 in 2015 to 43 in 2020.

The JD(U) blamed Chirag Paswan for harming its prospects. An analysis of the results showed that had the LJP not put up candidates against the JD(U), the latter would have won at least 36 more seats thus taking its tally to 79 and making it the largest party in the NDA in Bihar.

“The BJP’s game plan succeeded, but just by a whisker. The NDA got 125 seats while the RJD-helmed mahagathbandhan got 110. The LJP won only one. The NDA has a slender majority of just three MLAs. The BJP’s alleged gameplan to teach Nitish Kumar a lesson and erode the JD(U)’s strength could have gone seriously wrong had the mahagathbandhan won more seats,” said Upadhyay.

Nitish Kumar and some of his senior colleagues who believed it was the BJP which backed Chirag Paswan never forgave the latter. They engineered defection of many functionaries from the LJP to the JD(U) and in April, the lone LJP legislator joined JD(U).

After the Assembly elections, the JD(U) was invited by the BJP central leadership once again to join the Union council of ministers.

The JD(U) had turned down a similar invitation in 2019 because the BJP was offering only a token representation to the party in the Union cabinet. The JD(U) wanted proportional representation.

The BJP won 17 seats in Bihar in 2019 while the JD(U) won 16 seats. But while the BJP has five ministers--three cabinet and two ministers of state--in the Union council of ministers, the JD(U) was offered a token representation of only one cabinet berth.

That was not acceptable to Nitish Kumar. With speculation of a cabinet expansion in the offing now, the JD(U) has revived its demand for proportional representation. More so since the JD(U) had emerged as the second largest party in the NDA after the exit of the Akali Dal.

Nitish Kumar, however, put in a stern condition: the JD(U) will not join the Union council of ministers if any LJP MP is also inducted into it.

Chirag Paswan is the primary claimant for a berth in the Union cabinet; his father was a Union cabinet minister till his death last year. But Nitish Kumar effectively scuppered his chances by insisting on this condition. The BJP central leadership also does not want to push Nitish Kumar too far by disregarding his condition and inducting Chirag Paswan or any other LJP MP as a Union Minister.

This triggered acute resentment among the five LJP MPs (other than Chirag Paswan) since none of them could have hoped to become a minister. They all blamed Chirag for making a foe out of a friend (Nitish Kumar). It is widely believed that the JD(U) encouraged the five LJP Lok Sabha MPs to revolt against Chirag and remove him as the leader of the LJP parliamentary party on Sunday evening, replacing him with party MP Pashupati Kumar Paras. Paras is Ram Vilas Paswan’s younger brother and is the MP from Hajipur, a constituency held by LJP founder eight times between 1977 and 2014.

Chirag Paswan, according to some of his close aides, suspects that the BJP central leadership is complicit in the JD(U)’s gameplan of stoking a revolt against him and turning five MPs of his party, including his uncle Paras and first cousin Prince Raj, against him. “The promptness with which the Lok Sabha secretariat recognised Paras as the parliamentary party leader in place of Chirag reveals the BJP’s hand in this whole dirty game,” a friend of Chirag Paswan who did not want to be named told Swarajya over phone from Patna.

Not content with removing Chirag as the head of the party in Parliament, the five MPs held a meeting of the party’s national working committee at Paras’ residence in New Delhi and removed Chirag from the post of party president as well.

Chirag Paswan also struck back and convened a meeting of the party’s executive committee at his New Delhi residence. The meeting decided to expel all the five MPs from the party.

On Monday evening, Chirag Paswan, who is recovering from a Covid infection, drove to his uncle Paras’ Rajendra Prasad Road residence in New Delhi in a last ditch effort to mend fences and prevent a split in the party.

But Chirag was kept waiting outside the gates for 15 minutes and when he went inside, he could only meet his aunt. Chirag left a letter offering to step down from the post of party president if his mother, Reena Paswan, replaced him. But that offer was clearly not acceptable to the rebel MPs. “They were not interested in any compromise because they were acting on the behest of Nitish Kumar. The BJP knew about this rebellion (against Chirag) and blessed it,” said Chirag’s friend.

Chirag Paswan now has his back to the wall and finds himself completely isolated within the party that was founded by his father. Political observers say that Chirag may join hands with the RJD in order to keep himself afloat politically. And that can turn out to be a cause of worry for the BJP in 2024 (when the next Lok Sabha elections are due).

Ram Vilas Paswan and Lalu Yadav were colleagues in the Janata Party and also in the Janata Dal. The two maintained a cordial relationship till Paswan’s death in October last year. Lalu’s son Tejaswi and Chirag know each other quite well and, according to Patna’s political grapevine, Tejaswi has already reached out to Chirag.

Chirag may have been left high and dry by his five fellow-Parliamentarians, but he commands the support of most of the Paswans who see him as the legitimate heir of the LJP founder. The Paswans, considered to be the most upwardly mobile, affluent and powerful among the Dalits, form six percent of Bihar’s electorate and are a fairly cohesive lot. Paswan is the surname of the ‘Dusadh’ community which accounts for 30 percent of the Dalits in Bihar. The Dusadhs are a martial community; the term ‘Dusadh’ translates into ‘insurmountable’.

The British East India Company recruited ‘Dusadhs’ as soldiers and they played a major role in the 1757 Battle of Plassey. The British then recruited them into the police and many Dusadhs became musclemen of rich zamindars in Bengal, Bihar and Odisha. That, say many historians, gave them the name ‘Paswan’ which in Urdu means a trusted bodyguard (nazdik ka rakshak). A large number of Paswans serve in the police and armed forces today.

The Paswans were the first Dalit group in British India to form a caste association in the early part of the first decade of the 20th centrury. They have been politically powerful since then and their political influence transcends their caste, thanks to their affluence and social power.

Chirag, angry with the BJP for leading him on to oppose Nitish Kumar last year and now ditching him to bless the JD(U)’s bid to isolate him politically, is quite likely to join hands with the RJD and become part of the mahagathbandhan in Bihar. If the Paswan community backs him, as it is most likely to, it will trigger a caste realignment that will work to the advantage of the mahagathbandhan and severely affect the NDA’s prospects in Bihar. And if that happens, the BJP will suffer the most. It will then realise, in hindsight, that its misadventure (egging Chirag to oppose Nitish Kumar and field candidates against the JD-U) was totally unnecessary. And instead of weakening the JD(U), that misadventure may well result in adversely affecting the BJP’s prospects in the 2024 Lok Sabha elections.

The BJP, or at least that section of its central leaders who were playing this whole Bihar game, will also realise that running with the hare and hunting with the hounds is a risky game that can easily boomerang. Such risky games are best not played, at least when they are totally unnecessary.