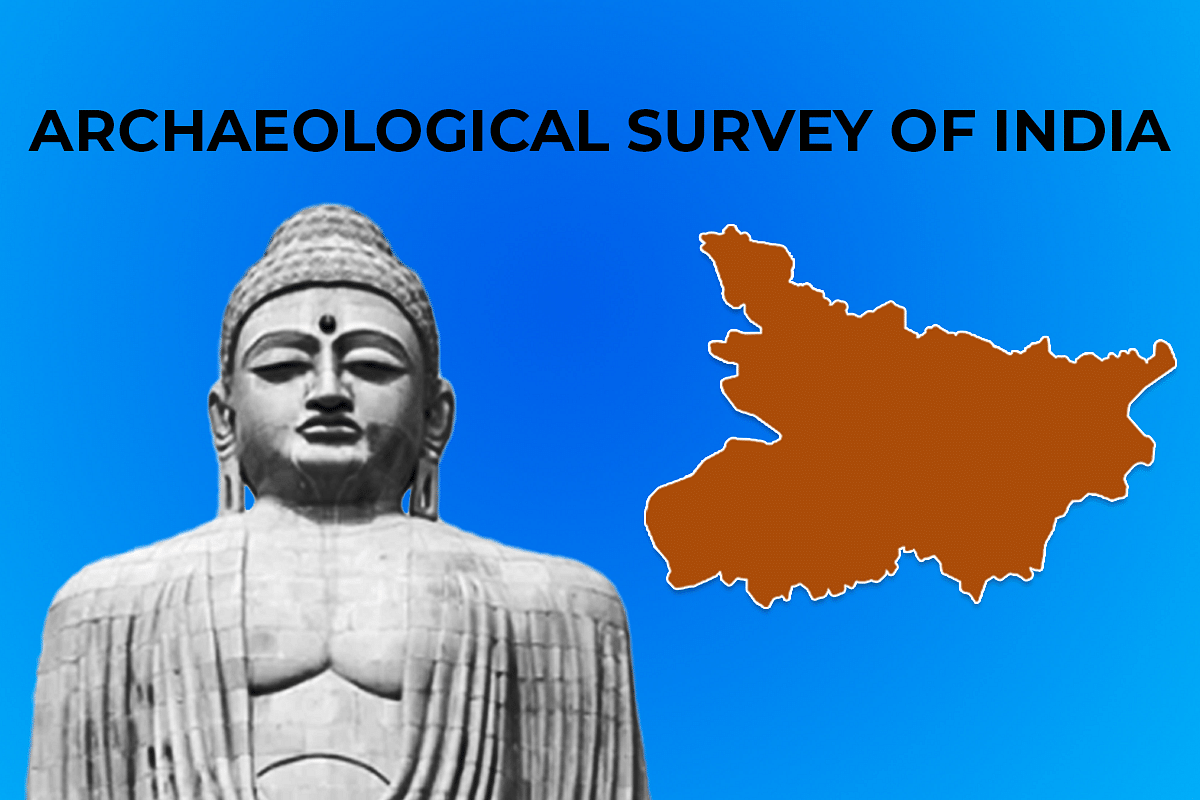 ASI tweeted Tuesday (29 November) that it had taken back control of a holy 2300-year-old Buddhist shrine in Bihar’s Sasaram from Muslim encroachers.

The Archaeological Survey of India (ASI), which operates under the Union Ministry of Culture, boasted (see this tweet) Tuesday (29 November) that it had taken back control of a holy 2300-year-old Buddhist shrine in Bihar’s Sasaram from Muslim encroachers.

Turns out that the boast was an empty one because Muslims have been allowed to worship at the shrine that they had captured in 2005.

The shrine is a cavern in the Kaimur Hills, 3 km south of Sasaram in Bihar’s Rohtas district, where Lord Buddha is believed to have spent a night after attaining enlightenment at Bodh Gaya in 528 BCE (Before Common Era).

Much later, in 432 BCE, Emperor Ashoka inscribed an edict in Brahmi script in one of the walls of the cavern. This is one of Ashoka’s 13 minor rock edicts.

The cavern was discovered during the reign of the British and was acquired and declared a ‘protected monument’ by the ASI on 1 December, 1917.

The ASI, as has been its practice, neglected the upkeep of the cavern and did not even take any measures to protect it. In 2005, Muslims of the area ‘captured’ the cavern and installed a gate at its entrance.

The Muslims forcibly declared the cavern to be the mazar (mausoleum) of an obscure Sufi saint and started offering prayers there.

The Muslim captors of the Buddhist shrine damaged some of the rock edicts of Emperor Ashoka in a bid to erase them, but were unsuccessful. They then covered the edicts with a green cloth inscribed with Islamic prayers.

Since the early part of the last decade, local Muslims started organising an Urs there every year. A large dargah also came up next to the cavern and a part of the dargah even encroached on the roof of the cavern.

The holy Buddhist shrine was thus taken over by Muslims and it became out-of-bounds for all non-Muslims.

In 2008, on getting to know about the forcible occupation of the holy Buddhist shrine by Muslims, the ASI wrote to the Rohtas district authorities asking it to remove the encroachments (by Muslims).

The same year, the ASI also put up a signboard declaring it to be a protected monument. The signboard detailed the historicity of the cavern and expressly stated that it contained Ashokan rock edicts and was a Buddhist shrine.

But the Muslims promptly removed the signboard and even had the temerity to dispute the cavern’s historicity. The Muslim captors of the cavern spun a false story that a Sufi saint spent months in the cavern, died here and was buried there.

The district administration asked the state authorities for directives. But, say Bharatiya Janata Party (BJP) leaders, Nitish Kumar (who was the Chief Minister and also held the home portfolio) asked the Rohtas district authorities to disregard the ASI’s request.

Between 2008 and 2018, the ASI wrote as many as 20 letters to the Rohtas district administration asking the latter to remove the encroachments from and around the cavern. But the district authorities, acting on the directives of Chief Minister Nitish Kumar, did not raise a finger.

This matter came to light in September this year, when a Hindi news channel highlighted it. The BJP launched an agitation in protest against the encroachment.

Fearing that the issue would blow up on his face, Chief Minister Nitish Kumar reportedly asked the Rohtas district authorities to get the Muslims to surrender their claim over the shrine.

The Sasaram Sub Divisional Magistrate (SDM) asked the ‘Markazi Muharram Committee’ (custodians of the dargah) to hand over the keys of the gate to the cavern to the ASI.

The Committee flatly refused and reiterated that the cavern was not a Buddhist shrine but a mazar of a Sufi saint.

Bihar BJP leader and leader of opposition Samrat Chaudhury, threatened to intensify the agitation against the encroachment of the Buddhist shrine. A few others threatened to take the matter to court.

Knowing that the issue could snowball into a major controversy, Chief Minister Kumar directed the district administration to hold negotiations with the Muslims and find a way out.

After a lot of cajoling, and with help from the local Rashttriya Janata Dal (RJD) leaders, the Muslim captors of the shrine ultimately agreed to hand over one key of the gate to the cavern to the ASI.

The ASI happily posted photos of the Muslims handing over the key to its (the ASI) representative. But the ASI’s boast of reclaiming the cavern turned out to be an empty one because the Muslims retained custody of the duplicate key of the gate.

Rohtas District Magistrate (DM) Dharmendra Kumar let the cat out of the bag when he said that the Muslims would use the key they retained, to enter and offer prayers at the ‘mazar’ inside the cavern!

Local BJP leader Ashutosh Singh told Swarajya from Sasaram that the local administration entered into a illegal deal with the Muslim encroachers.

Under this deal, which he termed an “eyewash” and a “fraud perpetrated on Hindus and Buddhists who revere Lord Buddha”, the ASI would gain control of the cavern in name only while the actual control would remain with the Muslims.

“Why should Muslims, who forcibly occupied the cavern with its 2300-year edicts which predate Islam, be allowed to retain custody of what is clearly a holy place of the Buddhists? This is nothing but blatant appeasement of Muslims and abetment of a criminal act on their part,” said Singh.

“The Muslim contention that a Sufi saint spent time inside the cavern and was buried there is a completely fake one. No one in Sasaram has ever heard of such a Sufi pir. What happened in 2005 (the capture of the cavern by Muslims) was nothing but a blatant case of encroachment and a shameless attempt to appropriate a shrine of another faith,” historian Suheldev Verma who is considered to be an authority on Sasaram’s history told Swarajya.

Local BJP leaders told Swarajya that allowing Muslims to continue their worship inside the cavern, which they had clearly encroached on and which never had any links to Islam, was a “shameless case of Muslim appeasement”.

Locals say the Muslims have got away with this perfidy because they enjoy the patronage of the RJD. Muslims form over 25.5 per cent of the population of Sasaram, but wield disproportionate influence because they are a powerful vote bank nurtured by the RJD.

The RJD, which is now the ‘big brother’ of the ruling coalition, will never allow Muslim encroachers to be evicted from the cavern even though their presence there is an affront to religious sentiments of followers of non-Abrahamic faiths.

Legal experts say that this is a fit case for judicial intervention. “The pre and post-2005 status of the cavern is well-documented and it can be easily proven that Muslims captured the cavern in 2005 before constructing the dargah over it. Any court will order the eviction of the encroachers and demolition of the illegal dargah,” said a senior advocate of the Patna High Court who hails from Sasaram and knows about the capture of the cavern.

Pernicious politics of appeasement has allowed this travesty of justice in Sasaram and awarded, instead of punished, those who committed an illegal act driven by fundamentalism.