Breaking Down Rahul Gandhi’s Narrative On The Rafale Deal 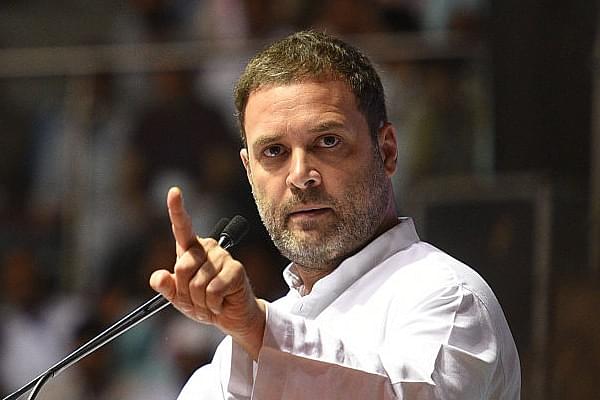 Rahul Gandhi has failed to back his allegations about the Rafale deal with concrete facts. (Raj K Raj/Hindustan Times via Getty Images)

Exasperating farrago of distortions, misrepresentations, and outright lies being broadcast by an unprincipled showman masquerading as a politician. This is how Shashi Tharoor would have probably described Rahul Gandhi’s assertions on the Rafale deal in Parliament if he were an independent commentator. But, as a party loyalist, he has been all praises for the 48-year-old “youth icon”.

While addressing Parliament yesterday (20 July), the Congress president came down heavily on the Rafale deal, asserting that the deal was exorbitant in comparison to the one Congress was pursuing. Gandhi also accused the Defence Minister of lying to the nation when she refused to provide details about the deal, citing a secrecy pact with France. He then went to the extent of saying that the French President had personally told him that no such pact existed.

These are grave allegations that Gandhi made in Lok Sabha. Such allegations have to be backed by facts, but the scion of Nehru-Gandhi family has since not furnished any. He did not cite any sources to back his assertions either. Here is an attempt to discuss facts and break down the narrative that the Congress and its president is pushing.

It was in 2001 that the Indian Air Force (IAF) expressed its requirement of 126 Medium Multi-Role Combat Aircraft (MMRCA), of which 18 were to be imported in flyaway condition while the rest 108 were to be manufactured by Hindustan Aeronautics Limited (HAL) through transfer of technology. Responding to a request for proposals in 2007, six manufacturers submitted theirs and the final contest boiled down to Rafale and Eurofighter Typhoon. Rafale emerged as the eventual winner and the announcement was made on 31 January 2012, following which negotiations began.

During 2012-14, the negotiations reached an impasse, primarily because of two issues:

1. Dassault, Rafale’s manufacturer, was not guaranteeing the manufacturing of 108 remaining planes in India by HAL, as they were not sure about HAL’s capabilities, going by media reports.

2. While India wanted absolute transfer of technology, France was willing to transfer limited technology for licensed-producing planes and not the design technology.

While these were the two primary reasons, there was another reason as well: the cost.

There were discrepancies between the actual cost of the plane and the cost the Indian government had been considering, as per media reports. Abhijit Iyer-Mitra, Senior Fellow at the Institute of Peace & Conflict Studies, independently assessed that the plane could not cost under $212 million, as against the government’s reported claims of $82.5 million.

In a piece for the Economic Times, Iyer-Mitra wrote that, as per media reports, the cost escalated (from $82.5 million) to $119 million per unit by 2013, and by 2014, costs shot to $238 million per unit. Iyer-Mitra wrote that “faced with a $30 billion contract for 126 fighters that would have wrecked the capital outlay for years, if not decades (since no one in the previous government did due diligence on actual costs or available funding), abandonment of the competition was the most fiscally prudent thing to do.”

This is how the deal died by 2014 during the previous regime.

Narendra Modi announced the government-to-government deal to buy 36 Rafale planes in flyaway condition in a joint press conference with the then French president Francois Hollande during his visit to France in April 2015. The deal was finally inked in September 2016. This marked the scrapping of the earlier MMRCA deal for 126 planes.

It was reported that the government-to-government deal would see deliveries within 36 months, and, as per the latest reports, the first plane is likely to be delivered in 2019, in line with the original plan. This addresses the IAF’s crippling shortages in terms of fighter squadrons, as the strength is already low (32 against the required 42) and, with ageing squadrons being phased out, it is set to be in a critical position in a few years from now and, therefore, the IAF desperately needs new fighters.

The deal thus came as a relief that not just ensured timely delivery of two squadrons but also opened up the possibility of more in the future.

Though this is not the first time that Gandhi or the Congress has made contentious claims about the Rafale deal, this instance is notable as allegations were taken to a whole new level. Gandhi alleged that:

1. The Modi government bought Rafales at an exorbitant rate.

2. The Defence Minister lied about the secrecy pact that prevented her from disclosing details about the deal.

3. The French President personally told him that no such secrecy pact existed.

4. Reliance was unfairly part of the project and that it did not have the requisite experience.

Here’s a point-by-point breakdown of the allegations made by Gandhi:

1. In his assessment, Iyer-Mitra highlighted that the government’s reported per-unit cost for Rafale was unrealistically less than even the upgrade cost for older Mirage aircraft. He then wrote, “This speaks loads of the quality of equipment and the non-existent ‘advancements’ that the Rafale supposedly represents. If any further proof was needed as to why the Rafale has failed every single competition and been described by no less than a head of state as ‘yesterday’s technology’ one need look no further.”

The Rafale that India is now getting is not the same as the one under the previous regime. Now it costs around $243 million per unit, merely $5 million more than the cost of the previous one that came with “yesterday’s technology”, and comes with:

In his Economic Times piece, Iyer-Mitra also compared the cost at which India is buying the plane with the cost that other countries are buying it at. He noted, “Egypt bought their Rafales for $246 million ppu and India paid $243 million, with a less extensive package than Qatar, but with 50% offsets and significant India-specific modifications.”

2. French have defended the deal previously, too, and they have now taken note of Gandhi’s allegations and have issued a statement that says, “France and India concluded in 2008 a security agreement, which legally binds the two States to protect the classified information provided by the partner.”

Nirmala Seetharaman, too, rebutted Gandhi’s claims and cited Article 10 of intergovernmental pact signed on 25 January 2008 by Congress’s own government. Additionally, a pact on the “exchange and reciprocal protection of classified or protected information” was also signed during the French president’s visit this year.

3. While there is no way to refute something allegedly said to Gandhi in person by the French president, it should be noted that the French president indeed commented in an interview to India Today on sharing information about the deal, which mirrors what Gandhi said in Parliament. The comment was tweeted by the Congress, but, again, the Congress has taken the comment out of context.

In the interview, Emmanuel Macron said that when a deal involves extremely sensitive business interests, it is not desirable to give out details of such a pact. The details of the commercial agreements should not be made known to rival companies as doing so may hamper the interests of the firms and, hence, secrecy is justified.

According to the same report, the President said that if the Modi government wanted to share some details covered under the secrecy clause with the opposition parties to clear confusion and resolve political stalemate, the French government would have no objection to it.

It is clear that, as per the French president, it is up to the discretion of the Indian government, and the French have not given a license to publicly share the information. They prefer secrecy.

4. In his piece for Swarajya, Major General Mrinal Suman wrote that the criticism surrounding the involvement of Reliance and exclusion of HAL was uninformed. He pointed out that Reliance is involved in ‘offset obligations’ and not in any sort of joint-production of planes (all planes are coming in flyaway condition, with no production in India) and that the selection of partner to fulfil offset obligations is entirely up to Dassault, Rafale’s maker. Dassault is thus well within its right to chose Reliance (or any other firm). He also points out that foreign manufactures have long been partnering with private entities in India rather than government ones. Boeing-Tata and Mahindra-Lockheed Martin partnerships may be mentioned here.

As for experience, the author pointed out that Reliance has been active in defence production since 2015 and has key partnerships with major players the world over, and has been a part of major defence projects lately. Reliance, therefore, has the requisite capability to deliver what it’s signing up for.

The narrative being pushed by Gandhi and the Congress is thus largely built upon lies and a misinformation campaign. It is deplorable how the Grand Old Party is trying to use an issue so integral to national security to churn out political cream. Also, the Congress president is dragging France and the French president into their narrative to the extent that the French have to repeatedly issue clarifications. Fair to say then that the Congress is unfortunately staking not just national security but also India’s international relations for the sake of political capital.