Can Congress Atop Elephant Stop BJP Juggernaut In Madhya Pradesh? 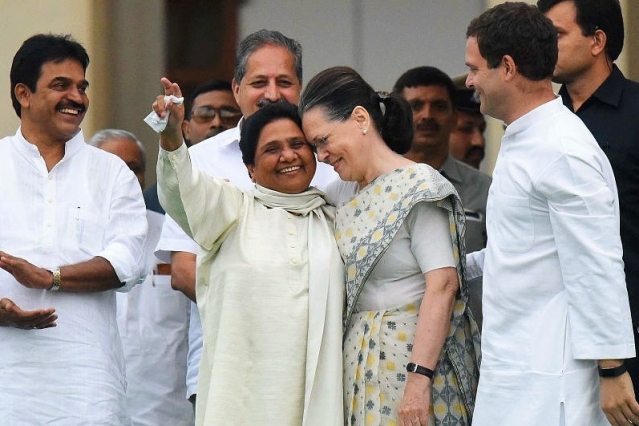 The Congress party is in talks with Mayawati’s Bahujan Samaj Party (BSP) to form an alliance in Madhya Pradesh to unseat the Bharatiya Janata Party (BJP) from power. BSP has decent influence among the Dalit community specially in areas bordering Uttar Pradesh and has on an average 10,000 votes per seat. This is significant considering the average margin per seat was 17,000 odd votes in 2013. Congress hopes a swing of 1.5 per cent to 2 per cent in its favour, and seamless transfer of votes from the BSP will help the party end its ‘vanvaas’ in the state.

BSP won 11 seats and cornered 7 per cent vote share in 1993 elections held for undivided Madhya Pradesh. It has recorded an average vote share of 7 per cent in the last five elections in the state. The party enjoys 15 per cent support among the Dalit community, which account for 16 per cent population of the state. There are 35 seats reserved for Dalits. Scheduled Castes or SC high population districts are Ujjain, Sehore, Chhatrapur, Datia, Tikamgarh, Bhind, Sagar and Dewas (>25 per cent). Chamars and Bahalis are the prominent sub castes among the Dalits accounting for 60 per cent of SC population.

BSP’s vote share is still in the 7 per cent range, but its seat tally has drastically reduced to half – currently, four in MP and one in Chhattisgarh. It has not been able to challenge the dominance of BJP-Congress in the state. Lack of tall state level leaders and party’s leadership (both Kanshiram and Mayawati) focus on Uttar Pradesh has negatively impacted its prospects in the state. Many leaders of BSP have left the party and joined the Congress or the BJP.

BSP has pockets of influence in the Vindhya and Chambal regions bordering UP. These regions have 90 seats. The premise of the alliance efforts is that whatever votes BSP receives is anti-BJP and if Congress and BSP join hands, these votes can be seamlessly transferred. The party has won unique 13 seats, finished runner up in 34 seats and secured third position with more than 10 per cent vote share in 69 seats in the last three elections. Almost half of BSP votes are of party cadre and half due to influence of candidate.

In Chambal and Vindhya regions, BJP won 61 out of 90 seats in 2013. Had the alliance fructified, its tally in these regions would have reduced to 29 (-32). Dalits account for one-sixth of the population and Congress aims to consolidate its position among this vote bank in an alliance with the BSP. In Vindhya and Chambal regions, the alliance would have been significantly ahead of BJP in 2013 in term of vote share.

Had the Congress and the BSP contested together in 2008, the alliance would have won the elections assuming both partners would have been able to transfer their votes without leakages. The fact that Uma Bharti was contesting separately would have helped the alliance. In 2013, the contest would have been close with mahagathbandhan bagging 102 (+40) and BJP 124 seats (-41). They would have succeeded in preventing a more than two-thirds BJP sweep.

BSP Has Proven Its Ability To Transfer Votes, But Reverse Transfer Is Key

In the past, BSP has proved its ability to transfer its votes to alliance partners. However, the challenge lies in whether the Congress voter would vote for the BSP candidate in seats allotted to Mayawati. In 1996, when the party allied with the Congress in Uttar Pradesh, while its seat tally remained the same, Congress improved its tally by five seats. In the recent by-polls in UP in Gorakhpur, Kairana and Phulpur, though there wasn’t a formal alliance, BSP cadre and supporters voted for the SP and Rashtriya Lok Dal candidates on her one call.

While the party has decent support among the SC community, it has failed to garner support among Scheduled Tribe (ST) community, which is its big weakness. Even in 2013, its vote share in ST seats reduced to almost half.

Post 2013, its support among Dalits declined further. BSP failed to open its account in 2014 Lok Sabha elections. All India Dalit support for the party reduced from 20 per cent in 2009 to 14 per cent in 2014. BJP has been able to make inroads, specially, among the youth and non Jatav sub castes among the SCs on the plank that Jatavs (Mayawati sub-caste) has received the majority benefits of reservation. Post 2014 victory of the BJP, the opposition has been trying to spread the propaganda that BJP is anti-Dalit based on some cow vigilante incidents and a Supreme Court order diluting the provisions of the SC-ST Act.

Contradictory Statements From Both Sides Have Created Confusion Among Cadre

BSP as per reports is demanding a package deal, alliance in all three states, which go to polls in November and a pan India level alliance for 2019. The alliance for sure will increase the headache of the BJP and the party has formulated a strategy of weaning away influential BSP leaders and bringing them into the party fold. However, till date there is no clarity on the alliance. There are various numbers floating around, however, in my opinion 30 seats for BSP is a win-win deal for both parties.

It Is in BJP’s Interest That Alliance Doesn’t Fructify

BJP would hope that the alliance talks fail, BSP contests separately and maintains its historical performance. Whatever vote BSP garners is essentially anti-BJP. If BSP weakens, then these votes could go to Congress and harm BJP’s prospects.

To sum up, a Congress-BSP alliance will make the contest interesting in MP. The key for success of this alliance is seamless transferability without leakages. How much BSP can hold onto its previous support among Dalits and how much BJP has been able to soothe the nerves of the community through SC-ST Amendment Act will decide the course of the elections. Stay tuned.

Madhya Pradesh 2018: While Congress Is Hoping For ‘Ghar Wapsi’, BJP Is Aiming For A Gujarat Repeat

‘Mahagathbandhan’ Breaks Down In Madhya Pradesh: BSP Says Will Contest All 230 Assembly Seats By Itself