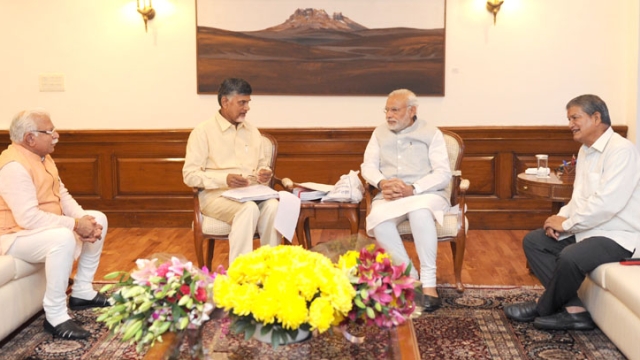 The Prime Minister and Chief Ministers

Simultaneous elections to the Lok Sabha and Vidhan Sabhas - the prime minister suggested it some time back, and recently the president voiced his support for the idea too - are back on the nation’s agenda. To take it forward, the Modi government has sought the opinion of citizens on the issue through the MyGov digital platform.

In an interview given to CNN-News18, Prime Minister Modi had said that simultaneous elections to the central and state legislatures would aid governance.

If nothing, this step would at least allow elected representatives a longer, and hence more appropriate, time-frame to evaluate public policy. Currently, from the politicians’ side, public policy evaluation is captive to electoral cycles and verdicts. An elected representative is forced to evaluate policy not on the basis of its outcome, but on the basis of its real or perceived political fallouts almost every year. In the current system, national political parties in power are forced to do this many times in a tenure of five years (not counting by-elections), and regional parties at least twice.

One effect of this ‘electoral’ evaluation of policies is that some economically good policies are killed while still in infancy, and the bad ones continue.

Take, for example, the reforms initiated by the Narasimha Rao government in 1991. As this Swarajya piece argued, in ‘1994, when Congress lost the assembly elections in several states, Rao decided that inflation was the thing to focus on, liberalisation be damned’. As a result, Indian industry, “which was about to take off tripped without any prior warning”. Reforms, which ideally should have been given a longer time to play out, were underplayed too soon. Since then politicians have been unwilling to sell reforms due to short-term electoral consequences.

This is not to argue that ministers always tend to make wrong public policy choices. But the first task of a politician is to seek and maintain power; sound logic and economics comes second. So, in a good policy vs good politics trade-off, it may be that ministers side with good politics even while knowing fully well that they would have to sacrifice sound policy.

Simultaneous elections to the central and state assemblies give ministers and representatives a longer period—five years in India’s case—where they can focus only on policy and not be weighed down by politics. Free from the fear of polls and vote-banks for five years, policy evaluation can then be taken up through the appropriate tools.

In purely economic terms, there are some policies for which the short-term political costs are too high. The simultaneous elections idea would go a long way in eliminating those costs.

This is not to say that there will be no hiccups in the idea of simultaneous elections. Here are some possible hurdles.

First, what happens if a government, state or central, falls? This will de-sychronise elections again. So provisions may have to be made that even if governments fall, a new coalition must be elected in its place, even as a stopgap.

Second, during the changeover period, some state governments will have an extended life and some shortened ones, in order to hold the first of the elections simultaneously. States which face a shortened tenure, will protest. So the changes will clearly have to be negotiated in advance with major national and regional political parties.

The key to simultaneous polls thus, is political consensus.