Dhimmitude At Its Worst At Shaheen Bagh: Bogus Empathy Towards Kashmiri Hindus No Longer Holds Water 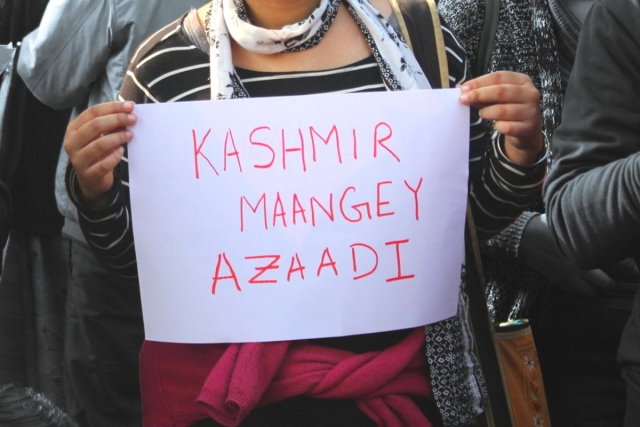 Observers of the ongoing, carefully-choreographed anti-Citizenship Amendment Act (CAA) vaudeville at Shaheen Bagh, New Delhi, were treated to a curious sight on 19 January — the thirtieth anniversary of the Kashmiri Pandits’ ethnic cleansing from their valley.

Posters appeared, expressing solidarity with the Pandits, and commiserating with their forced expulsion. A solemn two-minute silence was observed, and a programme organised, ostensibly to convey empathy to the Pandits’ trauma.

The irony could not have been more painful: azadi-chanters were trying to empathise with Pandits, who were forced out of their sacred land by azadi-chanters in 1990.

To add insult to injury, the usual suspects gushed and cooed, over how adorably sweet this display of communal harmony by the Shaheen Bagh players was. The rest of India was even advised to learn from the virtuousness flaunted at Shaheen Bagh.

What India learnt instead, was that this was Dhimmitude at its worst — the practice of turning a blind eye to errors by individual members of a certain community, lest the collective sentiments of that community be hurt.

To practitioners of this dark art, to Delhi’s doyens of Dhimmitude, it is more important to appear politically correct, than it is to accept the truth.

By this, religious harmony is to be preserved even at the cost of religious harmony. Read that again: the cause of disharmony is sought to be redefined as non-causative, irrespective of the effect such disingenuousness has on society.

It is this spectacular lack of logic which expects the Pandits to somehow find solace in the solidarity offered to them by azadi-chanters. It will never be understood, whether by design or by inability, that this is not empathy, but a cruel joke, and as insensitive and heartless as a TikTok ‘acid-victim look’ makeup challenge.

But the rest of India sees, and understands, that this desperate effort, to apply a rosy filter to politically expedient hypocrisy, is the sword upon which pseudo-secularism is set to fall.

She knows that with each passing day, these anti-CAA protests are gradually transmogrifying into anything but.

She also knows that this passage will not be without heightened acrimony, for which, she routinely presents us with examples both trivial and grave, of Dhimmitude, from far corners of our ancient land.

The first prize should perhaps go to Member of Parliament from Telengana, Asaduddin Owaisi, who stated publicly that his forefathers, and their Majlis-e-Ittehadul Muslimeen (MIM, a body of aristocrats and theocrats owing allegiance to the Nizam of Hyderabad), fought for India’s Independence.

This is untrue, since the Nizam, his army of irregulars — the Razakars (name ring a bell?), and the MIM, not only declined to join the Union in 1947, but brutally subjugated the pro-accession/anti-Nizam Telengana uprising as well. An ugly story of mass rapes, which took place then, is still not talked openly about in that region.

Now, Owaisi may continue to make grand claims of historical patriotic inclinations, either until he is blue in the face, or his brother is granted that much-prayed-for 15 minutes of a police-less state, but it will not change falsehood into reality.

That is his right. But what is appalling is the Dhimmitude, which, rather than using historical records to contradict Owaisi’s absurd claim, quietly and conveniently allowed it to pass on uncontested.

Then we have a senior advocate who, appearing for the Sunni Waqf Board in the Ram Janmabhoomi case, allegedly declared in the Supreme Court that “Aurangzeb was one of the most liberal rulers…” India had ever seen. The truth of course, is exactly the opposite, that if Aurangzeb was a liberal, then Kapil Dev never took a wicket.

Elsewhere, cries for ‘Jinnah wali azadi’ (freedom, Jinnah-style) have been heard, and ignored, as if the bloody massacres of Direct Action Day, 1946, which forced the hand of a bloodier Partition, never happened.

In Kerala, in an extraordinary show of magnificent secularism, the press carried a high-visibility story of a Hindu couple getting married in a mosque in Kayamkulam. According to reports, all expenses were met by the Cheravally Muslim Jamaath Committee there.

This is the age-old, socialist, Amar-Akbar-Anthony-style of harmony-building, which conveniently papers over the vote-banking that happens behind. It won’t fly now.

The more saccharine these stories get (and they will!), the louder people will ask why the local Jamaath didn’t simply make an anonymous donation to the couple?

Why make it a grand media show?

Why advertise your graciousness?

Why share invitation cards a fortnight in advance, on social media?

What was the actual objective here?

But the pertinent point is: why didn’t the press ask these questions of the Jamaath, and probe a bit as they are supposed to, instead of blindly running the story on the front pages?

Frankly, this was only to be expected, and probably wouldn’t have mattered in an earlier decade. But things are different today: people recognise the desperation at work. They also understand the impact: increased alienation, the needless creation of confusion and doubts in impressionable young minds, and a heightened risk of violence.

The new reality is that you cannot market ‘azadi’ in 21 flavours, and then expect your show of empathy for Kashmiri Pandits to be taken seriously. Life doesn’t work that way.

You cannot take out a procession of Pakistani-looking green flags in Kerala, in support of the azadi-chanters, and then expect to be viewed kindly, merely because you funded the wedding of an impecunious couple from another faith.

You cannot say that your grandfather fought for the Independence of India, when he demonstrably did not.

The new reality is that those who condone such acts of sophistry commit the crime of Dhimmitude. They do this nation’s welfare no service, and they cannot be argued with.

So, instead, it is incumbent upon Indians to meticulously, continuously, and laboriously, identify and expose such glib rationalisations, so that the citizenry becomes accurately aware of what exactly is afoot.

An increasingly broader section of the populace must realise that the empty empathy of Dhimmitude no longer holds water, because India has changed. There is no better way forward.