Cologne And Malda: A Tale Of Two Cities And Dysfunctional Enablers 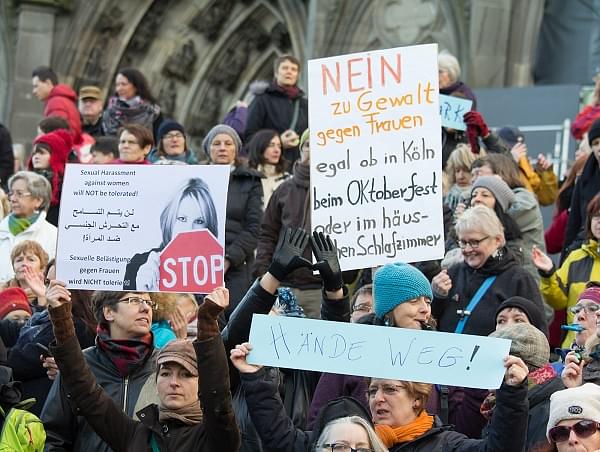 An enabler is a person who protects or helps an addict continue the self-destructive behavior in various ways. In both Malda and Cologne, the administration has emboldened the perpetrators by playing the role of enabler.

On New Year’s Eve in Cologne, Germany, a late night celebration in the city center turned into a nightmare for hundreds of young women. Throngs of over thousand drunk and aggressive men, mostly asylum seekers, sexually assaulted them. The traumatized women later recounted how they were encircled, robbed and squeezed from all sides. Their breasts were groped; underwear torn off and some were raped. The police did not anticipate such a situation and were helpless in the face of the onslaught.

Over the next few days, as the women started reporting what had happened, the news snowballed into an international storm. There was widespread outrage. Politicians and the local administration swung into damage control mode and weeks later, Germany is still grappling with the political and social fallout.

Around the same time, in Malda, a district in West Bengal, thousands of people ran riot. They went on a rampage, destroying public property and tyrannizing locals. The trigger apparently was anger at a man named Kamlesh Tewari, who allegedly made blasphemous comments against the Prophet of Islam. The local media and administration blocked out the news and pretended nothing had happened. However social media went to town with the news. As it slowly started spreading online, few mainstream media channels added to the chorus. When pressure built up, the local administration eventually acknowledged the problem but downplayed it or blamed opposition parties. The botched up justifications and blame-game continues.

At this point, the reader might be wondering why I am clubbing two disparate events in two different continents. Is there a link? The short answer is yes. As a mental health professional, the response of individuals and groups often interest me more than the events themselves. In both these case, the reaction of a certain section, which I call the enablers, is noteworthy.

The term enabler is usually used in the context of a relationship with an addict. An enabler is a person who protects or helps an addict continue the self-destructive behavior in various ways. They may avoid the issue, deny the gravity of the situation, hide evidence, provide excuses, or deflect blame, in order to cushion a person from the consequences of their actions. However, if you look around, you will notice that people act as enablers in many regular situations.

In Cologne, for instance, it has now emerged that the New Year’s Eve incident was not an isolated one. Two months prior to that, a welcome party for refugees had degenerated into a mass groping session, and women had to flee in terror. The matter was hushed up.

By suppressing the news and refusing to acknowledge an obvious problem, the administration emboldened the perpetrators and allowed it to escalate into the New Year’s Eve delinquency.

Due to the scale of abuse, this time, it became impossible to suppress the news and action had to be taken. Even then the mayor of Cologne drew widespread criticism as she advised women how to behave with strangers. Her response is an example of classic enabling. Rather than strongly censuring the bad behavior, and punishing the perpetrators, there was an attempt to restrain victims, implying blame.

Meanwhile in Malda, the administration continues to enable the rioters with soft-action and political posturing to deflect blame. Many sections of the media continue to aid and abet this. For instance, a senior journalist, who failed in his duty to report, accused others of fanning communal flames when they carried the story. The underlying message was to downplay the events. Some others sought to dilute the story by drawing false equivalences.

Now, the logical question that follows is, why do people become enablers? There may be many reasons for this, which include fear, shame, guilt, a need to manipulate others or a misplaced sense of duty. People often tend to confuse enabling with support and empowerment, when in fact it creates a sense of powerlessness or entitlement.

Enabling by politicians is relatively easy to understand and can often be linked to vote-bank politics. Enabling by media may be due to strong ideological affiliations to a particular side, or more commonly, a simple matter of funding. Fear due to political writs may also play some part.

It is harder to explain the enabling behavior by other groups and individuals. For instance, when “feminists” stay silent on incidents like Cologne, or shift blame with accusations of  “xenophobia” or “Islamophobia”, it requires a fundamental reevaluation of core values.

Similarly, when compassionate, educated individuals choose to evade or make light of events such as the Malda riots or Cologne assaults, it raises many questions. Do they act out of pity, fear, or some misplaced guilt? Have they become too jaded to speak up or are they just paralyzed by extreme political correctness?

These are troubling questions that I cannot answer, but I can say with certainty that enabling never helps. It may buy short-term peace, provide an illusion of safety, or make people feel perversely “holier-than-thou”. However, it cannot be a long-term solution. Today, when faced with such issues, we essentially have two options: Deal with the initial discomfort and tackle the prickly subject head on, or let the problem fester and commit slow suicide by political correctness. The choice is yours.