Dalit Priests Are A Welcome Development, But What Did Marxists Have To Do With It? 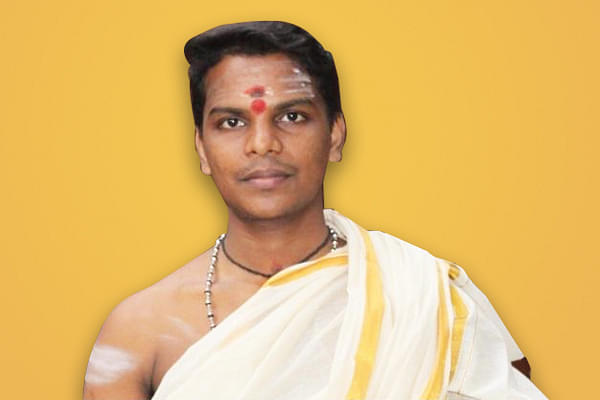 (Yadu Krishnan, one of the newly ordained priests)

Recently there has been the much-hyped story about the appointment of Dalit priests in Kerala’s state-controlled temples. The left-wing government has been praised for the move. With the recruitment of six priests from the Scheduled Community and 36 others from Other Backward Classes (OBC), the Kerala government has earned the kudos of the media.

The old media has showcased this development as a progressive Marxist state bringing radical reforms to the caste-ridden Hindu society battling orthodoxy.

What such media spin and ideological chest-thumping hide or downplay are facts about the decades of ground work that has gone into making the Hindus of all communities priests in the state.

Swami Vivekananda during his visit to Kerala, observing the notorious caste tyranny, famously remarked that it was a ‘lunatic asylum’. He also met during the visit, Chattampi Swamikal (1853-1924), who in 1918 wrote Veda­adhikara Nirupanam in which he established that based on the Vedas all Hindus irrespective of the communities they were born into have the right to study the Vedas. The revolutionary monk along with Sri Narayana Guru (1854-1928) and Mahatma Ayyankali (1863-1941) worked hard to fight against the tyrannical discrimination in the society.

In all these fights against social discrimination, the Hindutva movements of the period like Hindu Mahasabha, actively stood along with these social warriors. T T Kesavan Sastri, president of All Travancore Pulaya Mahasabha, was supported as a student by Mannathu Padmanabhan (1878-1970), founder of Nair Service Society. He was initially taught Sanskrit by Brahma Vidya Pushan P K Pannikar and later his studies in Vedas was taken over by none other than Sri Narayana Guru, who admitted him in the Sanskrit school at Aluva.

So right from the nineteenth century, Kerala has been operating a long and constructive social reform programme, which was run by the Hindu socio-spiritual reformers from all communities. The foundation of this social reform movement, which also fought against proselytising, has always been Vedantic humanism.

This lineage was taken forward not by Marxists, who had nothing but contempt for Vedanta. It was taken up by the Hindutva forces in a systematic way. In 1983, the centenary year of Sri Narayana Guru, Vishal Hindu Sammelan (VHS) was organised by Rashtriya Swayamsevak Sangh (RSS) in Ernakulam. The chief tantrik of the main puja conducted in the sammelan was an Ezhava and his assistant was a Namboodri. The same year saw the founding of the Thanthra Vidya Peedham (TVP) by senior life-worker (pracharak) of the RSS, Madhavanji, along with eminent Vedic scholars.

Since then TVP has been an integral part of the socio-cultural movement that has today culminated in appointment of priests from all Hindu communities without any discrimination. The peetham trains youngsters in all traditional knowledge domains to become qualified priests in Kerala irrespective of their caste. In a public ceremony, the certificates were given to the students trained in TVP by none other than then junior acharya of Kanchi – Sri Jayendra Saraswathi. Roping in the head of an orthodox monastery in launching a programme that many would feel as radical, is a typical Sangh strategy that aims at harmony-oriented social reform rather than create conflict in the name of social reform.

Though typically hyped as leftist achievement in 2017, the phenomenon is neither new to Kerala nor does it depend on a particular political dispensation in power. In 2012, the Travancore Devaswom Board (TDB), the governing body of Hindu temples, had filled up 50 of the 100 posts for priests with non-Brahmins. What was common to both 2012 and 2017 is the presence of TVP in the interview board selecting the priests. So if real credit is to be given, it should be given historically to the great Vedantic seers of Kerala, from Chattampi Swamigal, Sri Narayana Guru, Mahatma Ayyan Kali to Mannathu Padmanabhan and others; institutionally, the credit should go to the Advaita Ashrama established by Sri Narayana Guru and Thanthra Vidya Peedham.

Let us also briefly see who is taking forward this project of social harmony to other parts of India.

When the National Democratic Alliance (NDA)-I was in power, it tried to implement this ‘Kerala model’ of socio-spiritual unification all over India. The University Grants Commission (UGC) introduced ‘Karma Kand’ courses which could be studied by any student irrespective of community, to become a certified priest. In the northern states, where social stagnation has resulted in caste atrocities and deep fractures, UGC-certified priests cutting across community lines would have been a phenomenal aid to social harmony. Interestingly, the move was opposed tooth and nail by Marxists and so-called progressives.

Nevertheless, the paurohitya (priesthood) course launched by Sanskrit Sansthan in Uttar Pradesh did become a success. The priest training course was given a support grant of Rs 14 lakh by the Human Resources Development ministry under Dr Murli Manohar Joshi. It is interesting to note that all these attempts to democratise priesthood had happened under the NDA rule and were not actively pursued by the succeeding governments belonging to the so-called ‘progressive parties’.

In 2006, RSS magazine Panchajanya announced in its editorial that trained priests from Scheduled Communities should be appointed as priests in all “major temples in the country”. The editorial explained that “time has come to strengthen Hindu unity and ensure that along with those priests who are born Brahmins, Dalits and other backward classes are trained and made priests”.

In 2008, a priest from a Scheduled Caste community was made the chief priest of the famous Jagannath temple in Bihar. The renovation ceremony of the temple presided over by the priest Deepak Das, was attended by the then chief of RSS, K S Sudarshan.

It is again a question worth asking why it was only the Hindutva state and central government that have taken the ‘Kerala model’ of social harmony to the rest of India while neither the Congress nor the communists ever bothered to replicate it during their long decades in power, whether at the centre or in states like West Bengal and Tripura. Even in Kerala, let it be remembered that it was the Hindu-conscious social warriors and spiritual savants who opposed conversions, who paved the way for this historical phenomenon and it was from the Sangh that the crucial institutional logistics were provided.

So, what exactly is the Marxist contribution? Nothing – as in n-o-t-h-i-n-g.