Danger In North East: Christian Terror On One Side, Islamist On The Other 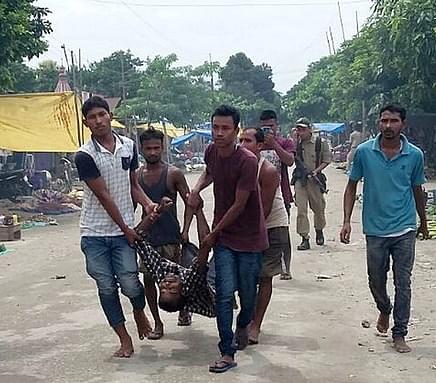 The terrorists entered the market and started firing indiscriminately, and before anyone could know, dead bodies were scattered around and cries of carnage filled the air.

That would describe what happened in the Kokrajhar market attack on 5 August in Assam, or any recent Islamic State of Iraq and Syria (ISIS)-style lone-gunman operation. However, it also draws similarities with the massacre carried out by the National Liberation Front of Tripura (NLFT) at the Singicherra Bazaar in Tripura in 2002. NLFT – a Christian secessionist outfit had issued diktats against the celebration of Makar Sankranthi – the pan-India harvest festival. To punish those who dared to celebrate, NLFT terrorists entered the Singicherra market and shot dead 16 villagers. (16 shot dead by NLFT in Tripura – PTI, 13 January, 2002)

The Kokrajhar attack shows the revival of the old tactics by the North-Eastern secessionist outfits. It may also be indicating some new dynamics in the present changed political milieu of Assam. And it needs serious attention.

In the North-Eastern states, there is a pattern to secessionist terrorism. These terror forces are animated by the dangerously-flawed Marxist theory of linguistic racism. Every tribal language subgroup has been made to consider itself a separate ‘subjugated nation’ and wants to violently eliminate the ‘oppressing nation’. Missionary forces play no small role in creating this violent ethnic divide.

Hindu cultural linkages have evolved organically between different ethnic communities in the North East over the past many centuries. They hold together the different ethnic communities and provide the substratum for the democratic processes enabling them to come together to resolve their conflicts as well as their real and perceived grievances against each other. With such linkages they become the target of the secessionist terror outfits.

Long before ISIS, NLFT and National Democratic Front of Bodoland (NDFB) have been using almost similar tactics for their secessionist terrorism in both Tripura and Assam respectively. The 2002 Singicherra Bazar massacre by NLFT is just one event in the long chain of violent inquisitional terror spread by the Baptist Church-backed NLFT to destroy the local pagan tribal culture with obvious Hindu elements. The target of their attack are the Jamatiyas – an influential tribal community in Tripura. In Assam, among the Bodo community, the NDFB is the terror outfit that works with missionary support.

Eminent journalist Subir Bhamukh, a North East expert, explains how the missionary tactic of using ‘ethnicity to promote evangelisation among tribes’ has ‘covertly pandered to the militant groups’. In turn, the NDFB like the NLFT, is ‘said to be supportive of the church’. NDFB being ‘predominantly Christian’ also ‘supports the Church’s demand for the use of the Roman script for the Bodo language’ and its Christian guerillas have targeted and killed ‘many Bodi intellectuals, cultural icons and writers who oppose the demand’. And this includes even a former president of Bodo Sahitya Sabha. (Troubled Periphery: The Crisis of India’s North East, Sage, 2009, p.50)

In 2008, this organisation coordinated with United Liberation Front of Asom (ULFA), another separatist terror group and executed serial bomb blasts in Assam which left 80 people dead. The Intelligence Bureau sources later discovered that the logistics were provided by a new entrant in the Assamese theatre of terror— the Harkat-ul-Jehadi-Islami (HuJI).

Al Qaeda has been morphing itself into many localised organisations which in turn bring together local rivals engaged in Jihad. In this, HuJI has been an important component for Al Qaeda operations in India. Wilson John, a senior fellow at Observer Research Foundation, a New Delhi-based think-tank pointed out the importance of HuJI to Al Qaeda:

HuJI is a transnational ally of Al Qaeda with bases in Afghanistan, Pakistan and Bangladesh. Former Al Qaeda operational commander responsible for Indian subcontinent, Illyas Kashmiri, was a former HuJI leader; he was also a former Pakistan Army commando and a prized trainer at Lashkar-e-Taiba (LeT) camps. The old network of HuJI could be utilised by Al Qaeda to revive its terrorist agenda in the sub-continent. The Al Qaeda using the HuJI network gains more credence from the radicalisation taking place among Rohingyas in Myanmar. There are a substantial number of Rohingya refugees in India and Bangladesh.

In September 2014, As Sahab, the official media channel of Al Qaeda announced the launch of ‘Qaedat Al-Jihad for the Indian subcontinent’ (Jamā‘at Qā‘idat al-Jihād fī Shibh al-Qārrah al-Hindīyah). In the video posted on social media that announced the formation of the India-centered Al Qaeda group, it was stated that the “entity was not established today, but it is the result of more than two years to efforts to bring together the mujahideen in the Indian subcontinent into a single entity to align with the main group, Qaedat Al Jihad’.

The video has specifically mentioned ‘Burma, Bangladesh, Assam, Gujarat, Ahmedabad and Kashmir’. It showed the spreading of the jihad in India from Kashmir to North East.

There is every possibility that Al Qaeda in India will be perceived differently from Al Qaeda in the United States by the Western media. A pointer in this direction is the Reuters report titled ‘Indian states on alert after Al Qaeda announces local wing’ (4 September, 2014). The feature while reporting the formation Al Qaeda in India states:

Ayman Al Zawahiri’s announcement made two references to Gujarat, the home state of India’s Prime Minister Narendra Modi, a Hindu nationalist. Modi has long been a hate figure for Islamist groups because of religious riots in 2002 when he was chief minister of the state. More than 1,000 people, mainly Muslims, died in the spasm of violence. …Hindu nationalist groups sympathetic to Modi have stirred sectarian tension in recent weeks, claiming there is an Islamist conspiracy to seduce Hindu women and convert them to Islam.

In this video, released on 2 May, Al Qaeda has used a language that indicates a strategic interlinking between the Maoist and North East secessionist elements. It combines the usual enemies of the Left ‘World Bank and Internal Monetary Fund policies with “drone attacks, Charlie Hebdo’s writings, UN charter, official sermons by muftis and Narendra Modi’s utterances” in the war it imagines as being waged against the Muslims. In the 2015 report, the United States Commission on International Religious Freedom (USCIRF) almost anticipates whatever the Al Qaeda video has stated. The report has a separate sub-heading ‘Violations against Muslims’ and it states:

The USCIRF report could well have been a source of inspiration for the speech writers of Al Qaeda’s media cell. Hence it may not be a coincidence that the centre of gravity of Islamic terrorism is shifting strategically to Assam and Bengal, while suddenly the Christian separatist terror group is reverting to their assault weapon massacre strategy which is today globally notorious thanks to ISIS. The sustained campaign against the Modi government with exaggerated and false claims of violence against the minorities, by the leftists and minority communal elements, provide the perfect justification for the terror groups to interlink and launch major terror attacks in Assam.

Shape of things to come?

ISI had invested in Assam from 1999 onwards when it offered help to bring together Assamese separatists ULFA and Bodo separatist NDLF. Though both are internally opposed to each other they both are against the Indian state. With Al Qaeda entering the scene through HuJI, the North East terror outfits and Jihadist forces started providing mutual logistics and foot soldiers.

The one positive change in the whole evolution of the web of terror in North East (NE) is the presence of a BJP government in the crucial state of Assam. The state government should use this opportunity to destroy any possible evolving network between the Jihadist-NE-Church and make the place peaceful and inclusively prosperous.