Darjeeling Unrest Has National Ramifications, Mamata Banerjee Shouldn’t Be Allowed To Mishandle It 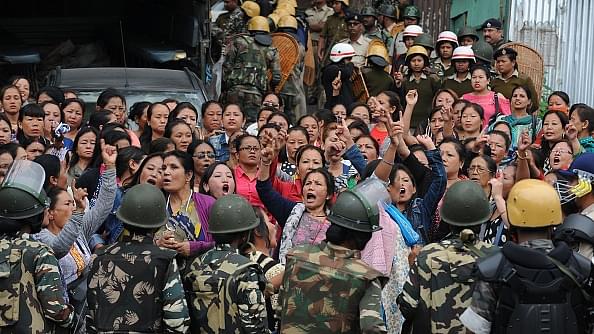 Bengal Chief Minister Mamata Banerjee resists deployment of central paramilitary forces during elections in Bengal. Over the past six years that she has been in power in the state, Banerjee has never sought central forces to tackle internal disturbances in the plains of Bengal, relying solely on her police force to act (or not act, depending on the community involved) in all such incidents.

But when it comes to the Darjeeling hills, it is a different ball game altogether. Ever since trouble broke out in the hills, Banerjee has been insisting on getting central forces to be deployed. She even got the Army, which she had once ludicrously accused of trying to stage a coup, and shamelessly charged Army soldiers (deployed in a drill) of extorting money from truckers at a traffic check-post, to hit the streets of the hill town since trouble broke out on 8 June.

The reason why Banerjee wants the Army and central forces deployed in Darjeeling is that she wants to fire the gun on Gorkhas from their shoulders, with the state police remaining safely behind the battle-lines. Banerjee has a sinister motive in doing so. She wants to suppress the Gorkhaland movement by brute force, but she wants her police (and, thus, herself) to remain free of any blame for bloodshed. She knows that there will be casualties if the movement is to be suppressed by force, but she wants the central forces and the Army to be blamed for those casualties.

Here, Mamata is looking at her immediate political gains and she cares little for anything beyond that. In order to safeguard her political interests, she is even willing to put national interests to grave risk and danger. The Gorkhas are a very proud and emotional race, and the death of three Gorkhas in police firing on agitators in Darjeeling on Saturday has agitated them, hurt them and caused the community no little trauma.

The Gorkhas, as is well known, have a huge presence in the country’s Army and various para-military forces. There are dedicated Gorkha regiments in the Army. There are thousands of ex-servicemen settled in the Darjeeling hills and many more families have their young men serving in the forces. If Gorkha blood is shed in the hills, it is bound to have repercussions in the forces. The dead, the injured, the beaten and the abused in the hills will definitely be some serving Gorkha soldier's or an ex-serviceman's brother, cousin, uncle, relative, friend, neighbour or clansman. It will be infantile to think that the serving Gorkha soldier will remain unaffected by the injustices being suffered by his near and dear ones in the hills of Darjeeling.

And this, thus, poses a grave danger. One only needs to go back to Operation Blue Star in 1984 when Sikh soldiers in the Indian Army became alarmingly restive after the Golden Temple was stormed by army troops and many parts of the holy shrine destroyed. The serious unrest within the Army—many Sikh soldiers deserted the Army while others mutinied as well—could only be calmed after a lot of efforts and took quite some time.

What must also be remembered is that there is a fundamental difference between 1984 and 2017. In this age of instant communication and social media, news (and also rumours) get circulated within a fraction of a second. Serving Gorkha soldiers are well aware of the happenings in Darjeeling and are in constant touch with their families, friends, relatives and neighbours in Darjeeling. Suppressing any news that may excite or anger them (as could be done to some extent in 1984) is impossible today.

Thanks to Banerjee's provocations, her reckless remarks accusing Gorkhaland agitators of drawing sustenance and arms from across the international border and having links with separatists belonging to terror outfits of Northeast India, the heavy-handed manner in which she is trying to suppress the current round of agitation and her ambition to see the Trinamool flag flying in the Hills, the situation in Darjeeling is bound to worsen. It is only a matter of time before families of serving soldiers and ex-servicemen are directly and adversely affected. It is only a matter of time before ex-servicemen join the agitators on the streets to demand Gorkhaland. And as things go from bad to worse, Mamata’s desperation to crush the movement by force will also increase. Thus, there will be casualties.

Ex-servicemen will face blows, and images like this (of a retired officer, Col D K Rai, medals pinned to his chest, blood flowing from his head wound after a police lathi charge on Gorkhaland agitators during the 2007 movement) will take the social media by storm.

The repercussions within the Indian Army can easily be imagined. Banerjee, of course, does not care because she does not have to handle the fallout. It will be the Central government which does; the Prime Minister, the Defence Minister, the service chiefs and defence brass have to grapple with the grave repercussions that can even inflict a long-term damage on our defence forces.

It is, thus, best to prevent such a situation from arising in the first place. Prevention, as is said, is better than the cure. Banerjee has to be stopped in her tracks and prevented from playing with the fire that she has ignited in the hills. Law and order is, admittedly, a state subject. But when a law and order situation in a state threatens to have grave national repercussions and even adversely affect the armed forces of the country, it is imperative for New Delhi to step in and send stern advisories to the state government.

New Delhi should also make it clear to Banerjee that central forces already sent to the hills will not be deployed in the front lines; the Bengal police should tackle the agitators directly. And no force should be used to crush the agitation. If she ignores such an advisory and defies it, the Union government has to step in. Such intervention can take many forms, and in an extreme case (if things start going really out of control in the Hills) even invoking Article 355 of the Constitution to takeover the job of maintaining law and order in the state from the State government.

The situation is already very grave in Darjeeling and has gone beyond the stage of appeals for peace, like this asinine appeal by Union Home Minister Rajnath Singh (who, incidentally, enjoys a good rapport with Banerjee). The agitated and hurt Gorkhas are not likely to withdraw to the safe confines of their homes and allow Banerjee to take over the hills. Banerjee does not like any show of defiance and is, thus, likely to order a more stringent crackdown on the movement. That will have grave consequences which will spill much beyond the borders of Bengal. It is, thus, time New Delhi intervenes. And the task of tackling Banerjee firmly should not be left to her friends like Rajnath Singh.