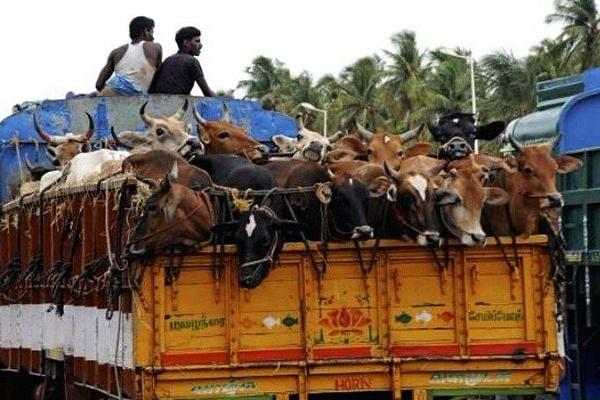 Cattle being transported in an open truck.(Representative image)

Bangladeshi cattle smugglers are getting desperate by the day to smuggle out as much cattle from India through the porous points along the international border. Though the Border Security Force (BSF) has stepped up vigil along the border, cattle smuggling has gone up exponentially over the past few weeks.

This desperation is reflected in the frequent attacks on BSF jawans by smugglers. Earlier this month, Bangladeshi cattle smugglers hurled bombs at a group of BSF jawans who intercepted them. The bomb attack led to one BSF jawan losing his arm. This incident was followed by more attempts by Bangladeshi cattle smugglers. Not only are the latter more desperate now, they have also been trying out novel techniques to smuggle out cattle.

One such technique has left the BSF stunned. Cattle smugglers tie plantain trunks to the cows and push them into the rivers that marks the boundary between the two countries in districts such as Malda, Murshidabad and North 24 Parganas. The cattle then swim over to the other side. What’s more, the smugglers have started booby trapping the cattle.

So why have the cattle smugglers become so desperate? The first reason is that Eid-ul-Azha, popularly known as Bakra-Eid (when cattle and livestock is sacrificed), is fast approaching (it falls on 12 August this year) and the demand for Indian cattle has shot up in Bangladesh. According to the Bangladesh government’s own estimate in 2018, about 10 million (one crore) heads of cattle was ‘imported’ (read: smuggled) from India into Bangladesh every year, and four million (40 lakh) went in during the two month period before Eid-ul-Azha last year.

The second is that the profit margin for such smuggled Indian cattle, which is mostly stolen, is huge. A healthy Indian cow weighing about 400 kilos fetches anything above Taka 90,000 to Taka one lakh (Indian Rupees 73,550 to nearly INR 80,000) in the Dhaka cattle markets before Eid. The price can go up to even Taka 1.2 lakh (about Indian Rupees 98,000) just before Eid. On the Indian side of the border, the Bangladeshi smugglers pay about Indian Rupees 30,000 for such a cow. Thus, it can ultimately sell for four times its Indian price in Dhaka.

Three, there is a peculiar fascination for Indian cows and bulls in Bangladesh. After the BSF strengthened vigil along the international border when the Modi government came to power in 2014, cattle smuggling has gone down and the drop in supply of Indian cattle in the markets in Bangladesh has led to a sharp rise in the price of Indian cows and bulls. This prompted the Bangladesh government to encourage breeding of cows within the country, but Bangladesh’s own cattle is deemed to be inferior to cattle from India.

Cattle is imported (legally, of course) from Australia as well, but those are very expensive and, curiously, is not deemed to be as tasty as Indian beef. Also, the profit margins for cattle imported from Australia is much less. What can, perhaps, explain the Bangladeshi obsession over Indian beef is religious fundamentalism: cows and bulls with faded vermilion marks on their heads — which means they were worshipped by Hindus — command a much higher price than other cows and bulls. Buyers and cattle traders in Bangladesh claim they can make out which vermillion marks are fresh (that means freshly applied by smugglers bringing in the cattle from India) and which are old.
And then, there is an economy that thrives around smuggled Indian cattle. Apart from the killing made by smugglers, the Border Guards Bangladesh (BGB) gets a commission of about Taka 200 to Taka 500 (Indian Rs 163 to Rs 408) for each head of cattle smuggled in from India.

Then there are middlemen and facilitators who also earn substantial sums of money. A trucker earns about Taka 40,000 (over Indian Rs 32,000) for transporting 20 heads of cattle from the border in Malda (India) to Dhaka.

There are illegal toll collections from these trucks. The Bangladesh government itself earned over Taka 2 billion (over Indian Rs 163.4 crore) last year by way of taxes and levies collected from the regulated cattle markets in the country.

Smuggling in cattle from India is, thus, a multi billion Taka business which benefits everyone in the country, starting from the smugglers, Bangladesh Border Guards, police, petty officials, cattle traders and even the government. The more the number of cattle smuggled in, the greater the earnings for everyone. And, thus, the desperation.