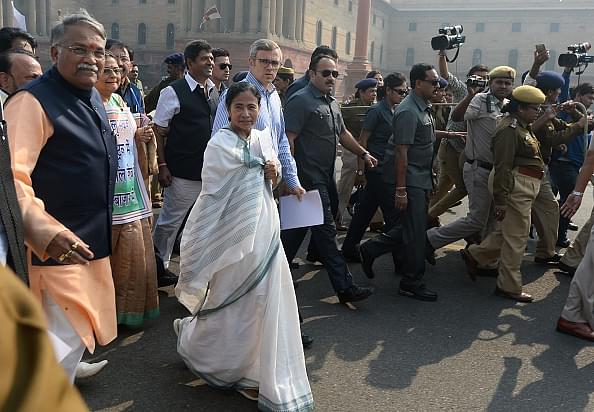 West Bengal Chief Minister Mamata Banerjee and former Chief Minister of Jammu and Kashmir Omar Abdullah walk with other politicians in New Delhi on 16 November to meet the President in protest against the removal of high denomination currency notes from circulation. Photo credit: SAJJAD HUSSAIN/AFP/GettyImages

Yesterday I ran into a friend of mine who spoke about how a party’s entire funding in Punjab got wiped out because of demonetisation (a theory advanced by a well known journalist). Another acquaintance mentioned how the entire dynamic of UP election funding has changed owing to demonetisation.

The continuous protests by the opposition are also being offered as evidence of how black money has caused severe damage to most political parties (opposition in general). Essentially the theory is that demonetisation has suddenly cleaned up the politics of black money.

While political parties demand and raise funds, a lot of funding is supply driven. Supply related funding is driven by a whole host of factors, raising social profile, wanting a ticket or wanting commercial favours. None of these factors will be affected by demonetisation or any other black money initiative.

The predominant belief is that most political funding is in cash. This might be true but the truth is a little complex. Cash funding does not necessarily reside in one central location in the party headquarters. It often resides at various locations and with various people. In many cases, funding could be in cash but suppliers could be paid directly by financiers and not the party. Essentially, the cash lies in so many different places and sometimes in so many different forms (some of it would even be white) that it is difficult for a black money initiative to be fully successful.

The theory that black money cannot be converted to white before 30 December is the grandest of the illusions. A whole range of schemes are underway that seem to suggest that a lot of the money will enter the banking system, even if temporarily. Much of this money will leave the system within a few months after 31 December.

How are parties coping up now?

Firstly, it is a simple fact that the demonetisation action has impacted all political parties immediately. The ability to pay out large sums of money has suddenly diminished and most parties are just about figuring out how to get the money flow going over the next 30 days. This is likely to slow down some of their activities this month across UP, Punjab and Mumbai.

However, my own reading from the ground is that except for two to three prominent parties, there is no visible panic amongst political parties. The opposition to demonetisation should not be viewed as a function of losing out on funding, instead many in the opposition see this is as an opportunity to consolidate lower income voters as well as the trader class that had been the backbone of BJP funding for many years until 2009.

There are a variety of ways in which parties are coping now. One, they are still willing to spend the cash in the old currency as there are still some consumers for the same. This will continue until early December after which the risk of holding such cash increases and the pressure to create false invoices goes up.

Second, parties have begun to find various ways to convert black to white through a variety of party members. The 2.5 lakh cash deposit has opened up a window for all parties. A party needs 8,000 volunteers to deposit 2.5 lakh per person in a state like Punjab to funnel 200 crores through the system. That would amount to about 70 volunteers per assembly constituency, not a big number.

Third, parties are spending money on credit assuming that long term financiers will fund their spending either through cash or cheque over the next two to three months. Lastly, parties have already started efforts to raise money, however, this will take time to build and unlikely to pick up pace before early December.

While demonetisation is likely to impact political parties in the short run, the medium and long term impact is likely to be negligible as negative funding (to curry favours) will continue whether the funding is black or white. Political funding is driven by a host of cultural, legal, affluence and other ecosystem issues that need serious reform and are likely to take a much longer time.

Demonetisation is not the silver bullet to solve many of our concerns with political funding but it is a decent start.