DMK Spars With IPS-Officer-Turned-BJP-Leader ‘Singham’ Annamalai On Language, Its IT Wing Chief Calls Him ‘Clown’ 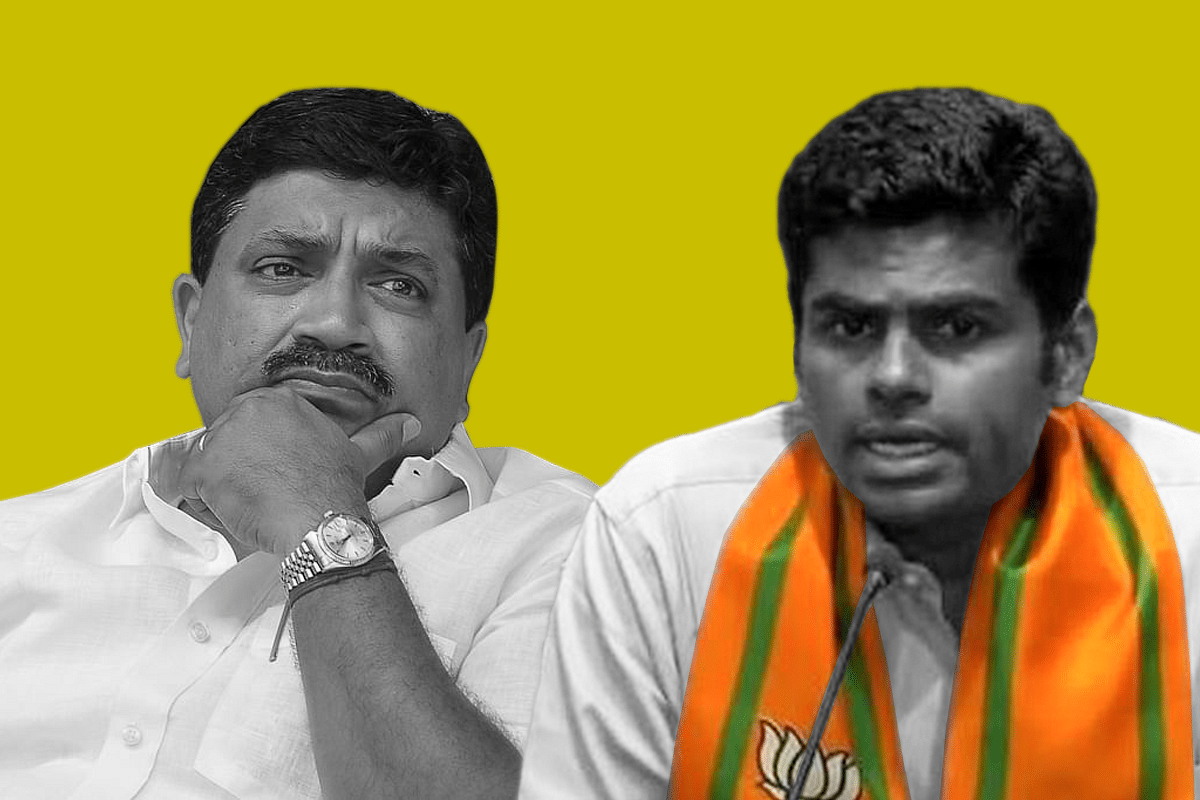 When Annamalai first said he was impressed with Prime Minister Narendra Modi’s demonetisation move in an interview, he was criticised mainly by the DMK, which has been finding fault with every scheme or legislation that the BJP government at the Centre has been implementing or passing.

Then, when he joined the BJP on 25 August this year, the DMK took the lead in trolling him. Probably, the Dravidian party was wary that Annamalai could come out with some embarrassing statements on it given his high profile.

The first of those statements came during his interview to “Chanakyaa”, the YouTube channel of popular television anchor Rangaraj Pandey.

In the interview, Annamalai said that DMK ran “#gobackModi” campaign in 2018 and last year on social media using paid trolls in countries such as Georgia, Mexico and Ukraine.

Annamalai has been open in his views that the BJP and Prime Minister Modi have been portrayed wrongly in Tamil Nadu and said that it could be set right since the state had 45 per cent of its electorate under 39 years of age.

The latest that has provoked the opposition party is his interview to English daily Deccan Herald wherein Annamalai said that the DMK’s politics on the Tamil language issue was like flogging a “dead horse”.

In a telling statement on the Dravidian parties, including the ruling All India Anna Dravida Munnetra Kazhagam (AIADMK), Annamalai said that they would find it hard to overcome issues such as family politics, corruption, scandals and politics within their own families.

“They have MLAs who have served six to seven terms and who do not connect with the young voters,” he said, explaining why the Hindi issue might not pay dividends.

In his efforts to expose the double standards of parties such as the DMK, the former IPS official said that the Dravidian parties were playing with Tamil pride even as Modi was propagating Tamil on his own accord globally.

In a statement that could have disappointed the DMK, Annamalai said that the language issue, on which the opposition party seems to have hinged most of its hopes, would be a zero factor. He also said the opposition to Hindi, including reportedly in Karnataka, has been orchestrated.

More importantly, he said that his views on Dravidar Kazhagam (DK) founder E V Ramasamy, known popularly as Periyar, were in two dimensions — before 1925 and after that. “Periyar was different after 1925 and that is where the problem starts. All they did was abuse God and women in Tamil literature,” he said, touching a raw nerve in the DMK and its members.

This led to DMK member of Tamil Nadu Assembly from Madurai Central and its IT wing chief P Thiaga Rajan tweeting and calling the former IPS official “a clown”.

“.. this clown spouts such nonsense, on such a regular basis, that joke value is too much! So, I will make this one exception. Please check out his statements on Tamil and Periyar, who was in Congress till 1925,” Thiaga Rajan said.

To this, Annamalai responded asking the DMK IT wing chief to read “Periyar’s history properly”.

“See in which party he was in till 1925. Pity you and your obsession. I am wondering where you would be without your ‘great’ forefathers. You would be nobody. But I am a self-made man. Respect that,” he tweeted.

Thiaga Rajan responded to that by saying that every statement of Annamalai and follow-up self-contradiction proved his “imbalance”. He also indirectly questioned his selection to IPS and said he would “go back” to ignoring him.

Social media pointed out that the DMK IT wing had dodged a response to the question which party “Periyar” belonged to before 1925.

E V Ramasamy joined the Congress in 1919 and in 1922, he was elected president of the Madras Presidency Congress Committee. He quit the party in 1925 on the grounds that it was not willing to give importance to the concerns of non-Brahmins.

A social media activist pointed out that Thiaga Rajan owed his position to his “father and grandfather”.

His father PTR Palanivel Rajan was the speaker of the Tamil Nadu Assembly during 1996-2001. In 2006, when the DMK returned to power, he was made the Minister of Hindu Religious and Charitable Endowments (HR&CE) Department but he passed away within a few weeks of being sworn in.

Thiaga Rajan’s grandfather P T Rajan, was chief minister of Madras Presidency from 4 April to 24 August 1936 and Justice Party’s president from 1947-49. This was after a split in the Justice Party when Periyar renamed it Dravidar Kazhagam (DK) in 1944.

Thereafter, the Justice Party was converted into a non-political social organisation. Before the birth of DK, P T Rajan supported Periyar’s secession of Madras Presidency from India.

Some on social media pointed out that Annamalai had come thus far after being born in an agricultural family, whereas Thiaga Rajan had inherited his current status.

One even said that the DMK IT wing chief's were comments “froth with a feudal mindset”. He warned that a similar mindset had led to Congress being wiped out and it could happen to the DMK too.

The problem for DMK is that Annamalai seems to find some or the issue to provoke the party and its leaders. There are others such as vloggers Maridhas, who are also causing problems for the opposition party, which is trying its best to regain power in the assembly elections due in seven months time.

The spat with Annamalai seems to have hurt Thiaga Rajan given the fact that not many in his party have come to his rescue or argue in favour of him.

Probably, Prashant Kishor’s Indian Political Action Committee, which has been hired by DMK to boost its prospects in the assembly elections, had discounted the Annamalai development. And the oversight is being reflected in a telling fashion.