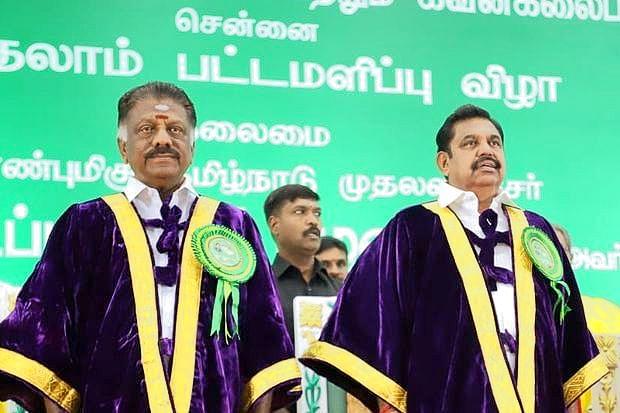 With elections to Tamil Nadu Assembly about six months away, the ruling All India Anna Dravida Munnetra Kazhagam (AIADMK) is caught in an internal wrangle between two factions — one headed by Chief Minister Edappadi K Palaniswami (EPS) and the other by Deputy Chief Minister O Panneerselvam (OPS).

With the mainstream media speculating widely, the development has caused confusion among AIADMK party workers as well as the people and even small issues are being blown out of proportion.

For example, a couple of days ago OPS' driver wanted to change the national flag on his vehicle. But media ran reports of OPS wanting to fly the party flag on his vehicle instead. It was also reported that two ministers had a tough time convincing him to change his decision.

At the centre of the tussle is the issue of the party's chief ministerial candidate for the elections. AIADMK feels it is necessary to project a face as the CM candidate since the principal opposition party Dravida Munnetra Kazhagam (DMK) has projected its president M K Stalin as its candidate for the coveted post.

At that time, OPS, and 17 other legislators owing allegiance to him even voted against the trust motion moved by EPS in the assembly after he was sworn in as the chief minister. Despite OPS group voting against him, he managed to win the trust vote.

The OPS camp says that EPS had assured to set up an 11-member guidance committee comprising senior leaders (five from OPS group and the rest from EPS team) in the party to tend to its affairs. This has not been fulfilled to date.

It now wants the guidance panel to be set up and take care of the party affairs until the elections are over. The OPS camp also says that the panel would be free to nominate a party chief ministerial candidate.

This is being stiffly opposed by the EPS camp.

OPS, on the other hand, is trying to come up with an alternative solution.

OPS' argument is that this will help the party reap a significant chunk of the Vanniyar community votes and also sway the minorities towards the AIADMK.

The Vanniyar community, which has a strong presence in northern and western Tamil Nadu, claims that it makes up nearly 25 per cent of the state population.

The Pattali Makkal Katchi was launched to take care of the community’s interests but it has made little headway in earning the whole community’s trust. The Vanniyar community is believed to lack the unity that Thevar and Gounder communities have shown in rising to prominence in the state.

All the three communities are listed under Other Backward Classes (OBC).

Until J Jayalalithaa was alive, the Thevar community called the shots in the state’s politics and governance, thanks to her aide Sasikala Natarajan who is a Thevar herself.

The Gounder community has gained an upper hand during the current regime of EPS, having returned nearly three dozen AIADMK legislators to the assembly, and with EPS himself being a Gounder.

In fact, the EPS-OPS tussle is seen as one between these two dominant groups. This has even led to fears of the AIADMK being reduced to a 'Gounder community party' if OPS were to leave the party again.

Media reports said that OPS has reached out to T T V Dinakaran, nephew of Sasikala Natarajan, looking for a political direction.

Dinakaran, who tried to force EPS to make way for him in 2017, was expelled from the AIADMK and he has floated his own Amma Makkal Munnetra Kazhagam (AMMK) party.

Two years ago, Dinakaran alleged that OPS had reached out to him to oust EPS and make him the chief minister.

The EPS camp, on its part, has come out with its own justification on why he should be projected as the chief ministerial candidate.

This is something that some observers feel is justified since projecting a different person as the next chief minister means the party indirectly accepts that EPS has not been able to deliver on the tasks assigned to him.

One of the arguments in favour of EPS is that he has overcome innumerable odds to not only continue as the Chief Minister but to also keep the DMK at bay.

An AIADMK source, claiming to be neutral, said “You should know in politics, the opponents will always await an opportunity to pull you down. If he has managed so deftly for over three years, it speaks volumes about his capability.

“All these years, EPS has also ensured that the opposition has not had anything to speak against his governance. You know one issue and in today’s world, how things will go awry. The Chief Minister has not given the opposition any such leeway, though we must admit that there is always a room for improvement.”

Observers point out that it is Prashant Kishor, whose Indian Political Action Committee (IPAC) has been roped in by the DMK to guide it back to power in the elections next year, who has a role to play in the stories running against the Centre and Prime Minister Narendra Modi, and not EPS.

“The only thing the DMK campaign says against EPS is that he is the handmaiden of the BJP government at the Centre,” the AIADMK source pointed out.

The EPS camp claims that even bureaucrats and state government officials have found the current government doing a good job; some even take EPS to be better than his predecessors such as Jayalalithaa and M Karunanidhi.

“One has to hand it to EPS and his ministers for the way they have tackled the coronavirus pandemic. For the last six-and-a-half months, EPS personally has been running around to keep the situation under control and has lost weight,” the sources claimed.

Observers claim that EPS has been working up to 18 hours daily since the middle of March this year and the entire government has been quick to react to the coronavirus-related developments.

“The EPS camp wants the party to go to the people banking on his good track record since he became chief minister in 2017. Going with a different chief ministerial candidate will be like disowning all the good work he has done,” the source added.

AIADMK workers feel OPS quitting the party will not reduce it to a Gounder organisation. The EPS Cabinet has ministers from other communities too and they, including ones from the Thevar community, will continue to be in the party, they say.

EPS and OPS camps will meet tomorrow (3 October) to try and work out a solution so that the party does not suffer a split. Both camps agree that they will stand to lose in case the party breaks.