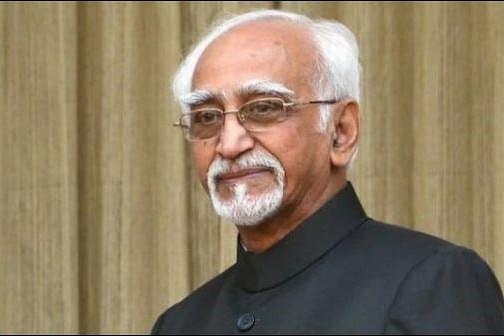 Freed from the restraints of office, former vice-President Hamid Ansari no longer needs a dog-whistle to make stirring claims of minority victimhood. He can now openly espouse his “minority” causes, even if they need some imagination to visualise as a deadly trend that happened only after that vile man Narendra Modi came to power in 2014.

In recent interviews, Ansari has been beating that minority drum again. Consider what he told The Times of India in an interview. Speaking about the Jinnah portrait in Aligarh Muslim University (AMU), Ansari asks: “What’s wrong if the portrait is there? If Victoria Memorial is there, what’s wrong with Jinnah’s portrait?”

This is a nice way of evading the issue of creeping Muslim communalisation where organisations representing conservative sections of the community will oppose everything from the de-legalisation of triple talaq to polygamy, while at the same time calling for sharia courts in all districts of India. The problem is not the portrait itself, but the emergence of the Jinnah mindset among many Muslim groups. This kind of separatist thinking was what created Pakistan, and it has nothing to do with a portrait hanging in AMU. Is the former vice-president now embracing the same mindset?

On the question of sharia courts, which the All India Muslim Personal Law Board (AIMPLB) now wants to extend beyond Uttar Pradesh to the whole country, Ansari had this to say in an interview to ANI: “People are confusing social practices with the legal system. Our law recognises that each community can have its own rules. The personal law in India covers marriage, divorce, adoption and inheritance. Each community has a right to practise its own personal laws.”

Clearly, Ansari will – by implication – also oppose a uniform civil code, since he believes each community must have its own personal laws. The cleaving of the national spirit happens first in the mind, and this is exactly what Ansari seems to stand for. The Jinnah technique of separation is to first say we are different and diverse, which sounds liberal and reasonable, and then lead on to say that everything we do is different – we are two separate peoples, separate nations. We can’t be governed by the same laws.

The Times of India asked him about a function he attended where the Kerala-based Islamist organisation, the Popular Front of India (PFI), was associated. But he claimed he knew nothing about the PFI. And this when PFI has been in the news for all the wrong reasons: it has been accused of encouraging terrorism and murders of political opponents, and a sting exposed it as running a religious conversion factory. Maybe the former Veep does not read newspapers. Maybe he thinks we are all fools.

Then he launches into his formal tale of victimhood of the minorities. When a questioner at The Times helpfully asks him, “Are Muslim citizens being demonised, are they fearful?” he replies: “Muslims are concerned. There is a sense of unease among religious minorities and this is something that has to be addressed. As a citizen, irrespective of my name, my state of origin, my faith, my food habits, I have the same rights as anybody else….On occasion, Muslims are fearful and under siege. Not everybody is, that would be an exaggeration. But there have been incidents that have been commented on within and outside the country. You can’t deny facts.”

While it is fair to condemn and call out Hindu bigotry where it exists, and also the acts of lynching of alleged “cow smugglers” in some parts of the country, the one-sidedness of this statement does not even strike our former vice-president.

The lynchings are essentially a sign of the politicisation of the police forces, and the inability of states to enforce their own laws on cow protection. This is how vigilante groups step in to fill the gap and run protection rackets. If the core issue is not politicisation of the police, we would not have seen lynchings becoming common even in non-cow-related cases, as we saw in many states recently as people thrashed suspects for alleged child-lifting.

Secondly, Ansari may be particularly sensitive to Muslims who may be fearful, but does he ever think that in many parts of the country, Hindus too may have reasons to be fearful? Are Hindus who were ethnically cleansed from Kashmir valley and who now face a Rohingya influx in Jammu as well not fearful? Is the impending religious demographic change in Kerala, parts of Assam, and several districts of West Bengal, Bihar and Uttar Pradesh not reason for Hindus to be concerned? When Muslim mobs destroy a police station in Malda, and attack Hindu neighbourhoods in Dhulagarh, and Hindus start migrating out of Kairana in UP, are these not signs of incipient fearfulness in the majority community?

India is not a country that makes any community feel secure, not least due to law and order failures and a one-sided secularism that often demonises Hindus and then keeps silent when there is reason to criticise other communities for their own shortcomings.

It is worth recalling that even as Ansari was building tales of victimhood on behalf of his community, he made unwarranted remarks against some Hindu organisations that were following the entirely legal route of obtaining equal rights for their community (like getting the state out of temples, for example).

Ansari targeted the Indic Collective and hinted that it had a “loaded agenda” that is “easily discernible.” Getting the state off the backs of Hindu institutions is a “loaded agenda” for the former vice-president, but there is nothing loaded about an AIMPLB’s efforts to create a parallel sharia court system all over India. (Read the Indic Collective’s response to Ansari’s dog-whistle here)

Hypocrisy and double-standards do not appear to have bothered Ansari at all – or his eager interviewers. It is clear that out of office, Ansari is showing his true colours - something the Prime Minister hinted at when giving him a send-off.

A vice-president is not the spokesperson of one community. Maybe, just maybe, Ansari never broke out of the incipient Jinnah mindset and the narrative of Muslim victimhood in India. One wonders if he was ever fit to hold that high office.