Explained: How The Dispute With Nepal Over Kalapani Is A Legacy Of I K Gujral’s Misplaced Altruism 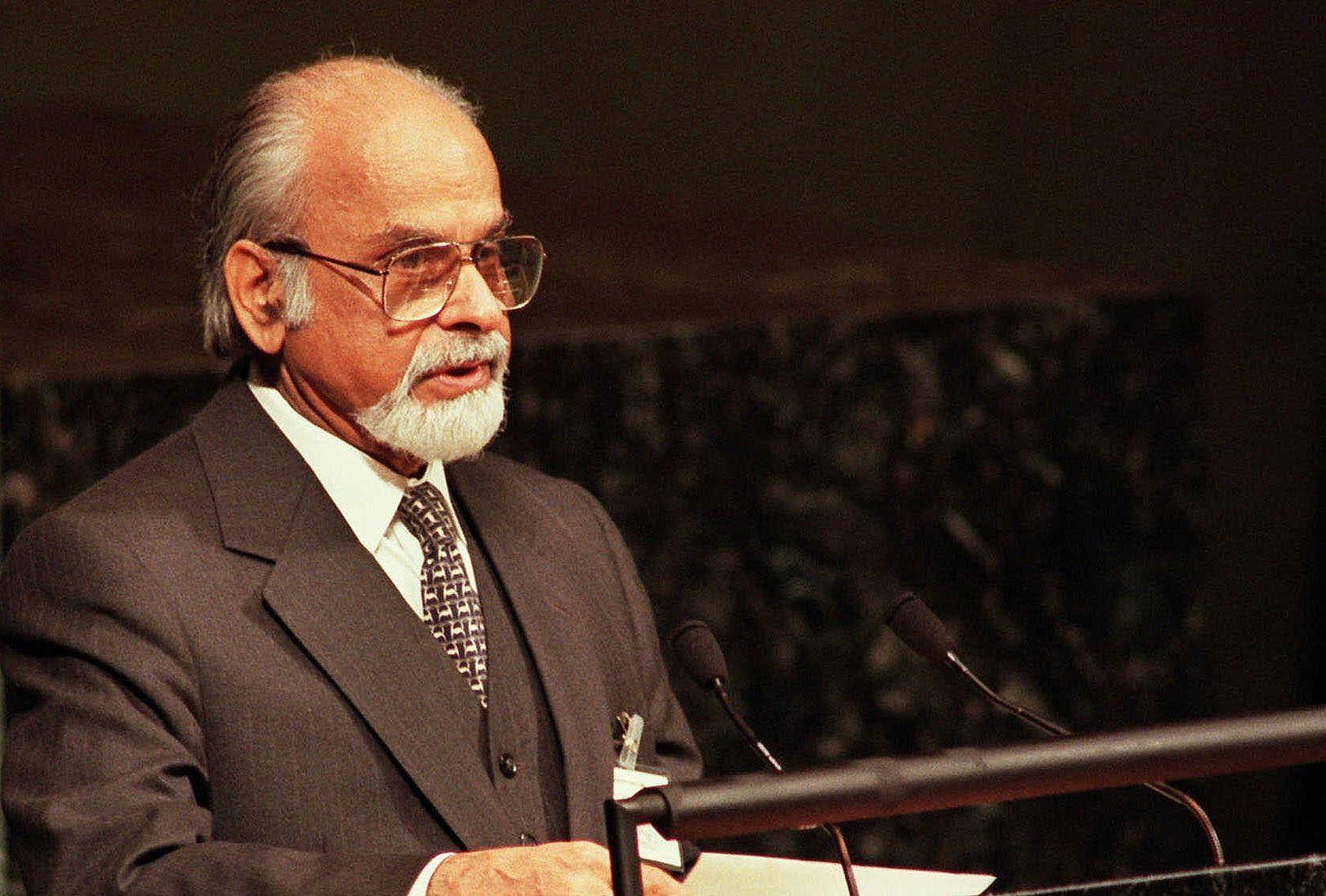 Kalapani and Lipulekh pass have emerged as the latest and ugly flashpoints between India and Nepal. And former Prime Minister Inder Kumar Gujral is to blame for this.

Nepal claims Kalapani, a 35 square kilometer of barren snow-covered rocks at a height of more than 16,000 feet that lies in Pithoragarh district of Uttarakhand, as its own.

Kalapani, strategically located at the trijunction of India, Nepal and Tibet (see this map), is where the sacred Om Parvat is located.

The Lipulekh Pass (marked in red in this map) that leads to Tibet is a border trading post between India and China and lies north of Kalapani.

At the root of this dispute is differing interpretations of the map of this area.

The 1816 Treaty of Sugauli that brought the Anglo-Nepal war (1814-1816) to an end demarcated the Mahakali river as the western boundary of Nepal.

But it’s the origin of this river that causes the dispute.

Nepal claims that Mahakali originates at Limpiyadhura, northwest of Lipulekh, and flows southwest.

India, on the other hand, contends that the Kali Ganga (as the Mahakali is called in Uttarakhand) originates in black water springs at Kalapani (which is how the area gets its name) well below the Lipulekh Pass and flows south and slightly east.

This territorial dispute entered public discourse in Nepal in November last year after India released new political maps depicting the revised status of the earlier composite state of Jammu & Kashmir as the two new Union Territories of Ladakh and J&K (read this).

Nepal’s survey officials examined those maps and claimed that the maps showed Kalapani as Indian territory.

That sparked street and political protests in the Himalayan nation.

Fresh protests broke out about 10 days ago after Defence Minister Rajnath Singh inaugurated a new road to Lipulekh pass on 8 May. Nepal immediately objected and claimed the new 75.54 kilometer all-weather road till the pass which leads to Mansarovar in Tibet actually lies in its territory.

On Monday (18 May), Nepal’s cabinet endorsed a new political map of that country that showed Kalapani and Lipulekh as part of Dharchula district of Nepal.

The new map will be released on Wednesday and the country's official emblem, which features a map of Nepal, will also be amended to show the two areas in Uttarakhand as part of that country.

Prime Minister K.P. Sharma Oli told Parliament on Tuesday that Nepal would “get back” Lipulekh, Limpiyadhura and Kalapani from India.

India has said that the road to Lipulekh has been constructed over a track that pilgrims to Mansarovar have been using for decades.

The international trijunction at Kalapani has a permanent Indian military post that overlooks the surrounding mountains and is of great strategic importance.

Why Gujral Is To Blame

Nepal’s problem with India's control over Kalapani is not old — it was raised when Prime Minister Inder Kumar Gujral visited Nepal in the summer of 1997.

The then deputy Prime Minister of Nepal, Bamdev Gautam, made this claim during an official meeting with Gujaral.

He held the External Affairs portfolio even after he became the Prime Minister.

It was during his stint as foreign minister under Deve Gowda that Gujral came up with what is called the ‘Gujral Doctrine’, a naive and altruistic set of guidelines to steer India’s relations with its immediate neighbours.

One of the salient features of this ‘doctrine’ was unnecessary and damaging (for India) beneficence to Bangladesh, Bhutan, Nepal, Sri Lanka and Maldives.

With these countries, held Gujral, India should accommodate all their demands and give with an open hand without asking for or expecting any reciprocity.

Nepal took full advantage of Gujral’s misplaced altruism and raised the demand for Lipulekh and Kalapani.

To back its demand, Nepal came up with the unjustifiable premise that the Mahakali (or Kali Ganga, as it is called in India) river originates at Limpiyadhura, north of Kalapani where it actually originates.

Since the Limpiyadhura flows in a south-westerly direction (to the west of Lipulekh and Kalapani), Nepal claims that all territory east of Limpiyadhura belongs to it.

Instead of telling Bamdev Gautam that the demand is unjustified, Gujral accepted Nepal’s contention that the area is disputed and agreed to refer the issue to a joint technical-level boundary committee headed by the surveyor generals of the two countries.

A joint statement issued at the end of Gujral’s visit said that Nepal’s demand for Kalapani and Lipulekh would be examined by the boundary committee and a mutually acceptable solution found.

This, say diplomats, was a huge blunder.

“Gujral was obsessed with leaving his imprint on ties with South Asian nations and in making his doctrine the cornerstone of India’s foreign policy. So he bent over backwards to accommodate our neighbours and gave away a lot without getting anything in return. His disastrous foreign policy decisions set us back and did a lot of damage to the country,” said a retired foreign service officer.

It is Gujral’s acceptance of Nepal’s stand that it has a claim over Kalapani and, hence, it is disputed territory that should be studied and resolved by the boundary committee that Nepal is now citing to dispute India’s claim that Kalapani has always been part of India and was never a disputed territory (read this).

Kathmandu has referred to the joint statement issued after Gujral’s visit to assert that Kalapani has been part of the bilateral agenda on border demarcation for more than two decades.

Had Gujral simply told the Nepali leaders that fresh demands for Indian territory was not acceptable, as he should have, the situation would not have come to such a pass. \

“Gujral ought to have told the Nepali leadership that fresh demands for territory is not acceptable and only existing disputes would be resolved through surveys and negotiations,” said the foreign service officer.

Other Costly Blunders By Gujral

Another senior IFS officer who was posted in the political wing of the Indian embassy in Kathmandu during Gujral’s 1997 visit to Nepal recalled that accepting this fresh demand and putting it on the bilateral agenda was not the only gaffe that he committed in Kathmandu.

He recalled that Gujral openly declared that he was “totally dissatisfied” with his own government’s aviation policy and asked (India’s) civil aviation secretary who was accompanying him to take note.

The context was Nepal’s extraordinary and unjustifiable demand for fifth freedom rights for any airline registered in that country.

India’s civil aviation ministry turned down the demand since that would have opened the doors for airlines of other countries to register themselves in Nepal and pick up passengers from India to international destinations, thus harming Air India.

Gujral was in favour of granting Nepal this excessive demand even if that would have led to Air India suffering huge losses.

Gujral had, while he was foreign minister, had got Prime Minister Deve Gowda to overrule civil aviation ministry’s strong objections to non-reciprocal favours demanded by Air Mauritius, resulting in huge losses for Air India and suspension of its flights to South Africa.

“Gujral committed a cardinal mistake by criticising his own government’s policies on foreign soil simply to please his hosts. That was completely unnecessary and amounted to scoring a self-goal. The visit was a disaster and the damage it did to India’s interests took a long time to repair,” said the IFS officer who retired as a secretary in the Ministry of External Affairs (MEA).

Gujral was strongly advised against going to Nepal since that country was in political turmoil and the government under Lokendra Bahadur Chand was very unstable.

Gujral, a self-obsessed man harbouring unrealistic visions of leaving his imprint in the country’s and the region’s history, ignored the MEA’s advice.

As Indian diplomats had predicted, the Chand government fell less than four months after Gujral’s visit.

Gujral’s short tenure also came to an abrupt end in March next year. But the damage he inflicted was long lasting.

A major blunder committed by Gujral was with regard to Pakistan. He banned all covert operations by the Research & Analysis Wing (RAW) in Pakistan and asked the agency to roll back its activities in the neighbouring country (read this).

Gujral, in what amounted to a grave anti-national act, gave out details of RAW’s covert agents in Pakistan to that country’s leadership, as a result of which all those assets were arrested, tortured and executed.

Gujral’s motive was to improve ties with Pakistan and he hoped, falsely and naively, that Pakistan would be impressed and respond similarly to his altruistic gesture.

Gujral had also ordered the Intelligence Bureau (IB) to stop its surveillance on Pakistani diplomats in India.

The Kalapani issue is, thus, a legacy of Gujral’s blunder, quite akin to Nehru referring the Kashmir issue to the United Nations.

It is the country that is having to pay for the mistakes committed by those Prime Ministers.