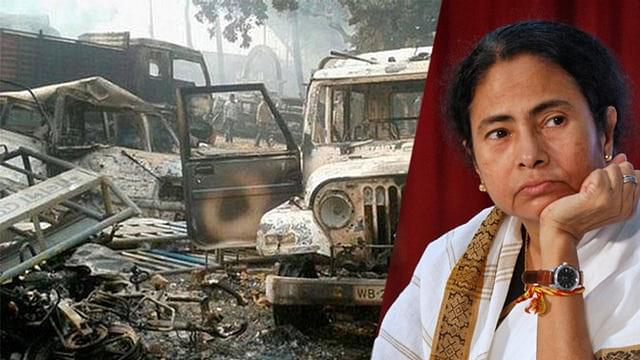 In a chilling repeat of last year’s Kaliachak and Dhulagarh riots in which hundreds of villagers were assaulted and molested, their homes and shops looted and torched and temples desecrated, Islamist mobs are on a rampage at Baduria and Basirhat, about 60 kilometres east of Kolkata, since Monday afternoon. Scores of houses and shops belonging to local Hindus have been looted and burnt, vehicles set on fire, roads blocked and a large number of villagers assaulted and molested.

The trigger is an offensive facebook post denigrating a Muslim shrine by a teenager living at Rudrapur, a small hamlet under Baduria police station’s jurisdiction. The teenager was picked up by the police in the wee hours of Monday, but the Islamists are demanding that the police hand him over to them so that he can be stoned to death as per the Sharia which recommends this form of barbaric punishment for blasphemy. Mobs shouting incendiary religious slogans have laid siege to the Basirhat thana which, incidentally, hosted an iftar party a few days ago — where they suspect the teenager has been lodged.

The teenager posted an offensive cartoon denigrating a holy pilgrimage site of Islam on Saturday. The post justifiably sparked angry reactions and demands for the teenager’s arrest. While the boy removed his post, the police arrested him at about 3 am on Monday and slapped various charges on him.

However, the police action did not satisfy the angry Islamists and, egged on by fiery sermons by some local maulanas, they demanded that the boy be dealt with as per the Sharia. They took out a series of processions on Monday demanding that the arrested boy be handed over to them to be stoned to death in public. The boy’s home was also ransacked and torched and his parents, siblings, cousins and relatives reportedly assaulted.

The Islamist mobs went on the offensive from Monday afternoon when they blocked roads with felled trees and burning tyres and started stoning vehicles. Many sustained injuries, some of them serious, in this. A mini-truck carrying a body was damaged while on its way to a crematorium and the bereaved family was forced to carry away the body on their shoulders. Ambulances carrying patients have been stopped and the ailing forced to get down.

Moreover, processions marking the end of Bhagwan Jagannath Rathyatra (also called ‘ulta rath’) on Monday were disrupted and the raths destroyed and desecrated. Shrines in the homes that were looted by the Islamist mobs were also desecrated and the murtis of gods and goddesses broken, trampled on and desecrated.

Trinamool Congress Lok Sabha MP Idris Ali, who represents Basirhat, was heckled by angry Islamist mobs when he rushed to his constituency to placate them. “We will not listen to anything. We want the boy and punish him as per the Sharia so that no one dares insult our religion ever,” they shouted at the MP. Senior police officers said that radical Islamist clerics who have entrenched themselves at Basirhat, which is on the Indo-Bangladesh border and has seen a demographic change over the last few decades due to unchecked illegal influx of Bangladeshi Muslims, are controlling the mobs. Local criminals are also taking advantage of the situation to loot homes and business establishments, the officers said.

The police, ostensibly under strict instructions from the state’s political leadership, have remained confined to their thanas. The strategy, which the Trinamool government has been following in similar cases in the past, is to let the angry Islamist mobs vent their ire on Hindus in the hope that once the anger dissipates, senior Muslim clerics in the Trinamool’s stable can be deployed to restore calm.

The police, say local Hindus, are nowhere to be seen. However, as in the past (in Kaliachak and Dhulagarh), the state administration has clamped down on the media and issued strict instructions that the riots should not be reported. The police are also keeping a strict watch on social media to prevent news of the perfidy at Baduria and Basirhat from spreading. At the same time, the police are alert to any attempts by Hindus to organise themselves and resist Islamist mobs, fearing that this would spark full scale communal riots. A few men at Basirhat affiliated to various Hindu groups have been warned over phone by the police from attempting to organise the Hindus.

This strategy — of giving Islamists a free rein to rampage and target victims while clamping down on Hindus to prevent them from retaliating — has been perfected over the past six years by the Mamata Banerjee government.