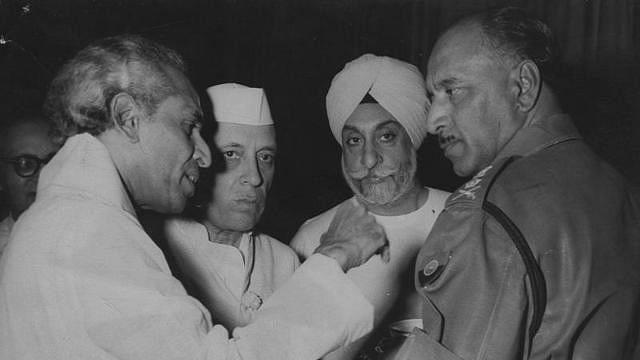 Addressing a rally on Thursday (3 February) in Karnataka’s Kalaburgi, Prime Minister Narendra Modi launched an attack on the Congress for insulting two of the greatest military heroes of the state – Field Marshal K M Cariappa and General K Thimayya.

“In 1948, it was under… General Thimayya’s leadership that the war against Pakistan was won. But after that victory, the saviour of Kashmir, General Thimayya was repeatedly insulted by then Prime Minister Nehru and then Defence Minister Krishna Menon. And it was for this reason, his honour that General Thimayya had to resign from his post,” Modi was quoted as saying by the Indian Express.

Modi’s statement created a storm on social media, with the Congress claiming that the Prime Minister had gotten the facts wrong. The party’s communication in-charge Randeep Singh Surjewala attacked the Bharatiya Janata Party, saying, “Gen Thimayya became Army Chief only on 8th May 1957 and not 1947 as you alleged. V K Krishna Menon was ambassador to UK between 1947-52 & not Defence Minister.”

Many others, including historian Srinath Raghavan, also raised questions on Modi’s statement, saying Jawaharlal Nehru had not insulted General Thimayya.

So, was Modi’s speech in Kalaburgi short on facts?

The short answer, no.

Military historian and filmmaker Shiv Kunal Verma, in his book 1962: The War That Wasn't, describes the equation between Nehru, Menon, and Thimayya.

In September 1959, Verma writes, Nehru had castigated Thimayya in Parliament, accusing him of “wanting to quit in the midst of the Sino-Indian border crisis”. He had also blamed Thimayya, who had offered to resign from his post over disagreements with the political leadership on issues of national interest, for doing so because of issues that were “rather trivial and of no consequence”.

“On 2 September 1959, the prime minister once again rose in Parliament to make a statement. He told the Lok Sabha that he had persuaded the chief to withdraw his resignation. He then went on to speak about the supremacy of the civilian authority over the military and then, had surprisingly, proceeded to castigate Thimayya, saying the issues that led to his resignation were ‘rather trivial and of no consequence’, and that they arose ‘from temperamental differences’. He then chided the chief and reproached him for wanting to quit in the midst of the Sino-Indian border crisis,” Verma writes in his book, which provides a clear picture of the 1962 war.

Thimayya was, as the Prime Minister claimed, also treated badly by Menon. As defence minister, Menon had differences with Thimayya on a number of issues. However, when the General approached Nehru directly to express his disagreement over Nehru’s decision to make the North-East Frontier Agency (now Arunachal Pradesh) the responsibility of the Army, Menon criticised him for not discussing the matter with him and threatened Thimayya of “possible political repercussions”. It was after this meeting that General Thimayya offered to resign from the Army.

“Krishna Menon sent for Thimayya in ‘a highly excited state of mind’ and vented his anger at the chief for having approached the prime minister directly, suggesting instead that the matter should have been resolved at his level. Threatening Thimayya of ‘possible political repercussions if the matter became public’ Krishna Menon ended the meeting. A seething Thimayya returned to his office, and after a conversation with his wife, Neena, promptly sent in his resignation,” Verma writes.

Now, moving to the question of dates and Thimayya’s relation with the first India-Pakistan war over Kashmir fought soon after independence.

Modi’s assertion that the 1948 war was won under Thimayya is correct.

Thimayya served as the General Officer Commanding of Jammu and Kashmir Force, which later came to be known as the Nineteenth Infantry Division, during the war. He led the Indian attack on Zoji La, successfully driving out the Pakistan Army regulars and tribal raiders who had invaded Kashmir.

Thimayya is also credited with successful deployment of the tanks of the Seventh Light Cavalry to a high-altitude area during the war.

Modi would have certainly been wrong had he said Thimayya was the chief of the Army in 1948. It is hard to say whether the manner in which Modi referred to Thimayya (“under Thimayya’s leadership”) was intentional or by mistake. What he did get right was the fact that Nehru and Menon did not treat Thimayya well and that the famous military leader had a key role in the first Kashmir conflict.