Fact Check: Did Rahul Gandhi Lie About The Doklam Stand-Off In London? 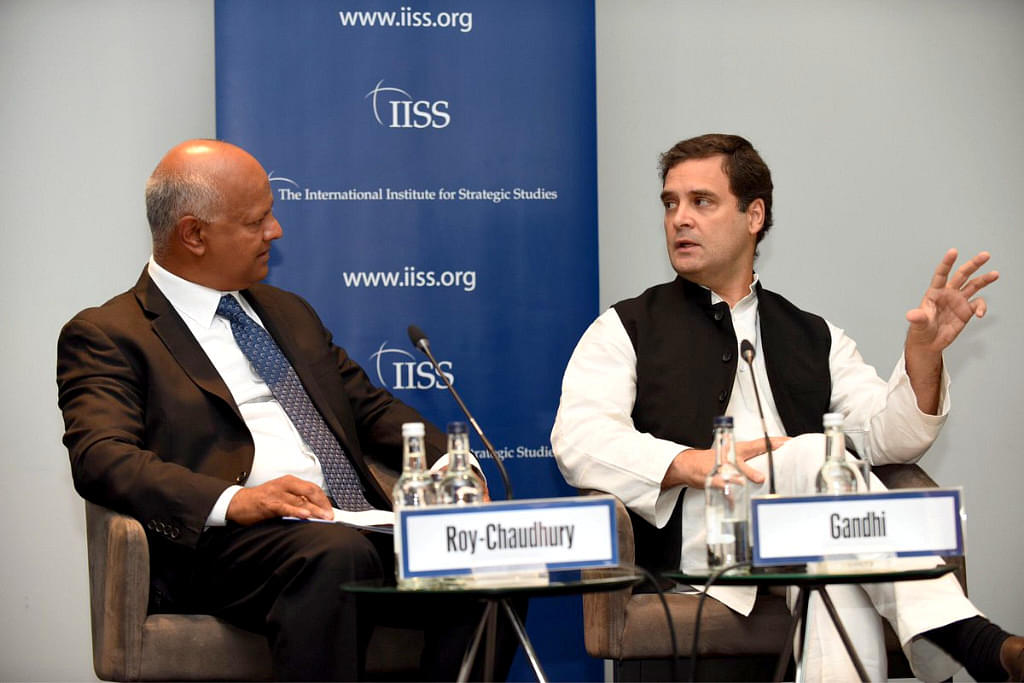 Rahul Gandhi during his address at IISS in London. (IISS/Twitter)

Congress president Rahul Gandhi, who finished his two-day tour of London with an address to the Indian Overseas Congress on Saturday, has stirred yet another controversy with his statement on the Doklam stand-off on foreign soil.

At multiple occasions during his four-day tour of the United Kingdom and Germany, Gandhi accused the Indian government of mishandling relations with Pakistan and China, and failing to ‘stop’ the Doklam stand-off.

Responding to a question at the International Institute of Strategic Studies (IISS) in London on whether he would have handled the situation at Doklam differently, Gandhi claimed he could not comment as he had “no details”.

"I don't have the details of Doklam so I can't answer how I would have handled it differently," the Congress president said in response to the query.

Even as Gandhi claimed he had no details, he went against India’s official position saying the "Chinese are still in Doklam".

So, did he really have no details on Doklam? Or was it an evasive reply – an attempt to cover up his lack of vision, which Gandhi has accepted as being true? These facts should offer some clarity on the issue.

One, Gandhi is a member of the parliamentary standing committee on external affairs which had examined the various aspects of the 73-day long India-China military stand-off in Bhutanese territory. The 19-member panel is headed by Congress Member of Parliament Shashi Tharoor, who had served as the Minister of State for External Affairs between 2009 and 2010.

The committee, during the course of the crisis and at multiple occasions after the disengagement of troops at Doklam, was briefed by top officials involved in the resolution process, including former foreign secretary S Jaishankar, present Foreign Secretary Vijay Gokhale, Defence Secretary Sanjay Mitra and former chief of the army staff General Deepak Kapoor (retired).

Former ambassador to China, Nalin Surie, and military intelligence veteran Vinayak Bhat were also called to brief the committee on the issue.

Gandhi had, during a briefing by Jaishankar, asked the officials about the build up of Chinese forces along the border in the Sikkim sector. Later, Tharoor had accepted that “it was an intense and interesting meeting”.

The committee has even prepared a detailed report on the crisis, which contains testimonies of these officials. Tharoor has submitted the report, largely critical of the Narendra Modi government, to the Ministry of External Affairs.

According to this report, the officials had provided a detailed account of Doklam crisis to the parliamentary committee. At one point during the briefing on Doklam, Jaishankar even explained the angle of sight from the Indian and Bhutanese sides for information about the activities of the Chinese troops.

Two, even when the two countries were caught in an intense military stand-off, Gandhi had met Chinese Ambassador Luo Zhaohui at the country’s embassy. Interestingly, the Congress had initially denied that the meeting took place. Congress spokesperson Randeep Surjewala had tweeted that the news was "planted" by government agencies through "bhakt channels". However, the party had conceded after the Chinese embassy put out a press release on its website. The release was hastily deleted from the website after Congress’ denial.

Back then, the Congress president had defended the move saying it was his “job to be informed on critical issues” concerning India’s security.

It is my job to be informed on critical issues. I met the Chinese Ambassador, Ex-NSA, Congress leaders from NE & the Bhutanese Ambassador

Gandhi had also met Bhutanese Ambassador Major General Vetsop Namgyel to discuss the Doklam crisis. As he admitted in his tweet, he also discussed the crisis with former national security adviser Shivshankar Menon and leaders of the Congress party from various Northeastern states of India.

Therefore, it is unlikely that the Congress president had no details on Doklam.

His statement at the event, where he claimed that the government had mismanaged the crisis and he would have handled it differently, could not have been made without a detailed review.

But even if one accepts Gandhi’s claim, his trouble wouldn’t end. In this case, did he make such statements on an issue concerning India’s security without having details? He has questions to answer when he is back in New Delhi.