Fact Check: Who Were Behind The Tweets Trending Against Modi Visit To South India On 1 March 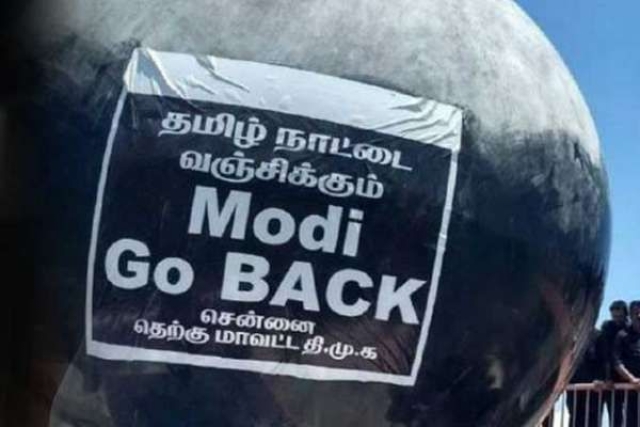 On 1 March this year, when Prime Minister Narendra Modi visited Tamil Nadu to inaugurate a slew of government schemes, the social media was bombarded with #Gobackmodi tweets.

“#Gobackmodi trends on Twitter again as PM visits Tamil Nadu” screamed a headline on HuffPost India. The report, ascribed to “newsroom”, said people in the state were not keen in having him over.

The report quoted unnamed Twitteratis as saying that Modi’s “gimmicks” were unlikely to work in Tamil Nadu and the Bharatiya Janata Party was irrelevant in the state.

What should have aroused media’s curiosity, instead of rushing to publish half-baked news reports, is why should such an issue trend on Twitter, especially when the Modi government gave a befitting reply to the Pulwama attack by providing a free rein to the defence forces to dismantle terror camps in Pakistan, with the action being hailed across the nation.

The trend gave rise to comments that Tamil Nadu was, perhaps, emerging as another Kashmir and a hotbed for anti-nationalists. But those trying to plant these propaganda failed to notice certain developments that have taken place since January.

What many did not take note of was that the same day, the Prime Minister visited Visakhapatnam in Andhra Pradesh. What has this to do with the tweets against Modi, you many wonder. Find the answer at the end of this analysis with the relevant data.

On 27 January this year, when Modi visited Madurai to lay the foundation stone for the All-India Institute of Medical Sciences (AIIMS), #Gobackmodi was one of the top trends on Twitter.

No doubt, the Dravida Munnetra Kazhagam (DMK) and Congress Twitter handles worked overtime to have this hashtag trending. In particular, the tweets picked up pace between 8.30 am and 10 am on 27 January, that too a Sunday when over a lakh retweets were sent. A clear indication of the forces at work.

When Modi returned to Tamil Nadu again on 9 February, the #Gobackmodi tweets reappeared but with less vigour. The Prime Minister was visiting the state after the Budget, and the announcement of income tax rebate of up to Rs 5 lakh and a few other decisions seemed to have taken the sting out of his opponents.

Then, it was a surprise why the trend picked up again on 1 March – a surprise, especially amid a pro-Modi wave after the Indian Air Force (IAF) launched an attack on Jaish-e-Mohammed (JeM) training camps at Balakot in Pakistan in response to the terror group’s Pulwama attack, killing over 40 Central Reserve Police Force personnel.

It was a surprise as #Gobackmodi was trending soon after Pakistan Prime Minister Imran Khan, under immense international pressure, announced that his country would hand over IAF Wing Commander Abhinandan Varthaman, who landed on Pakistan soil after he lost control of his MIG-21 while resisting a Pakistan Air Force attack.

That led Swarajya to analyse the #Gobackmodi trend on 1 March and the data collected was revealing. From the midnight of 28 February to late evening of 1 March, the number of #gobackmodi tweets were 2,26,731.

An interesting feature of the whole tweeting is that the trend picked up around 2 am on 1 March with over 8,000 tweets and then maintained the five-figure mark until noon that day when 10,397 tweets were transmitted. At 6.14 am, the number of tweets per minute peaked with 14 tweets being transmitted within a minute.

These are simple statistics. Now, let us go into more details. Though there were allegations that the Twitterati from Pakistan were mainly behind the tweets, they were only partly true. A third of the tweets emanated from Pakistan with a little over 48 per cent originating from India.

Similar tweets were sent from the United Arab Emirates, Saudi Arabia, the United Kingdom, the US and even from China (1.01 per cent) and Hong Kong (0.81 per cent). This is country-wise, but if you were to go by city-wise or place-wise statistics, it can lead you to more interesting facts.

In terms of language, over 61 per cent of the tweets were in English, some 13 per cent in Tamil, over 9 per cent in Hindi and a little over 8 per cent in Urdu.

Further analysis of the tweets had more interesting data to offer. Tweepler analytics took a sample of 600 recent tweets over a period of two to three days and found that Shahid Prince (@shahid_prince11), a Twitterati from Islamabad, has his tweet against Modi retweeted nearly 2,900 times.

But the second highest retweet was from an Indian account, a politician who is neither from Tamil Nadu nor someone from the Congress nor the Dravida Munnetra Kazhagam (DMK). Wondering who it could be?

The second-largest influencer of the tweets against Modi was Nara Lokesh, son of Andhra Pradesh Chief Minister N Chandrababu Naidu and the State Minister for Panchayat Raj. Nearly 1,500 retweeted his tweets against Modi that combined with tags like #BJPcheatedAP and #ModicheatedAP.

Lokesh had tweeted against Modi’s visit to Visakhapatnam that was also tweeted by TDP. Party workers picked up the cue from their youth leader, and this helped the trend against Modi to some extent.

Among those who were actively involved in tweeting against the Prime Minister were many Pakistani citizens, Khaleej Mag and a DMK IT wing coordinator from Karur.

One important factor to remember is that not all the 2.26 lakh-odd tweets were opposed to Modi’s visit. This is because tweets of even those who took on these anti-Modi brigade were included in this count.

Analysis of the tweets against Modi is a clear reflection that Tamil Nadu wasn’t the place or region from where the trend dominated or emanated. In fact, the anti-Modi media has simply closed its eyes to the trend to paint a wrong picture of Tamil Nadu.

On the other hand, it is clear that forces in Pakistan and a couple of other countries joined the anti-Modi brigade in India to spread a wrong impression about the Prime Minister.