Five Reasons Why K Chandrashekar Rao Is Struggling In Telangana 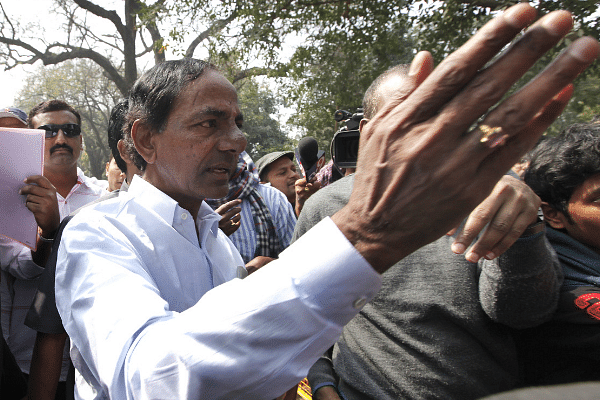 The core base of KCR’s Telangana Rashtra Samithi is disappointed. (Arvind Yadav/Hindustan Times via Getty Images)

ABP–C Voter in its polling predicts that K Chandrashekar Rao (KCR) is expected to lose in the Telangana state assembly election. This is surprising considering that KCR is the tallest leader in the state and is, after all, credited with the creation of a separate Telangana.

The state votes on 7 December along with Rajasthan. In an unexpected move, KCR dissolved the House in September 2018, seven to eight months ahead of schedule. Early opinion polls carried out in September-October suggested a Telangana Rashtra Samithi (TRS) sweep. However, ABP–C Voter poll results suggest things are not as smooth for KCR as projected earlier.

To note, ABP–C Voter poll is the only one that has been released after the formation of the grand alliance of Congress, Telugu Desam Party, Communist Party of India, and Telangana Jana Samithi in the state.

The TRS, which won 63 seats in the 2014 assembly election, consolidated its position in the House when 27 members of legislative assembly (MLAs) from other parties defected and joined KCR’s party, taking its strength to 90, enjoying a three-fourths majority. The Opposition alleged that KCR used money, muscle power, and offered ministries to MLAs to wean them away. Some opinion polls are erroneously taking the base as 90 in making future predictions while the correct base of seats as well as vote share is the 2014 performance. TRS had then scraped through with a simple majority, 63 as against the 60 required, mainly because of split in Opposition votes, at the peak of the Telangana movement. Now, that euphoria has subsided, and people are expected to rate KCR on his performance in office.

The state is considered by many political analysts as Opposition-less. So, what’s gone wrong suddenly?

The Opposition, led by the Congress, has come together and formed a mahagathbandhan (grand alliance) consisting of the Telugu Desam Party (TDP), Communist Party of India (CPI), and Telangana Jana Samithi (TJS). They have also successfully concluded the seat-sharing talks between the constituents after more than a month of negotiations. The Congress, being the largest party, will contest 93 seats, while TDP, CPI, and TJS will contest 14, 3, and 8 seats respectively.

The parties contesting separately garnered 40.8 per cent vote share, 6.5 per cent more than the TRS vote share of 34.3 per cent. Had the three parties contested together in 2014, TRS would have lost 12 of the 63 seats it won, resulting in a hung assembly in the state.

While KCR is popular, local anti-incumbency against MLAs is troubling him. We have seen across many states that people are happy with the chief minister but angry with their MLAs because of non-performance and unapproachability among other factors. The thumb rule is that one-third of the voters each vote on the basis of the chief ministerial candidate, party, and local candidate. These one-third voters could prove to be worrisome for KCR, especially when he has not changed any MLA, brushing aside the local anti-incumbency factor.

Additionally, the 27 people who have switched sides are also facing the heat from their erstwhile parties. The grand alliance is pitching strongly to teach these people a lesson. These MLAs do not necessarily represent their old party in those seats, as there is always a cadre vote of big parties like the Congress, TDP, and CPI. These cadre voters may not back these party hoppers this time around.

Historically, most leaders who have asked for snap polls have lost. Vajpayee lost in 2004 when he called for pre-polls despite the India Shining campaign. All opinion polls as well as exit polls predicted Bharatiya Janata Party (BJP) victory at that time, and nobody saw it coming. Few could have imagined that the popular prime minister Atal Bihari Vajpayee would lose, that too against Italian-born Sonia Gandhi. Chandrababu Naidu lost in similar circumstances in united Andhra Pradesh in 2004.

So, KCR has taken a big risk. History is not on his side.

The ruling party president Amit Shah’s visits and strategy have given a lease of life to the BJP in Telangana, which is determined to play the role of kingmaker. It is playing up the 12 per cent reservation demand for Muslims by KCR, accusing him of minority appeasement and trying to consolidate the Hindu votes. It’s not that easy though, like the Hindi heartland, where polarisation helps a party. The BJP bagged five seats in the 2014 election with 7.1 per cent vote share. “For 15 days, if the Shakti Kendra president goes to their respective booths and follows the 23-point guidelines suggested by the party, I guarantee you that we can achieve victory in Telangana,” he said in Hyderabad on 10 October 2018. In a multi-cornered contest, the BJP sniffs a chance to play a key role if a hung assembly emerges.

Employment for the local youth was the key issue around which TRS rallied young people during the Telangana statehood movement. The youth of the state were so involved in the movement that they forced KCR to continue the hunger strike that he abruptly ended. During the last election, KCR had promised one lakh jobs to the state’s youth. Telangana has the third-highest level of unemployment among graduates in India. During the movement, TRS had claimed that about 2,000 people had died by suicide in the fight for Telangana. But once the separate state was formed, they only identified about 500 people as Telangana movement martyrs. The rest of the families neither got special benefits from the state government nor received recognition for their sacrifice.

The core base of the TRS, which is of the movement background, is disappointed. More so that a faction of the erstwhile movement flag-bearers and the TRS party supporters had to part ways, resulting in the formation of the TJS.

So, Telangana, which was expected to be an easy ride for KCR, is turning out to be tricky. Now it’s up to candidate selection by the grand alliance and whether they can turn this election into 119 mini contests. A cracker of an election is on the cards.