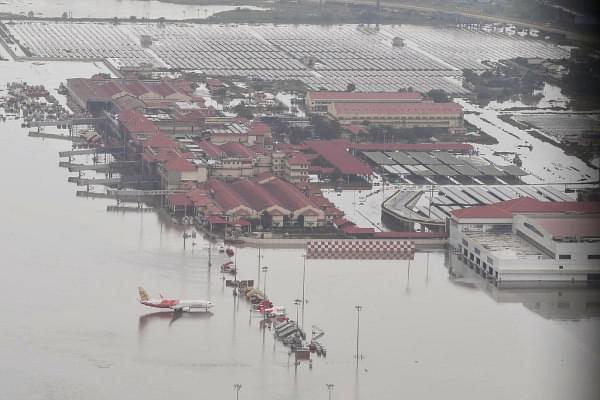 According to the India Meteorological Department, Kerala has received 2091.1 mm of rainfall against the long-period average of 1606.7 mm. (PIB India/Twitter)

Over 325 people have lost their lives in Kerala, with 106 dying on a single day on Thursday (16 August). Some 2.5 lakh people have been displaced and are currently homeless, held up across nearly 2,100 relief camps. At least 20,000 houses have been partially or fully affected and over 10,000 km of roads are damaged. It is a natural calamity or an order that Kerala has not seen in nearly a century. Initial damages have been pegged at over Rs 8,000 crore, but it is likely that it could top Rs 10,000 crore.

Prime Minister Narendra Modi took off from Kochi to see the flood-hit areas and announced ex-gratia payment from the Prime Minister’s relief fund even as the intensity of the rain has declined. Experts and officials are pouring over records to see what sort of damage was caused in 1924 – the last time Kerala witnessed floods of this nature. Some in the social media have begun to recall stories about the 1924 floods that were told to them by their grandparents.

Back then, Kerala received 3,368 mm of rainfall, leading to floods in the Periyar River after the Mullaperiyar dam gave way. A hill called Karinthiri Malai was washed off then, while over 1,000 were reported to have lost their lives.

This time, according to the India Meteorological Department, Kerala has received 2091.1 mm of rainfall against the long-period average of 1606.7 mm. But that doesn’t tell the entire story.

The widespread downpour has resulted in at least 10 of the 14 districts in Kerala being flooded. Until 16 August, 80 dams, both small and major ones, in Kerala were opened, with the Idukki dam being opened last week for the first time in 26 years. Water released from the dams combined with heavy rains in Karnataka’s Kodagu district have resulted in the Cauvery being flooded and threatening districts like Erode, Salem, and Karur in Tamil Nadu.

The south-west monsoon, which began on 1 June, has at least another five weeks to go before it can officially come to a close. This could mean more rains are likely to pound Kerala. Be that as it may, why is Kerala facing such an unprecedented crisis, one that is leading to demands for calling this a national disaster? The fact is, more than the floods, landslides are what have wreaked havoc and caused loss of lives.

Kerala’s coast is prone to erosion. In order to prevent it, people have been dumping boulders there for long. These boulders have been quarried from hilly areas, which have now turned vulnerable. The quarrying has been carried out with heavy equipment and explosives. Though quarrying is being reportedly done lawfully, some of the miners are taking advantage of the legal loopholes. A report in 2011 said that of the 18,000 mines in operation, only 8,000 are licensed. An amendment was made to the Kerala Minor Mineral Concession Rules in 2015 that made it mandatory for a village officer to certify if a land on which quarrying has to be done has been assigned for any other purpose. But there has been no drastic improvement in the situation and things have been especially bad in places like Idukki.

This is just one side of the picture, however. The other reason, according to Madhav Gadgil, who headed the Western Ghats Ecology Expert Panel, Kerala’s problem arising from the current flood situation is man-made. Gadgil, who had suggested creating three zones across 140,000 sq km in the Western Ghats, as per the environmental protection they needed, told media on 17 August that most of the affected regions had been deemed ecologically sensitive by the panel headed by him. Pointing out that the panel had in its 2011 report recommended curbs on mining and quarrying and use of land for non-forest purposes, he said it had also recommended against the construction of high-rise buildings – all of which have been ignored.

In fact, the Kerala government rejected the report, coming under pressure mainly from Christian organisations, as most of the farmers who would be affected by the recommendations were Christian farmers in high ranges like Wayanad. Not a single recommendation of the Gadgil panel was implemented.

Gadgil, in his interaction with the media, criticised the irresponsible environmental policy for the recent floods and landslides in Kerala.

These factors apart, the rising number of multi-storey buildings in quake-prone areas, illegal acquisition of forest lands near reservoirs and buildings in areas overlooking rivers and seas have compounded the situation.

While the centre and state along with the army and para-military forces are stretching every sinew to control the situation, Kerala is looking for more relief.

A three-pronged strategy is now being suggested to avoid a repeat of such things in the future. One, study the reasons for this phenomenon and ensure timely release of water rather than wait till the last minute. Two, governments should not be flexible in implementing environmental laws. Three, the Gadgil panel recommendations should be accepted, and various measures suggested by it should be implemented.