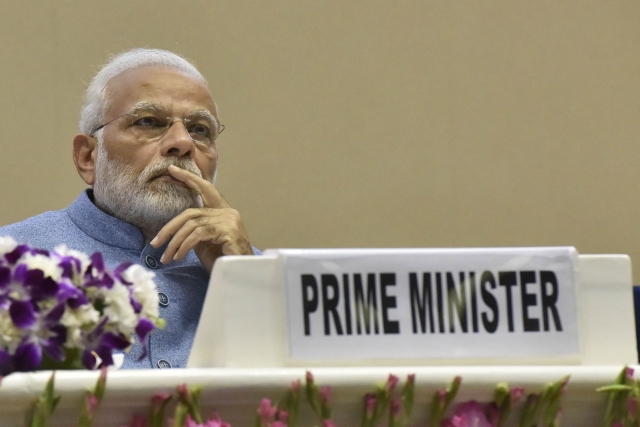 Read part one of this essay - The Sabarimala conundrum: it’s a lose-lose for Hindus.

It is possible that both the courts and the Kerala government may be demonising and humiliating Hindus as a way of taking pot-shots at the Bharatiya Janata Party (BJP) government, which they view as Hindu-friendly. What is bitterly ironic is that the BJP government has done absolutely nothing to save the Hindus of Kerala, but stood by, apparently either helpless or uncaring, nishprabha.

There were several things that the central government could have done. First and foremost, there is the history of Article 356, which was first used in Kerala by Jawaharlal Nehru against the then-communist government of E M S Namboodiripad in 1959. President’s rule was imposed based on a “breakdown in law and order”, which was probably no worse than what is being unleashed now unleashed on pilgrims by the current communist government under Pinarayi Vijayan.

I read in a tweet from @trramesh, a lawyer, that even 356 was not necessary: the center could use Article 356 (a)(1) to just take over the Travancore Devaswom Board and Pathanamthitta district where the shrine lies, and administer it directly to prevent further chaos and problems. I don't know if this is feasible, to have a federally administered enclave in a state, but it could be explored.

In fact, it is incumbent on the Centre to act in such manner, because the issue goes beyond state boundaries: it is not a Kerala issue, and thus, by definition, it becomes a Central issue, because the affected pilgrims are from all over the south. Thus the state governments of Tamil Nadu, Andhra Pradesh, Telangana, and Karnataka (and Maharashtra, and Delhi, and so on) are all parties to the matter because their residents' fundamental right to religious freedom, guaranteed in the Constitution, is affected.

Secondly, the Centre could have brought out an ordinance, or executive order, as they did in the jallikattu case, which would have stayed the court order at least till the time came to vote on it in Parliament. That probably would have taken care of this year’s pilgrim season without any ill effect. I am not sure if there are any legal obstacles to this as it is a constitutional issue, but then, I assume, so was the jallikattu case.

Thirdly, it could have just spoken out. There was stunning silence from the Centre. This betrays either incomprehension about what’s going on in Sabarimala, or cynical calculation, or both. The Home Minister, and especially the Prime Minister, did not say a word about Sabarimala. Amit Shah, the president of the BJP, did make strong statements, but he is a politician, not the inspirational leader that Narendra Modi is, and so his statements – which were also not backed up by any visible action – did not have the same impact.

I heard Arun Jaitley speak about the issue, but he did it in a very general, vague, ‘lawyerly’ way without mentioning the name ‘Sabarimala’ even once. I heard Yogi Adityanath speak, but what he said was the following: “if the Supreme Court could make a quick decision about Sabarimala, why was it dithering on Ayodhya?” These were not the most satisfying responses, and it’s clear that the Vijayan government is not particularly bothered about them.

This brings us back to the other possibility: of a long game being played. It is clear that there is a demographic wall against the BJP in Kerala. I have long explained this by what I see on the ground: Kerala is (approximately) 30 per cent Muslim, 30 per cent Christian (including those who have converted but retain their Hindu names for various reasons), 30 per cent Communists and only 10 per cent actual Hindus.

My conjecture was more or less proved in the 2016 assembly elections in Kerala. The BJP, under Kummanam Rajasekharan, a soft-spoken veteran, ran a very good campaign based on Hindu unity. They made unity the centrepiece of the campaign, invoking Sri Narayana Guru (Ezhava), Chattampki Swamikal (Nair), and Mahatma Ayyankali (SC/ST), representing the three biggest groups of Hindus.

And Hindus responded. In alliance with the BDJS, an Ezhava party, the BJP won 15 per cent of the vote. I could argue that, in effect, every Hindu in Kerala voted for the BJP + BDJS. (Remember, there are large numbers of people with Hindu names who are Christian or communist, and they don't count). In other words, the Hindus of Kerala delivered what they could for the BJP.

There may be a feeling among some BJP people that Kerala voted against them, so that they did not win any Parliament seats, and only one assembly seat. (This is a specious argument anyway, because the PM is responsible for the welfare of even people who didn't vote for him). But the fact is that the minority Hindus are powerless: on their own, they can never give the BJP victory. On the other hand, the Congress, with its vote-banks of Christians and in many cases Muslims, pretty much are assured of victory. At best the minority Hindus can only act as spoilers.

The only feasible way around this is to 'convert' some of the communists bearing Hindu names back to Hinduism. The backbone of the communists is the Ezhava community, an OBC (other backward class) group. In conversations with Ezhavas, I have come to the conclusion that many are committed communists, brainwashed with a victimhood narrative, wherein their poverty is attributed to FC (forward Caste) malice, along with manufactured 'atrocity literature' (an excellent example is the story of nineteenth century Nangeli who ripped off her breast in protest against a 'breast tax'. This story was fabricated by a hardcore bigot around 2010, but it is now widely circulated and believed).

What is ironic is that while it is true there were many atrocities against Ezhavas by Nairs and Namboodiris before 1947, those two groups are themselves powerless now, and it is increasingly non-Hindus who are putting Ezhavas down. Furthermore, the communists themselves have exploited them. After the first communist government in 1957, it took an astonishing 50 years for an Ezhava to become communist Chief Minister. Communists are infamous for casteism.

I think this is far-fetched. The brainwashing is so deep and so thorough that many communists see nothing wrong with the destruction of the shrine. They echo what C Kesavan (himself an Ezhava) said about the setting on fire of Sabarimala - a reduction in superstition. There is no way that hard-core communists are going to abandon the party. Ironically, in a strange way, their triumphalist notions about the superiority of the 'rational, logical' communists may have been more damaged if their government were overthrown and President's rule imposed.

On the other hand, the Congress has managed its dog-whistle signalling quite well. They made a faux pas earlier this year when their cadres publicly slaughtered a cow, with the intent of opposing anti-beef sentiment, and pandering to their non-Hindu votebanks. But they realised that this might boomerang on them, so they were very careful to make soothing noises in the Sabarimala case: they trod a fine line, vaguely supporting the pilgrims, and at the same time being careful to mouth platitudes about women's rights.

In other words, nothing to upset their votebanks, but faint praise for the pilgrims, just in case they could gain a few Hindu votes from their arch-foes the communists. The stunning silence of Shashi Tharoor, their loquacious MP from Trivandrum, was an example of this: for the longest time, Tharoor said nothing about it, leading me to wonder if I had finally discovered the one word not in his vast vocabulary.

In other words, the obituary of the communists in Kerala has been written too soon. If the BJP in effect sacrificed Sabarimala expecting that it would be the tipping point against the communists, it is a gross miscalculation. I think the BJP brass is getting terrible advice regarding Kerala. For instance, the only Minister of State at the Center from Kerala is K J Alphons, a Christian. I would be astonished if the BJP were to get more than about 100 Christian votes: anecdotal evidence suggests that Christians (rightly) view the Congress as their party. A far more productive exercise might have been to give an Ezhava that lone ministry as a signal.

Thus the BJP has comprehensively mismanaged the Sabarimala issue. They have sacrificed the biggest bulwark of Hinduism in the south against conversion (why do you think 40 million pilgrims come there braving all the inconvenience?) in a vain attempt to win a political battle against the communists.

Sabarimala shows Hindus yet again that they have no future in the 'Idea of India' as defined today. That is the root cause: endemic hostility and discrimination against Hindus, which turns them into second-class citizens in their own country. I wrote about this in 2002, and I reproduce it below; alas, things have only gotten worse in the meantime. Hindus are oppressed:

This goes all the way to the Constitution. I am hard pressed to think of many other constitutions where there is explicit inequality built in based on religion. Usually constitutions proclaim equality before the law as a cardinal principle. There are, perhaps, some countries where the dominant religion gets special privileges. But surely India is the only country where the numerically dominant religion is explicitly given fewer privileges, as in Articles 25 to 30, embellished by the provisions of the Right to Education Act, and its related constitutional amendment which cemented the inequality.

This is the root cause behind the troubles in Sabarimala. Can you imagine, by the wildest stretch of your imagination, a similar battle scene in a site holy to Christians in one of their countries? Say at St Paul's Cathedral in Britain? Of course not. Sabarimala is the symptom. The disease is endemic anti-Hinduism built into the Constitution, and used by the courts and bureaucracy for its own sake.