Gujarat, 1975 — The Assembly Elections That Triggered The Emergency 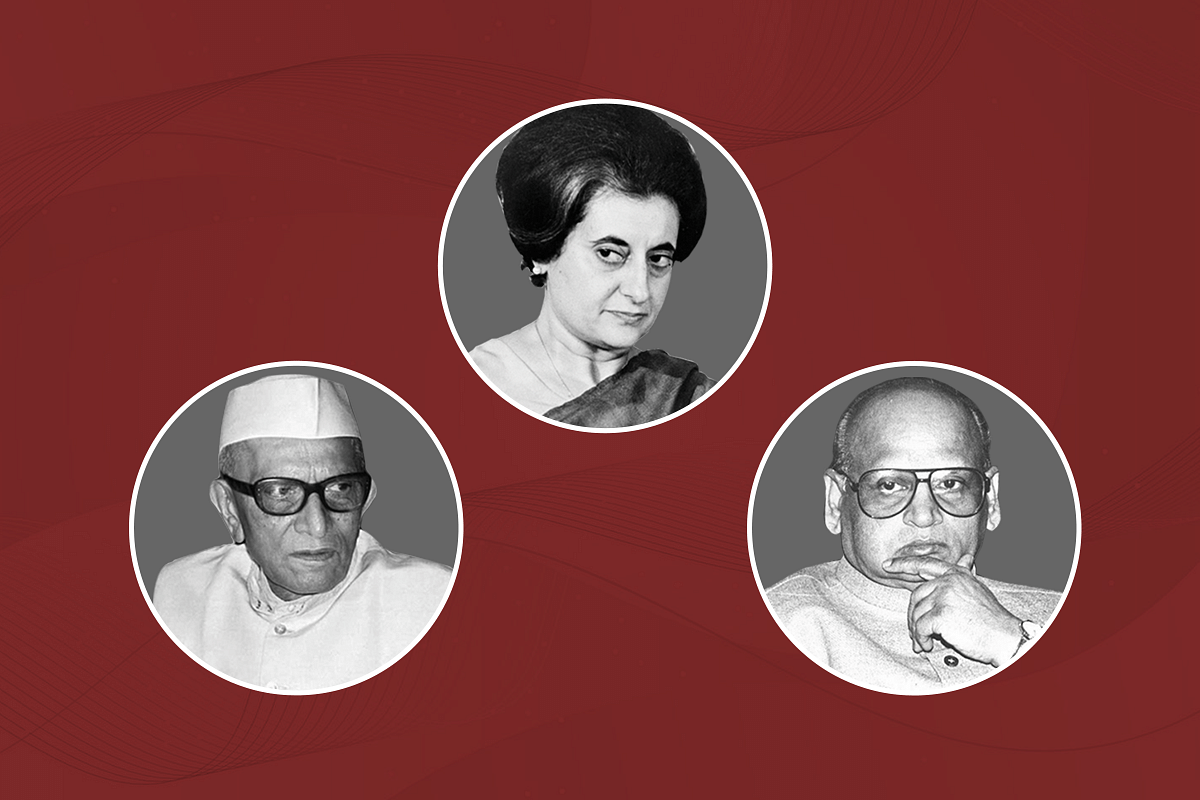 The BJP would do well to remember the results of 1975.

The standard reason for the proclamation of a national emergency by Indira Gandhi, in June 1975, is her unseating from Parliament by a judgement of the Allahabad High Court for misusing government machinery in elections.

The chronology is brief and straightforward: the judgement was issued by Justice Sinha on 12 June 1975. Indira Gandhi appealed to the Supreme Court immediately. On 24 June, Justice V R Krishna Iyer upheld the High Court’s order. And late at night, on 25 June, President Fakhruddin Ali Ahmed tamely, and shamefully, signed the emergency proclamation.

However, what we tend to forget is that it was not one, but two factors, which compelled Indira Gandhi to take this absurdly rash step.

The key, second factor was the assembly elections of Gujarat in mid-June 1975, in which the Congress lost half the seats it had and a majority in the state legislature to a loosely united opposition consisting of a powerful rebel Congress (the NCO, formally called the ‘Indian National Congress [Organisation]’) and the Bharatiya Jana Sangh (BJS), the precursor of the Bharatiya Janata Party (BJP).

This was a nightmare for the prime minister since she had thought that the general elections of 1971, the Bangladesh War, and a swathe of provincial elections thereafter had stamped out the NCO’s rebellion once and for all and re-established Congress predominance pan-nationally once again.

Indeed, she had already thwarted the Congress old guard’s revolt in the 1972 Gujarat elections (or so she thought then), in which the Congress won 141 of 182 seats with 51 per cent of the popular vote. And yet, Babubhai Patel of the NCO was sworn in as chief minister on 15 June 1975 along with over a dozen cabinet ministers of the BJS.

To impartial observers of the time, the Gujarat assembly election results marked the welcome end of a sordid phase in state politics. But, to Indira Gandhi, they represented a grave political threat and only aggravated her already-considerable insecurities to neurotic levels.

In July 1973, sitting Congress chief minister Ghanshyam Oza was replaced by a new man, Chimanbhai Patel, barely a year after Oza had wrested a record victory. This was the beginning of the end because Chimanbhai’s ascendancy marked a visceral break from the sober Gandhians who had previously held that chair, like Jivraj Mehta, Balwantrai Mehta, Hitendra Desai, or Oza.

Chimanbhai was both ruthless and ambitious and openly resented Oza’s elevation in 1972. He felt that the top post should have been his. But, in spite of his successful conniving with the party leadership in Delhi, Chimanbhai suffered an accursed tenure as chief minister. Within a year, the state was nose-deep in student agitations. This was the Navnirman movement.

For all his ambitions, Chimanbhai proved himself to be utterly incapable of containing the situation and was forced to resign in barely a year, following which the state was placed under President’s rule. In a fit, and a fix, he broke with the Congress to float his own political outfit.

By this time, taking a lead from the undeniable success of the Navnirman movement in Gujarat, a swathe of protests sprang up across the rest of the country. It was in 1974 that George Fernandes led the famous railway strike. In Bihar, once a solid Congress bastion, which the party had only just wrested back in 1972, Jayaprakash Narayan started his Sarvodaya movement. He encouraged similar movements in other states against unemployment, inflation, corruption, and oppression.

Their target was the Congress party in general and Indira Gandhi in particular.

As 1974 gave way to a fateful 1975, the agitations only mounted. It is in this backdrop that the June 1975 assembly elections took place in Gujarat (which itself came about only after NCO national leader, Morarji Desai, sat on a fast unto death).

It was not a level-playing field since the Congress was still very much the party to beat — much like the BJP is today. The NCO, under Babubhai Patel, had been cut to size in the 1972 elections, and the BJS was still a fringe player. These are the 1972 results:

Morarji Desai understood that they needed a robust coalition since there was no way his party could take on the Congress alone, but there were issues. He was chary of aligning with the Jana Sangh, and Babubhai Patel was firmly against tying up with Chimanbhai’s Kisan Mazdoor Lok Paksha (KLP). There was simply too much distrust and bad blood between the two Patels.

That left the Jana Sangh. Here, senior members of Jayaprakash Narayan’s Sarvodaya movement met Morarji Desai and prevailed upon him to accept the BJS into the NCO coalition. Morarji bhai eventually agreed, but he kept Chimanbhai’s KLP out despite the Sarvodaya leaders’ entreaties. The coalition was called the Janata Morcha, and it was decided that the constituent parties would contest the elections with their own symbols.

The Morcha included Charan Singh’s Bharatiya Lok Dal (BLD) and Raj Narain’s Socialist Party, both primarily based in Uttar Pradesh. While these were minor players in Gujarat, the association of the BLD and Narain, who was instrumental in pushing the election malpractice case against Indira Gandhi, gave the coalition a grand, national feel.

In fact, this was the first time that so many opposition parties, from so many states, came together electorally to take on the Congress.

In that sense, the Janata Morcha of 1975 in Gujarat was a formal precursor to the Janata Party that was formed after the Emergency was lifted in 1977, and is thus a turning point in Indian political history.

And for the record, Narain’s Socialist Party won a seat, Una, and the BLD won two, Jamnagar and Halol. So, they weren’t mere also-rans, but active participants who dutifully pulled their weight.

An unnerved Indira Gandhi decided to embark upon a 10-day campaign in Gujarat, while the Janata Morcha commenced the arduous task of seat selection. It was clear to the NCO that votes had to shift without splitting from the Congress to a united opposition. Only then would the votes of the Jana Sangh and numerous independents act as a force-multiplier.

Another point in their favour was the 1972 delimitation, which had redrawn constituency boundaries and increased the house strength from 168 to 182, so the 1975 elections were a reset of sorts for more than one reason.

In the end, the voters of Gujarat reduced the Congress to a minority in spite of Indira Gandhi’s blistering campaign. Here are the results:

As this (rare) map above shows, while the Congress lost badly across the state, the Janata Morcha didn’t do well enough to secure a simple majority. The NCO got only 56 seats and the BJS, 18 — a total of 74, which was still 17 short of the halfway mark.

So, Chimanbhai Patel had the last laugh, as Babubhai Patel was forced to set aside their animosities to invite his nemesis into the coalition to make up the numbers.

Babubhai was sworn in as chief minister of Gujarat on 15 June 1975, three days after the Allahabad High Court disqualified Indira Gandhi from the Lok Sabha. Also sworn in were 13 members of the Jana Sangh — a remarkable percentage considering they got only 18 seats, and a reflection of just how decisive their contribution had been to the overall effort.

Of course, the eternal irony is that if the NCO had accommodated Chimanbhai’s KLP into the Janata Morcha, the Congress would have gotten less than a dozen seats, but it was not to be. As a result, Chimanbahi had to bide his time and wait till 1990 before he became chief minister again (if only to die in office, in 1994, hounded by the BJP’s accusations of rank minority appeasement, and under a cloud of scandal).

In the rest of the country, the 1975 assembly results were just the fillip the opposition had been waiting for. Energised, they increased their political attacks on Indira Gandhi and derided her endlessly over the paltry fruits of her campaign labours in Gujarat. The prime minister was fallible and Gujarat had proved it.

If disqualification by court order was the ultimate humiliation, the Gujarat assembly results were the ultimate indicator that things were out of Indira Gandhi’s control. The Congress could be beaten. It is no wonder, then, that she threw caution to the winds, declared an emergency within 10 days of Babubhai Patel’s swearing-in, and jailed her political opponents.

But the template of opposition unity was set. It would hold these leaders in good stead after they were released from prison in 1976-77, to finally band and break the myth of the Congress monolith and show Indira Gandhi her place — by the vote.

That rarely remembered assembly election of 1975 in Gujarat also marked the advent of the Jana Sangh as a force in Indian politics, since it proved that true opposition unity could be achieved only in alliance with the Sangh. Without them, the rest would always fall short of the mark, leaving the electoral advantage to the Congress.

Forty-seven years later, Gujarat goes to the polls again in December this year. The BJP would do well to remember the results of 1975, as it represents their emergence as a real, permanent force in Gujarat politics for the first time, the invaluable contribution of their loyal karyakartas in the state, from then to now, and the hubris that that generation fought against. To forget that would be a great disservice to those who came before, and those they serve today.