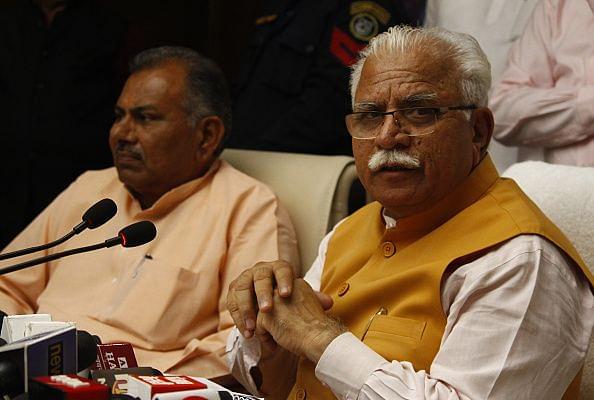 The noble state of Haryana goes to the polls in a few months. It is the land of Phulkari embroidery, of Kapil Dev and nooni butter; of the green revolution and the futurescapes of Gurgaon; of Aaya-Rams and Gaya-Rams, of fabulously-entrenched dynastic politics, and it is changing – dramatically. For, in the recently-concluded general elections, the state returned the Bharatiya Janata Party (BJP) in all its 10 parliamentary seats, with a remarkably-decisive mandate. It makes for quite a story:

But things were not always so lopsided. Five years ago, Haryana’s political landscape was neatly carved between three families, who rallied their electoral victories mainly around a Jat-centric caste-combination. The most successful of late was Bhupinder Hooda, of the Indian National Congress (INC), who served two full terms from 2005-2014 as Chief Minister. He rarely faltered in taking credit for how Gurgaon transformed into an enviable twenty-first century dream, with plush corporate towers, green vistas, and metro lines and all.

Champing at the bit was the Chautala family’s Indian National Lok Dal (INLD), which viewed the CM’s gaddi as its birthright. And why not, when the party’s senior, Om Prakash Chautala, had been sworn in as CM thrice before, and their pater familias, the late, venerable Devi Lal, twice broke the Congress’ stranglehold over Haryana’s electorate? But by 2014, both Chautala Sr. and his son were in jail, serving sentences for a scam, and Devi Lal’s victories in 1977 and 1987, a distant memory.

A third family was that of the late, former CM Bhajan Lal, once of the Janata Party, then brazenly by defection, of the Congress, and finally a splinter group of his own (largely for the political advancement of his son Kuldeep Bishnoi). But with Lal’s passing away in 2011, the son Bishnoi found himself between a Chautala rock and a hard Hooda place, for which in the 2014 general elections, he and his HJCBL allied with the BJP. That alliance didn’t last too long, not even till the Assembly elections of later that year. By 2016, Bishnoi was back in the Congress fold.

There was a fourth, of Bansi Lal, who had been a Congress CM of Haryana twice, and once on his own rebellious steam, between the 1960s and the 1990s. But with his passing away in 2006, his blossoms withered on a once-stately bough. Since then, they have had to be content with stunted, sporadic electoral success now and then – though not as a primal force.

That is when a fifth family rose, dynastic by civilisation only, and swathed in saffron – the Sangh Parivar. Until 2014, the BJP had waged many a Kurukshetra, at Kurukshetra, and many a Panipat, at Panipat, but all largely unsuccessfully. Then, with a dash of Modi magic, they turned the tables on the others. In May 2014, the BJP won seven of 10 seats, and raised their vote share from 9 per cent in the 2009 Assembly elections, to 41 per cent in May 2014:

Building upon their successes in the May 2014 general elections, the BJP carried their tide into the Haryana Assembly elections held later that year. While their vote share dipped by 8 per cent from the Modi wave of May, it was enough to give them 47 seats in a house of 90, because of a distinct three-way vote-split. Kuldeep Bishnoi and his HJCBL might never have left!

Even though the INLD and the Congress managed to hold their own in the Sirsa-Hisar-Rohtak belt, it was a stunning surge by the BJP, which has only grown since then. To the extent that in May 2019, the INLD was comprehensively decimated in every single parliamentary constituency. Their vote share dropped by 22 per cent from 24 to 2 (yes, you read that right!), while the BJP raised its vote share to 58 per cent this May.

The true extent of the INLD’s decline is made starkly apparent in the following maps:

In contrast, the Congress held its own, by and large in pockets, even if it came a poor second in most seats. The exception is its traditional stronghold of Rohtak, where Deepinder Hooda came a close second, polling 46 per cent of the votes. In Sonipat too, the Congress polled an apparently decent 37 per cent, but the fact that this was one of the regions where the Congress did exceptionally well in the 2014 Assembly elections, will be a cause of worry for them:

The real story though, is the second, heavier surge of the BJP in 2019. It is not just that they won all 10 seats on offer in Haryana, but that they did so in thumping style. In Faridabad and Karnal, they polled 70 per cent of the popular vote. In Bhiwani-Mahendragarh, they polled 63 per cent. Indeed, their lowest vote share was in the old Congress stronghold of Rohtak, where they polled ‘only’ 47 per cent - and even that seat they won. In Sirsa, where the BJP had traditionally fared poorly, they gained a whopping 33 per cent – all from the INLD.

Calculating apples to apples at the state level, that means a vote swing of plus 17 per cent for the BJP, between the two general elections, or, more ominously for other political parties, a positive swing of 25 per cent for the BJP, from the 2014 Assembly elections. Either way, one of the most important aspects is the stupendous 33 per cent vote jump in Sirsa Lok Sabha constituency, where the BJP had fared rather poorly in the 2014 Assembly elections. This appears to be a new pattern, reflecting the mass swing of the Jat vote towards the BJP in 2019:

Bringing these disparate fortunes together, we get the following vote share table:

It may seem from the above table that there was no decline between the 2014 and 2019 general elections in the ‘Others’ category, but that is because Dushyant Chautala stood as a breakaway INLD semi-independent candidate from Hisar, on a JJP ticket, and commendably garnered over two lakh votes. This compensated for the HJCBL votes going to the Congress post their 2016 merger, and the erosion of the BSP, amongst others smaller forces.

The implications of these dramatic shifts are multiple:

• The INLD has been decimated. Its future recovery appears a low probability.

• The BJP has now become the natural party of governance in Haryana.

• At long last, the BJP has managed to seize the bulk Jat vote, which had hitherto remained primarily divided between the INLD and the Congress.

• There is a clear shift from the INLD largely to the BJP, and from the ‘Others’ to the BJP and the Congress.

• The Bahujan Samaj Party’s vote share has consistently declined with time, with, in highest probability, its supporters shifting loyalty to the BJP.

• The ‘others’ vote has declined in visible, significant, and linear fashion over time in the past decade.

• The decline of the ‘Others’ vote, along with the decimation of the INLD, means that it becomes an increasingly two-way contest between the Congress and the BJP in a larger number of seats.

• The forthcoming Assembly elections will, therefore, be a straight contest between the BJP and the Congress for all practical purposes.

• Independents and rebels (often the same thing), who had been the ‘bane’ of Haryana, are thus expected to act less as ‘vote-cutters’ in the forthcoming Assembly elections.

With these analyses in mind, let us now finally gaze into the crystal ball and make a first, detailed, seat-wise forecast for Haryana. The methodology is simple: take the combined Congress-INLD vote share of the 2014 Assembly elections, and plot it against the BJP’s vote share. Next, calculate the percentage differential. And finally, apply a swing factor in favour of the BJP, again, seat-by-seat, and see what results we get.

In the current scenario, a projected swing of plus 20 per cent is given to the BJP (a sort-of halfway mark between the 17 per cent gain from 2014 to 2019 general elections, and the 25 per cent gain between the 2014 Assembly elections and the 2019 general elections). Taking a BJP victory tolerance of negative 5 per cent (because not all the INLD votes will shift in entirety to the Congress or the BJP, and, because it will still be a three-way contest in some seats), we get the following result:

In numerical terms, we get for a Haryana house strength of 90:

Conclusion: Highest probability is of BJP being returned for a second five-year term.

These analyses and forecasts will undergo modifications once the Election Commission releases the official, detailed 2019 elections results at the Assembly segment level. Following that, actual Assembly seat vote share mapping will be done, to refine forecasts, thereby making them more representative. These will be further bolstered by pre-poll surveys. But until then, enjoy this first prediction for a fascinating state, while you sip a long, cool lassi, and watch re-runs of Kapil Dev bowling his magical outswingers, and knocking the career out of Eddie Hemmings, with tall, tall, sixers.