Heavy Traffic Fines: Why The Government Should Reconsider This Ill-Conceived Move 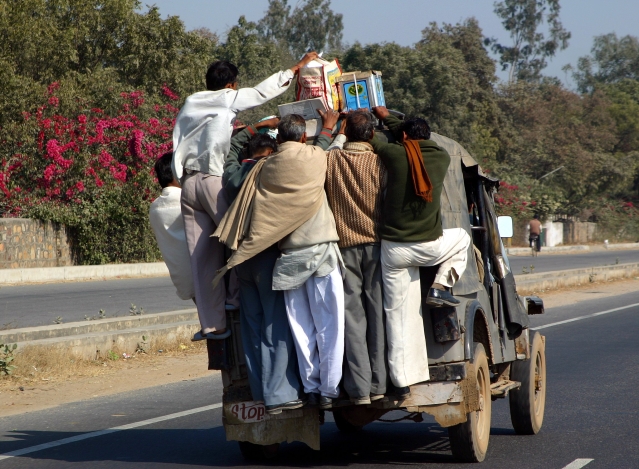 For far too long, violating the rule of law or at least not taking it seriously has been the norm rather than an exception in India. Not wearing a helmet, driving carelessly thus putting life of other commuters at grave risk, driving without licence, registration certificate, pollution certificate, etc is rampant and drivers break the established rules with impunity.

To put a premium on this pervasive lack of civic sense and end the entrenched 'chalta hai' attitude, the government finally decided to increase the fines for traffic rules violations manifold.

However, this idea that the state, and a weak one at that, can deter offenders by ratcheting up the monetary penalties is fraught with fallacies.

Many a times we have taken this page straight from the weak states playbook in hope of enforcing the rule of law better only to fail every single time.

The problem with weak states like India is the lack of capacity which translates into its inability to implement the existing rules efficiently. But rather than understanding the root of the problem, we try to compensate our incompetence by raising the quantum of punishment. Then, a few years down the line, we wonder why our problems have only exacerbated instead of getting resolved as we had hoped.

We don't have to look much back in history. What transpired in the aftermath of horrific Nirbhaya rape incident should be a case study in how not to expend our energies only on increasing the quantum of penalty. It's time we rid ourselves of this mindset of relying excessively on passing laws to solve our problems.

Of course, comparing that with hefty fines for traffic violations is like comparing apples and oranges. My intention is only to highlight the need to change the underlying mindset.

The latest fines mandated by the government are irrational. They are now same or higher compared to the fines in many developed countries whose per capita income is many times higher than India.

Imposing penalties on a driver which are worth more than the cost of the vehicle itself is not just a deterrent. It's devastating. Punishment has to be proportional to the crime committed especially if its not a criminal offence (most of traffic violations are not).

Whether the high fines will deter is also highly doubtful. Without any corresponding rise in traffic police, patrolling or surveillance, the probability of getting caught remains the same. In fact, such steep increase in fines may even be counter-productive.

Rune Elvik is a road safety researcher at the Institute of Transport Economics, Oslo, Norway. In 2016, he conducted a meta analysis of nine studies related to relationship between increasing penalties and changes in compliance.

'Increasing traffic fines was found to be associated with small changes in the rate of violations. The changes were non-linear. For increases up to about 100 per cent, violations were reduced. For larger increases, no reduction in violations was found," he concluded.

May be this is the Laffer curve for traffic fines - increment which achieves maximum deterrence.

In India's case, the lowest increment in fine is 100 per cent and go up to as high as 1900 per cent. More than the hefty fines, it is the sudden hike which is a bigger problem. It would've been much better had the government increased fines gradually every year. This would certainly have achieved better results and be more palatable.

Then there is the issue of arbitrariness. When you have instituted such heavy fines, the room for discretion on the part of the police should be eliminated. This is not the case.

Who decides if the driving standard is far below the ideal?

Of course the police.

Given that they are usually more interested in meeting their challan targets, this discretion may cause some innocent driver dear. Sure, he can contest it in court but one needn't point out that given a choice between going to the court and paying the fine, which one a common man would chose.

The overarching concern of the government behind this drastic move is improving road safety. More than 1.5 lakh people die every year in road accidents. India is a signatory to the Brasilia declaration and has resolved to reduce road accidents and traffic fatalities by 50 per cent by 2022.

Meeting this target is as unrealistic as doubling farmers' incomes by that year. If the government thinks, it can take a short-cut to achieve the goal by increasing fines 1,000 or 2,000 per cent, it's waiting to be disappointed. At best, it can hope that this move will help balloon the pockets of corrupt traffic policemen.

Many countries have achieved dramatic results in the past in reducing road fatalities: France through fully automated speed management system, countries such as Luxembourg, Belgium, Portugal by increased police checks (not just increased fines), Sweden and Netherlands by improving infrastructure (more roundabouts, separate lanes with stricter fencing and clear dividers, etc), Japan via improved traffic management system and so on.

Data shows that in the past two decades, the number of motor vehicles have increased by more than 150 per cent in the country while road length has gone up by less than 50 per cent.

Is it any wonder then that roads are so congested and it takes one hour to reach your destination when it should ideally take 30 minutes and some people try to cut corners and jump signals or drive rashly?

In the end, policymakers should pay heed to what Chanakya had to say on ill-awarded punishments.

“For punishment when awarded with due consideration, makes the people devoted to righteousness and to works productive of wealth and enjoyment; while punishment, when ill-awarded under the influence of greed and anger or owing to ignorance, excites fury even among hermits and ascetics dwelling in forests, not to speak of householders."