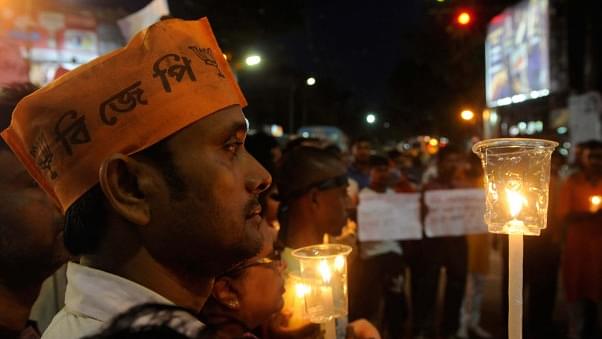 There was never any doubt that the just-concluded panchayat polls would be marked by violence (read this article). After all, polls in Bengal are anything but peaceful and rigging the poll process has been the norm in the state since the early 1970s. But the intensity of the violence and the brazenness with which the ruling Trinamool Congress has tried to browbeat the opposition was unprecedented and has left everyone shocked and outraged.

As Prime Minister Narendra Modi said on Wednesday (16 May), the Trinamool Congress flouted all established democratic norms at every step, right from filing nominations to voting and even counting of ballot papers. Never before in Bengal’s muddied poll history have elections been reduced to such a mockery as this time. But if the Trinamool Congress’ conduct has been shameful, that of the national media hasn’t been any better. The wilful subversion of the poll process by the Trinamool Congress found little or no mention in the national media, perhaps because the image of the party chief Mamata Banerjee, who has positioned herself as a virulent critic of the Bharatiya Janata Party (BJP), needs to be protected.

Here are a few instances of the Banerjee-led Trinamool Congress that the national media blacked out to protect her:

- Right from day one, the Trinamool Congress has leaned heavily on the State Election Commission (SEC) to announce a one-day poll schedule (the last panchayat polls in 2013 were spread over five days), which it did. The SEC looked the other way, as alleged by the BJP, Congress, and Communist Party of India (Marxist), when widespread intimidation of and attacks on opposition candidates were reported and they were prevented from filing nominations. When the SEC intervened, it was allegedly pressured by the Trinamool to reverse its stand (read this report), earning it a rebuke from the Calcutta High Court. In fact, never before has the SEC’s conduct come under judicial scrutiny as it has this time, and never before has a court passed an order stating that senior state and SEC officers would be held personally liable for loss of life and property in the polls. The unprecedented judicial intervention this time was the outcome of the brazen attempts to subvert the poll process by the Trinamool.

- This was the first time that such a large number of seats in the three-tier panchayat system have gone uncontested. The opposition could not file nominations to 34 per cent of the seats, and not because (as the Trinamool mocks) the opposition parties could not find any candidates to field. The violence unleashed on opposition candidates and their families has been well-documented in some sections of the local media to bear repetition here. That the Trinamool walkover in the 34 per cent seats reeked of foul play was attested to by the Supreme Court, which barred the declaration of results of these uncontested seats without its permission.

- The national media had no time, nor the inclination, to report the widespread violence against, including rape of, women family members of opposition candidates (watch this video clip). And when a section of the media reported it, there was deafening silence from the so-called liberals and women’s rights activists who would have definitely raised a stinker if the same would have occurred in a BJP-ruled state. There was no outrage against women being raped or assaulted in public – all because it was happening in a state ruled by a great ‘democrat’ who had positioned herself against the BJP.

- The one-day poll schedule was an invitation to rigging and violence, and everyone knew it. The SEC could not provide adequate forces, and the outcome was what was widely feared – a record number of 27 deaths (not counting some more that the SEC glibly said were not related to the polls, and the SEC’s claims have been challenged by opposition parties) and widespread rigging. Ballot boxes were taken away and dumped in ponds, ballot papers torn, opposition candidates beaten up and killed. Trinamool goons captured polling booths, drove away voters, and stamped ballot papers in full view of pliant poll officials and police. This widespread rigging and violence went largely unreported in the national media.

- The national media blacked out the shameless conduct of the state police, a highly politicised and spineless force which has an ignominious history of acting like an adjunct of the party in power in the state. Policemen posted at polling stations looked the other way when Trinamool goons indulged in hooliganism and violence, but even fled when the going got a little too tough. Sections of the Bengali media reported extensively on policemen beating a retreat when Trinamool goons hurled bombs and fired shots to drive away opposition supporters and capture booths.

- Never before in recent history has a poll official been brutally murdered for doing his duty. A school teacher, Rajkumar Roy, was on poll duty and had objected to attempts by Trinamool goons to snatch away ballot papers. He disappeared from the polling station and his mutilated body was found beside the railway tracks after a few hours. No outrage by the pseudo upholders of democracy anywhere in the country. Many other polling officials were openly intimidated and threatened, and sections of the local media did report such incidents, which were absent in the national media.