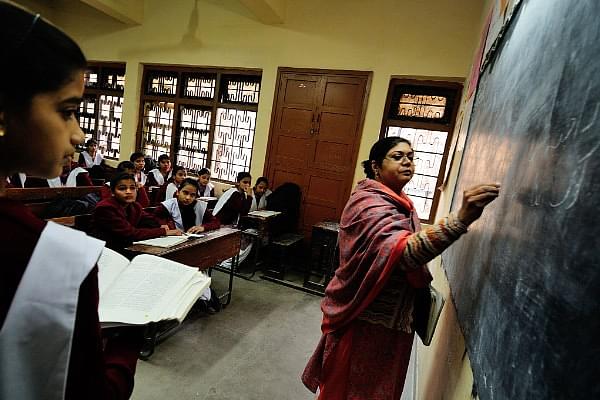 In this post, we look at how the policy of the Bharatiya Janata Party and its predecessor organisation – the Bharatiya Jana Sangh – has evolved over the years with respect to the administration and management of educational institutions. The stated positions of the party have been sourced from the publicly available policy documents and manifestos.

(Educational Autonomy – Universities and other educational institutions coming under even more influence of the Government has led to a deterioration of the situation. This practice is absolutely against the principles of Bharatiyata. The direction and control of education must be in the hands of educationists and through autonomous institutions and they should be able to perform their duty by being completely free from the control of the Government.)

(In order to maintain the autonomy of Universities and to keep them out of the unwarranted influence of local politics, provisions should be made such that only educationists and teachers are part of the management committees of Universities and other educational institutions.)

Even though the State must bear the expenditure on education, education must not be state-controlled. There should be autonomous bodies of teachers and educationists to run educational institutions. It is not proper to run them as a department of the State. The distinction between the State and private educational institutions must go… Education must inculcate unity and not disruption in the society. The existence of a separate system of public schools in India militates against this basic principle…

Note: It is interesting that the party mentions that a “separate system” of public schools is causing disruption in society.

Bharatiya Jana Sangh, Manifestos for the 1951 and 1954 Elections

In the field of education, the party will strive for the reorganization of the educational system on the basis of Bharatiya culture both in spirit and content so as to make it an effective national instrument for character and body-building.

Bharatiya Jana Sangh, Manifestos for the 1957 and 1958 Elections

Revolutionary Changes in the System of Education

Jana Sangh will make revolutionary changes in the present system of education. The aim of education is an integrated development of the individual and the promotion of moral and spiritual values of life so that education may become a powerful and effective means of the real progress of the nation and the individual. Education, like judiciary, will be free from interference of and control by the Government. Autonomy of educational institutions and Universities will be respected and protected.

The Congress Government has failed to realise the importance of education in national reconstruction. The present educational system, gifted to us by the Britishers, who had framed it for the achievement of their imperialistic designs, cannot fulfill the needs of a free nation. The Bharatiya Jana Sangh will evolve a new educational pattern which would blend our ancient Gurukul modes with modern methods with their technical, vocational and scientific bias.

The Indian Constitution has recognised one citizenship and given equal rights to all the people of India. Against the spirit of the Constitution and the principle of one nationhood, some people have been from time to time putting forward separatist demands claiming special privileges and protection on the basis of province, religion, caste of language. There are allegations also of discrimination. Bharatiya Jana Sangh will put an end to all separatist demand and discriminatory practices.

Bharatiya Jana Sangh will respect the autonomy of Universities and educational institutions and free them from the interference of Government. In each district, and education board will be constituted to supervise the affairs of the institutions within the district. The board will include representatives of teachers and donors.

Jana Sangh is pledged to the creation of an egalitarian society in which there would be no discrimination against, or in favour of, any citizen on grounds of birth, heredity, caste or creed.

Jana Sangh will reform the educational system so that it can service simultaneously to strengthen national values and fulfill the needs of modern India.

For Teachers and Taught

Ensure the autonomy of Universities and free them from governmental interference; A Board of Education will be set up in each district with which all the schools of the district will be affiliated, comprising of representatives of teachers, parents, managements and the government. This Board will supervise educational institutions and co-ordinate their working.

Ensure academic freedom and the autonomy of Universities.

Article 30 permits minorities to run their own schools. It will be rationalised and suitably amended to ensure justice & equality to all irrespective of religions.

(Note: This is the only time when the BJP has openly talked about Article 30.)

Ensure academic freedom and the autonomy of universities, raise the emoluments and status of teachers.

Ensure equality for all and discrimination against none on grounds of religion in matters of education by amending Article 30.

Ensure autonomy to universities, encourage them to mobilise resources for research and higher education, and provide academic freedom to our scholars, especially in the social sciences.

Our Commitment to Minorities: Towards Equal Opportunity and Prosperity

Amend Article 30 of the Constitution suitably to remove any scope of discrimination against any religious community in matters of education.

Ensure autonomy to universities and to colleges under them. Rid them of corruption and other baneful influences. Encourage them to mobilize resources for research and higher education and provide academic freedom to our scholars, especially in the social sciences.

Encourage greater participation of social and charitable institutions in expanding the network of educational institutions and in improving their standards.

(Note: An explicit promise in this manifesto for aiding social and charitable institutions in setting up educational institutions – along the lines of Dharmic Education Boards and its offshoot.)

Bharatiya Janata Party (part of the National Democratic Alliance), Manifesto for the 1999 Election

We shall strive to improve the quality of education at all levels — from primary schools to our universities.

(Note: This manifesto was that of the NDA, a coalition, rather than that of the BJP’s alone. The mention of autonomy and academic freedom is missing for the first time.)

We are committed to establishing a civilised, humane and just civil order; that which does not discriminate on ground — of caste, religion, class, colour, race or sex. We will truly and genuinely uphold and practise the concept of secularism consistent with the Indian tradition of ‘Sarva panth samadara’ (equal respect for all faiths) and on the basis of equality of all. We are committed to the economic, social and educational development of the minorities and will take effective steps in this regard.

Bharatiya Janata Party (part of the NDA), Manifesto for the 2004 Election

The entire school and college education system will be overhauled and made employment-oriented. Opportunities for skill development and vocational training will be maximized.

(Note: In almost all manifestos till now, the promise of the Bharatiya Jana Sangh/Bharatiya Janata Party was towards an education that empowers individuals and also teaches people about Bharatiya culture. In this manifesto, an explicit declaration to move towards employment orientation was made.)

The focus on Indian culture, heritage, and ethical values in syllabi will be strengthened. Character-building and all-round development of the student’s personality will be emphasized…

Ensure effective implementation of the Right to Education, Right to Food Security Act.

(Note: The Bharatiya Janata Party promised to implement Right to Education effectively, which is what we are noticing since 2014.)

...will provide autonomy with steps to ensure accountability for institutions of higher learning.

The credibility of the regulatory bodies shall be restored. The procedures to make appointments to senior positions shall be made transparent and merit and ability shall be the sole criterion. UGC will be restructured and it will be transformed into a Higher Education Commission rather than just being a grant distribution agency.

(Note: One can notice a clear departure from the earlier position on this issue. There is no talk of ‘freeing’ institutions from regulatory bodies. On the other hand, the promise is to strengthen these bodies, which, in effect, reduces the autonomy of institutions!)

BJP will set up a National Commission on Education to report in two years on the state of education and the reforms needed. Based on the report, BJP will implement a National Education Policy…

(Note: This promise – of getting a National Education Policy ready in two years – has not been kept.)

The promises made by the Bharatiya Jana Sangh and the Bharatiya Janata Party over the past several decades has clearly ‘evolved’ and appears to be more in line now with that of the Congress’ socialist approach.

It will be interesting to see if the party makes any promises on the education front in its 2019 manifesto, and, if it does so, whether the same will attempt a change in its current outlook and move towards the promises of its founder!

This piece was published originally on the writer’s blog and has been republished here with permission.