How Smriti Irani Can Be The Face Of, And Primary Force Behind Women-Centric Policies Of Modi Sarkar 2.0 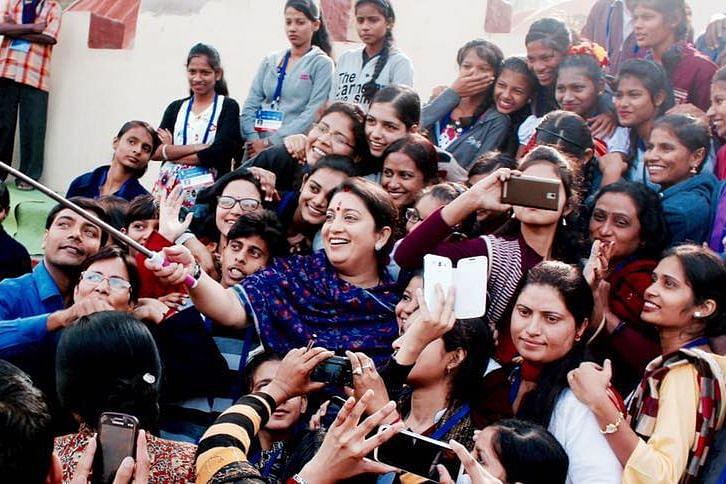 Recently, the Ministry of Food Processing Industries (MoFPI) headed by Harsimrat Kaur Badal and Ministry of Women and Child Development (MoWCD) headed by Smriti Irani entered into an agreement to establish the National Organic Festival of Women Entrepreneurs.

A memorandum of understanding was signed. The initiative will work around encouraging women entrepreneurs and farmers.

The first edition of this will be held at National Institute of Food Technology Entrepreneurship and Management (NIFTEM) in Sonipat, Haryana.

The venue for this collaboration is an educational institution - which is helping youth in pursuing specialisation in the food domain.

As MPs and ministers, Badal and Irani have their ear to the ground. Their political temperament leans towards intensity. They have the grit required to melt ministerial walls and in putting ideas and partnerships to ground.

Irani, who holds the textile and women and child development ministries in the centre, has spoken earlier about convergence of strengths.

Heading MoWCD and the Ministry of Textiles, Irani is now placed at a powerful cusp of many facets of womanhood: women hand workers, women entrepreneurs, women artisans.

Her partnership with Badal, even though humble for a beginning, is exciting.

In terms of reach, impact, and improving the lives of women in a plethora of aspects and measures, Irani, particularly and certainly, is that nodal point person, who can quietly weave the intricate story of gender-based success and women's security for India and for Modi raj.

One: Skilling the Unskilled

By building natural partners among ministries and departments. In making them think aloud new ideas for the second largest employment generating sector. The sector is covered under Irani's ministry of textiles.

Convergence between other ministries and the two ministries headed by her will widen the doors to skilling the unskilled - the need of the textile and handicraft sector.

Two: Give a reason to trust the system

The Unnao rape victim passed away after a 40 hour battle with life.

The cases of rape that have emerged surrounding the brutal rape and burning of Preeti Reddy in Hyderabad, have hollowed people's patience and stirred their emotional response.

Unnao and Hyderabad cases have disrupted the decorum (read patience) with which people read and watched the judicial "due process".

This convergence between MoWCD and other ministries should thus be aimed at making the system and the due process of law worthy of women’s trust again.

Likewise, the MoWCD's intervention is as needed in looking at the massive wrongs that mark popular narrative and social media narrative on gender related crimes.

For instance, the movie trailer mentioned in this report, needed an intervention and a resounding rap from the ministry.

"The five-minute video opens with a disturbing scene of a wrestler misbehaving with - molesting, actually - a schoolgirl, and the internet is furious to say the least," the report points out.

A convergence with the Information and Broadcasting ministry would help in initiating the course correction in the narrative surrounding women and the girl child.

On 3 December, the Bharatiya Poshan Anthem was launched.

"Desh ummeed se hai," the song begins on this line.

The nation is pregnant with hope - is how it would be roughly translated. The anthem aims at raising the pitch for making India malnutrition-free by 2022.

Her ministry looks at the Poshan Abhiyan as a national movement. As per her speech, 9,70,000 anganvaadi workers have been trained towards the programme and will be working around the massive available data.

This movement targeting women and children is crucial to the womb, soul, bone and growth of a nation.

Hand workers, women, and women artisans - make the life line of groups that make and would absorb traditional Indian toys.

Cultural activist Jaya Jaitly, who has been intensely involved in uplifting and assisting artisans, weavers and in developing avenues for them, has pointed out earlier to Swarajya how Uttar Pradesh toy makers have been leaving villages to become rickshaw pullers.

Access to material, training, and delegation of work, dispelling of ideas and prototypes in this sector can change lives in a great way.

In helping widen the market for India's traditional toy making industry and ensuring the showcasing, the products and the movement reach people.

The role of traditional Indic and folk toys in the upbringing of children and their place among urban and rural children is grossly underrated.

Six: Empowering the woman in the last villages on borders

Uttarakhand is fighting the issue of outmigration. To counter the problem, among other measures, the state government is encouraging the use of available natural resources to improve livelihoods.

Similar measures are being taken by other state governments in sourcing and reviving of indigenous textiles and weaves, alongside the well thought ambitious schemes centered on North East Region (NER).

The Ministry of Textiles has taken the step of opening the first Center of Excellence in Almora "for the preparation and research of natural fiber by the plants found in Himalayan regions".

This should make just a tipping point of futuristic large hearted convergence.

Seven: Use the textile ministry to stitch a social fabric with women in the centre

Woman is the soul of the loom. Where she is not already part of weaving groups, the headstart can be made stronger by collaborating with the state departments and private groups.

Last month, the New Indian Express reported about an interesting programme in Kerala by the Scheduled Caste Development Department where 40 women are getting special training in organic handweaving and block printing.

As per the report, the organiser of this training workshop was a Haryana-based label.

The two designers behind the label and the programme talked about the declining number of weavers in North, against the contrasting picture of Kerala where "the strength of the weaver community hasn’t waned."

The intervention from the designer was aimed at bringing buyers and adding a "fresh touch to the Kerala textile sector".

Irani's intervention in weaving relationships between different regions to encourage and involve more and more women in the weaving and handicrafts can go on to strengthen the role of region and caste diversities in this sector.

Making the woman the boss in varying capacities within weavers' groups will keep the expression cemented to the place of origin and practice.

This fabrics will then translate into a stronger social fabric.

Eight: Lead the project for dialogue and solutions on women’s safety

On 6 December, Irani did make robust use of her views pitch, temperament and volume in Parliament. This was her moment to say that politicising of rape will not be accepted.

Attacking a section of the Opposition, she raised some valid points on the need to stop communalising rape. The spirited fight goes to women, but they need a more concentrated dialogue.

Irani must speak directly to women, on their feedback surrounding their safety and environment, their problems, their role in ensuring, shaping, demanding and securing a safe environment in all fields of life.

Her opening a communication channel with them - preferrably via radio and mobile, will surely help other ministries and related departments and state governments in identifying loopholes and in redflagging smokescreens posed by those who politicise and communalise rape.