How The Congress Walked Into A Tragedy In Karnataka 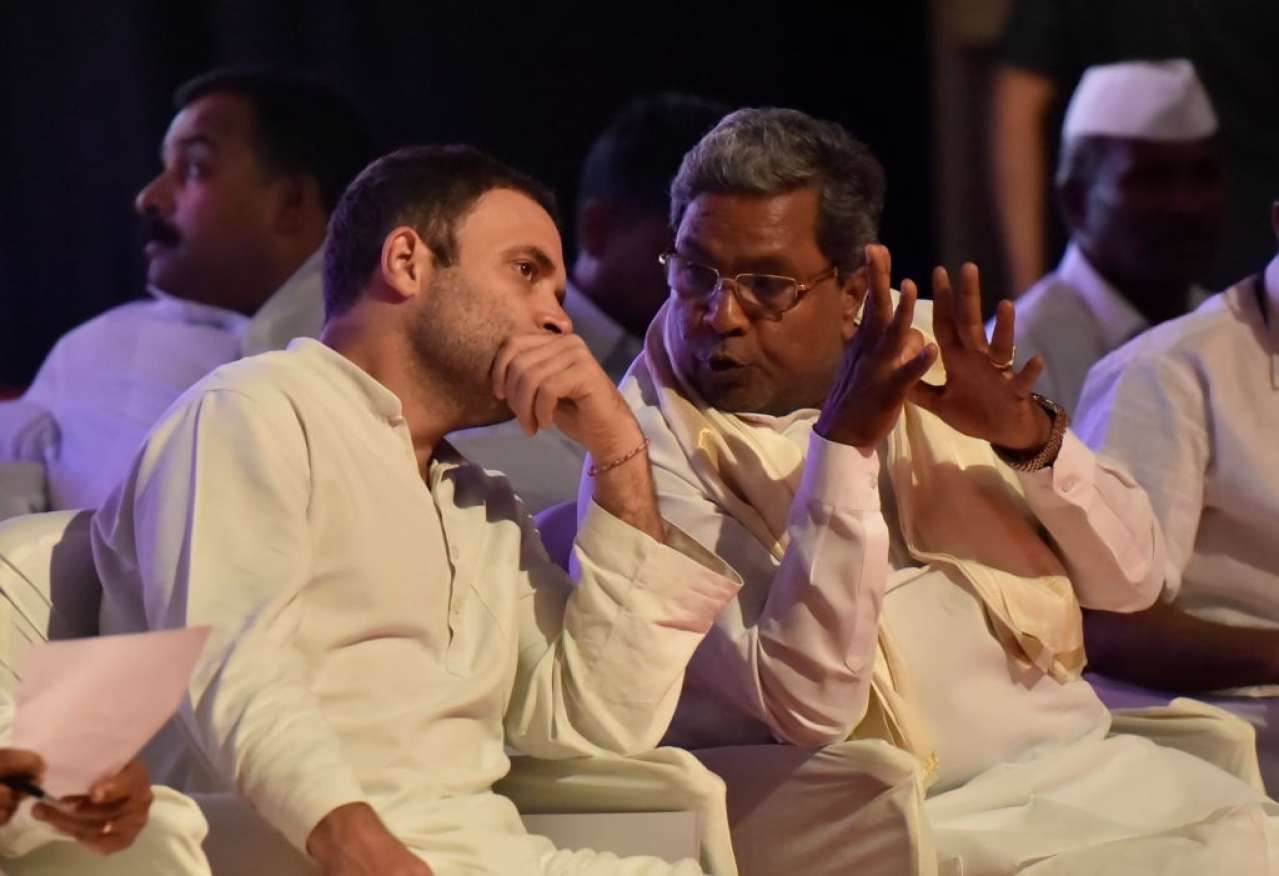 In W W Jacob’s popular short story The Monkey’s Paw, the protagonist gets a monkey’s paw that would grant him three wishes. His first wish is that he gets a hundred dollars. The poor man, however, has no idea what is in store for him. His only son is killed in a factory accident and the factory owners give a hundred dollars to the bereaved parents as compensation. The larger message of the story is very simple – be careful what you wish for.

While watching the near delirious reaction of Congress supporters as well as members of mainstream media as Bharatiya Janata Party (BJP) failed to prove majority on the floor of the Karnataka assembly, thereby paving way for Congress to retain power in the state, reminded me of this old story. I have long maintained that it is in democracy’s interest that BJP has a strong opposition and that means BJP and its base need to take a few losses on the chin in the larger interests of the country. I am not convinced however, that this is a win that would help Congress in the long run.

To start with, forming a government has swept the enormity of reversals the party has suffered in the state. Congress didn’t win Karnataka. They didn’t even do well. They lost a little over a third of their MLA strengths, their chief minister lost one seat by a wide margin and won the other with the skin of his teeth. Nearly half of the cabinet members lost their seats. This loss in a South Indian state against a supposedly ‘Hindi speaking’ party like BJP ought to have set the alarm bells ringing inside Congress. Instead, the starved for win party leadership and cadres are busy celebrating. Past experiences tell us that Congress hasn’t learnt its lessons even when handed crushing defeats, I won’t hold my breath over them introspecting after getting power.

As a corollary to the above, this victory would also most likely postpone a much needed internal assessment of Rahul Gandhi’s leadership. The old guard with sympathetic mainstream media are already hailing Gandhi’s genius at forging this post-poll coalition, reaffirming the old Congress tradition of ‘win because of Gandhis, loss because of someone else’. Even assuming for a moment that all credit given to the Congress president is well deserved (a generous assumption), the lesson from Karnataka is that Gandhi is only effective when the situation is close as it was in the state. He is yet to win an election outright on his own unlike his principle opponent Narendra Modi, who has delivered more often than not come election time. A loss in Karnataka might just have been the final nudge the beleaguered Congress needed to finally hold Gandhi responsible for an electoral loss. With the opportunity gone now, Congress goes into the next 12 months with a campaigner, who can’t win elections but still has one win to silence dissent.

Most importantly perhaps, by ceding the CM’s post to a regional party with lesser number of Members of Legislative Assembly (MLAs) than it, Congress has all but admitted that it won’t lead a possible coalition against Modi’s National Democratic Alliance (NDA) juggernaut in 2019. Apart from Punjab, the only two electoral successes Congress has tasted (Bihar and Karnataka) have both come when they have played junior partners to regional satraps. It is impossible that other aspirants in opposition are not taking notes. Already West Bengal Chief Minister Mamata Banerjee’s tweet mentions the Janata Dal (Secular) of JD(S) leaders by their names while not acknowledging Gandhi or local Congress leaders in a similar manner. Congress’s desperation to keep BJP out of power has pushed them into accepting this position and unlike in past, the party won’t find it easy to turn the tables on its allies. Couple of weeks ago Gandhi mentioned that he was ready to become a PM in 2019, Karnataka is a rude reminder to him that for his PM aspirations, BJP losing in 2019 is merely a necessary condition, not a sufficient one.

Even within the state, this post-poll alliance is bound to push Congress further into a corner. With the general elections less than 12 months away, Congress now looks at sharing Lok Sabha seats with JD(S). Ditching JD(S) before general election is not an option if Congress wants a shot at being invited into any coalition. Pre-poll alliances are hard because seat sharing with an external party invariably ends up alienating a faction within the party. The situation in Karnataka is all the more acute since both parties have a largely overlapping target demographic. For Congress, this means further weakening an already depleted on-the-ground organisation.

As a result of their rhetoric last week, there is another unintended consequence that Congress might have to deal with. Congress accused BJP of trying to steal its MLAs away, even releasing a recording of an alleged phone conversation of BJP leaders offering bribes. With law and order being a state subject, it would be nearly impossible for Congress to now avoid a further investigation of the charges. Unless they can prove a case against one of the prominent BJP leaders, these phone recordings can come back to haunt Congress. Failure to produce proof and use it to prosecute BJP leaders would mean Congress’s charges of horse trading were largely false and made with an eye on the trust vote.

It would also allow B S Yeddyurappa to build onto the sympathy his speech on the assembly floor yesterday garnered. Without a proven charge of horse trading, all that one could accuse Yeddyurappa and BJP of is of aspiring to form a government without having adequate numbers. Atal Behari Vajpayee aspired similarly in 1996 and even though he lasted only 13 days, he was rewarded with single largest party status in two subsequent general elections. Furthermore, as Congress stashed their MLAs in resorts and moved them from place to place, failure to prove horse trading charges would point to an appalling degree of distrust towards its own elected representatives. This is the second time in about a year that the party has confined its MLAs before a crucial vote and it speaks very poorly about both the central leadership as well as the state representatives.

It is impossible to close this discussion without raising two strategic issues within the Congress party itself. First, as Barkha Dutt’s tweet here mentions the old guard of the Congress, savvy litigators and backroom negotiators like Kapil Sibal and Abhishek Manu Singhvi came through for the party where it needed them. However, it is easy to lose sight of the utter un-electability and lack of mass appeal of most of the Congress old guard. Having saved the party in a crucial situation once, now these leaders are sure to extract its pound of flesh to retain stranglehold on the core decision-making for as long as possible. It was no coincidence that Congress lost much of its electoral dominance under the watch of these eminences. In such a situation, is it too sceptical to feel that as long as the old guard is calling shots, leaders with genuine mass appeal (Himant Biswa Sarma comes to mind) would continue to be side-lined? In such a situation, how does Congress hope to mount a challenge in 2019?

Second is of course about Congress’s systematic and rather vicious attack on the institutions since losing power in 2014. In last week alone, Gandhi compared recent events in Supreme Court to events in Pakistan. Yesterday, Sanjay Nirupam compared the Karnataka governor to a dog. Enough has already been discussed about the party’s unsubstantiated allegations against the Election Commission of India and the electronic voting machines. These are not actions of a party that believes they have an easy way back to power, for institutions once dragged into political turmoil would find it difficult to rise above it even if tomorrow the situation changes for Congress politically. The Supreme Court’s exemplary behaviour in this case has only further dented the party’s credibility. This is like a large outstanding that Congress is putting on a credit card that their future generation will have to pay back with interest.

In Margaret Mitchell’s Gone With the Wind, the protagonist Scarlett O’Hara tells Rhett Butler that in the difficult situations surrounding her due to the civil war, she felt like she was rowing a heavily loaded boat in a storm and she was having so much trouble simply keeping afloat that she could not be bothered about things like good manners. She asserts haughtily that there is time for such things (in future)

Rhett replies: “it’s hard to salvage jettisoned cargo and, if it is retrieved, it’s usually irreparably damaged. And I fear that when you can afford to fish up the honour and virtue and kindness you’ve thrown overboard, you’ll find they have suffered a sea change and not, I fear, into something rich and strange”.

A combination of desperation to keep BJP out at any cost with the giddy euphoria of performing the great escape, has somehow convinced Congress leadership that throwing baggage of respect for institutions as well as people’s mandate is necessary to stay afloat.

What a great tragedy it would be, if a few years down the line, it discovers the cargo it threw overboard is either lost forever or irreparably damaged.

Get Swarajya in your inbox everyday. Subscribe here.
Tags:
584 Shares