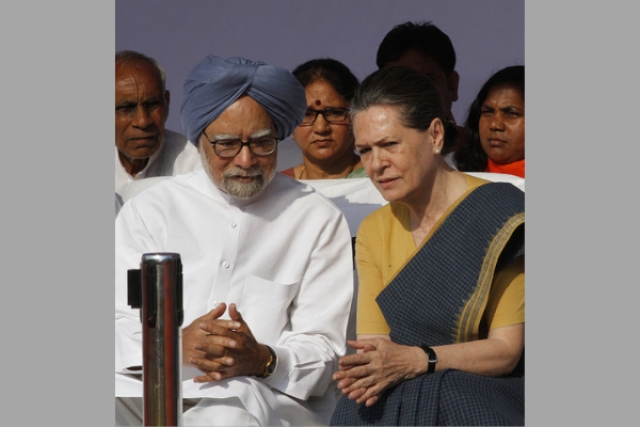 We have always tried to maintain brotherly relationships with our neighboring countries. The sad part is that our emotions have never been respected. I want to make one thing very clear that our wish on having peace and harmony should not be misunderstood as our weakness. People who are continuously encouraging terrorism from their soil, we want to tell them that we are competent of giving a befitting reply to them.

No, this is not Prime Minister Narendra Modi’s statement against Pakistan now or in the recent past. It was what the then Congress president Sonia Gandhi said on 21 December 2008 at Raubirsinghpura in Jammu at an election rally.

The statement was made within a month of terrorists led by Ajmal Kasab attacking Taj Hotel, Victoria Terminus and a couple of other places in Mumbai on 26 November.

The same day, the then Defence Minister Pranab Mukherjee told Indian chiefs of various foreign missions that effective steps were needed to take action against those who were behind the terrorists attack in Mumbai. Specifically referring to Pakistan, Mukherjee said:

We have so far acted with utmost restraint and are hopeful that international community will use its influence to urge Pakistani government to take effective action. While we continue to persuade the international community and Pakistan we are also clear that ultimately it is we who have to deal with this problem. We will take all measures necessary as we deem fit to deal with the situation.

But two days later, Mukherjee told reporters that “we request Pakistan to act on our request”.

It was a big change in language and approach within 48 hours by the Indian fovernment, fortified further by what the then prime minister Manmohan Singh told reporters outside Parliament that day.

What we want from Pakistan is to dismantle the terror machine. That is the one demand. This is in the interest of the people of India and Pakistan. The terror machine should be dismantled without any further loss. The issue is not war. The issue is terror and territory in Pakistan being used to promote, aid and abet terror here. I think that is the issue. Nobody wants war.

Why these are being quoted is because in an article in the Economic Times, former Air Chief Marshal S Krishnaswamy says that after the terrorist attack on Mumbai, the Indian Air Force (IAF) has suggested a surgical strike but the (then) government resorted to caution and restraint.

It is intriguing, and looking at various correspondences on the issue that period, probably India was restrained by the US, its then president George Bush and even, perhaps, incoming president Barack Obama.

At a meeting with opinion makers in Lahore on 8 December 2008, US senators John McCain and Lindsey Graham said they were coming after meeting Singh, who, McCain said, was “emotional and visibly angry”.

McCain told the opinion makers that Pakistan must respond quickly since “Prime Minister Manmohan Singh said he will act within days”. The US senator, in response to a question what India would do if Pakistan failed to act, speculated New Delhi could attack the (terrorists) camps.

Before travelling to Lahore, McCain and Graham met Manmohan Singh in New Delhi on 2 December along with another senator Joseph Lieberman and the then US ambassador to India David C Mulford. The then national security advisor M K Narayanan was present in the meeting.

The then prime minister told them that the mood of the Indian public and politicians was the angriest he had ever seen in his political career. He urged strong US pressure on Pakistan to “take strong and swift action against LeT and all those involved in the Mumbai attack”.

Singh told the US team that the Mumbai attack was a “quantum leap in military sophistication” that required phenomenal planning, training and mastermind.

He is further reported to have told them that the misery he had seen in the hospitals from Mumbai attacks “haunts me and fills me with outrage”.

A cable on the meeting sent by the US embassy in New Delhi reported:

The Prime Minister noted that India is heavily engaged in Afghanistan and will stay the course despite its losses there; “we only ask the world to stay the course against terrorism.

Probably, the cable mention of Singh saying he has had a conversation with the president-elect (Obama) and having consultation with then president Bush is an indicator of what could have, perhaps, happened. The cable says:

Was the US under pressure to restrain India in acting against Pakistan? A million dollar question but the US Embassy in China sent up a cable to Washington on 9 December 2008 saying that Chinese scholars had suggested the US take measures to restrain India from taking action that “could result in regional conflagration”.

They also conceded that China’s ability to defuse the situation was limited. South Asia expert Rong Yin said “the US must rein in any Indian moves towards aggressive action against Pakistan”.

The US intervention seems obvious when the then Pakistan Interior Minister Abdul Rehman Malik told the US ambassador in Islamabad on 19 January 2009 that his government was serious to prosecute those in Pakistan who were involved in the Mumbai attack.

Malik also praised the US sharing the interview of Kasab (who headed the Mumbai attack) by the Federal Bureau of Investigation (FBI) and said his government was tracking each portion of his testimony to prosecute those involved. (India allowed the FBI access to Kasab and interview him.)

On 12 February that year that the FIR on Mumbai attack was filed by the Pakistan government and Malik confessed the role of Pakistanis in the Mumbai attack. However, till this date no one has been convicted nor has Pakistan stopped harbouring terrorists in its territory.

A couple of weeks later, the then Indian Minister of Home P Chidambaram met FBI Director Robert Mueller and acknowledged the “great help” of the US agency. During the meeting, Chidambaram expressed “grave concern at the possibility of further terrorist attacks against India”. The US embassy cable reported:

Pointing to the upcoming parliamentary elections in India, he noted that it was an ideal time for terrorists to instill fear and panic and to arouse communal passions and conflict. He warned that the Lashkar-e-Taiba today is no longer India or Pakistan focused. It has the capacity to easily cross borders and hit any one of the 12 countries on its target list.

During the meeting, Mueller told Chidambaram that though Pakistan had assured full cooperation in the Mumbai attack case, nothing had materialised.

In the last week of March, the United Progressive Alliance (UPA) government seemed to have put the Mumbai terrorist attack on the back burner and Singh came out all guns blazing against the Bharatiya Janata Party and its prime ministerial candidate Lal Krishna Advani at a rally in New Delhi to release the Congress party manifesto.

Singh has never been able to digest the fact that Advani had called him “the worst prime minister India has ever had” and never held back in criticising the senior BJP leader in any available forum.

At the election manifesto meeting, Singh called Advani “an opportunist” and “unfit” to be prime minister and pointed to Gujarat riots and terrorists attacks on Parliament and Red Fort. He made no reference to the Mumbai attack that had taken place a few months before that and under his rule.

In August 2009, the then joint secretary of the Indian external affairs ministry T C A Raghavan complained to chiefs of foreign missions that Pakistan was failing to take action against Lashkar-e-Taiba terrorist Hafiz Saeed and it was making it difficult for India to move forward with “meaningful engagement” in relations with Pakistan.

The UPA government stand on tackling terrorist attacks in the country only got diluted further as its term progressed.

On 12 May 2011, at joint press conference in Kabur along with Afghanistan president Hamid Karzai, Singh called for a thorough probe of Al Qaeda founder Osama bin Laden’s presence at Abbottabad in Pakistan for a long time. He, however, ruled out a US-type action by India to eliminate wanted Pakistan-based terrorists.

When reporters asked if India would adopt US type operation, Singh said

The statement, then the media interpreted, was clear that the UPA government had no intention of taking strong action against terrorists supported by Pakistan.

In July that year, India made a goof-up during a joint statement with Pakistan on the 26/11 Mumbai terror attack when the then External Affairs minister S M Krishna met his Pakistani counterpart Hina Rabbani Kar. The statement said India and Pakistan had “expressed satisfaction on the holdings of meetings on progress of the 26/11 trial”.

It came two days after Chidambaram expressed dissatisfaction to his Pakistani counterpart at a summit in Thimphu, Bhutan. The then foreign secretary Nirupama Rao told the media that India had expressed satisfaction only over talks but officials in the Home Ministry were upset because these meetings yielded no results.

These developments make it obvious that the UPA government failed to drive home its advantage in 2008 after terrorists attacked Mumbai. The global community was then behind India what with citizens of other countries too murdered.

Probably, the US with its Afghanistan engagement in mind, reined in India. Probably, the Congress and its leaders gave in to pressure from Washington. Probably, there were other compelling reasons like the elections to the Lok Sabha being near.

The problem with the Congress is neither does it act when it is in power nor does it back other governments when it is out of power. Kanchan Gupta, member of former prime minister Atal Bihari Vajpayee’s office, has described in his blog how the Congress was ambivalent in its stand when an Air India aircraft (IC-814) was hijacked from Kathmandu by terrorists.

Even now, the concern for the Congress or the opposition or some of the so-called 'doves’ is the fallout of Indian government’s action on the forthcoming elections to the Lok Sabha on them.

In Chidambaram’s own words to the then FBI director, elections are the ideal time when terrorists strike. The UPA and Manmohan Singh had all the freedom to tackle the situation in 2008. Let NDA and Modi be given the same freedom. Time that we stood up to terrorists and their never-ending threats.