‘Human Shield’ Controversy: Why Both Army And Critics Have Handled It Wrong 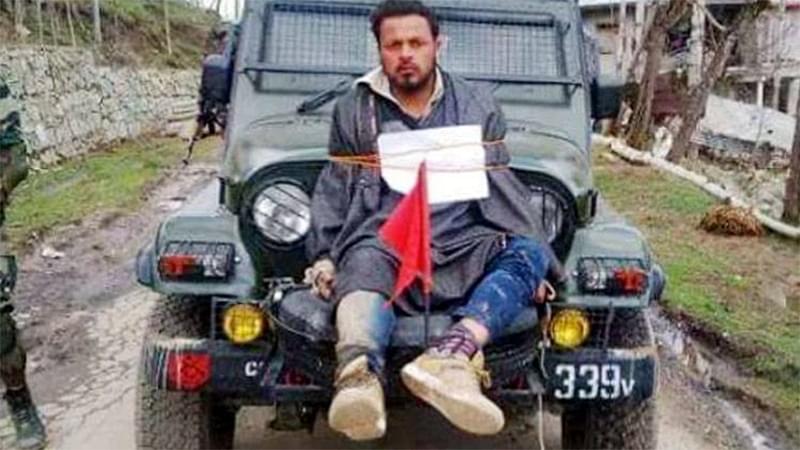 Neither the critics nor the supporters of the army major who used a Kashmiri civilian as “human shield” to prevent violence and loss of lives are fully in the right. Both should have shown greater maturity in dealing with the fallout.

On 9 April, an army major was called in to rescue Election Commission staff from mob violence. Given the size of the crowd pelting stones, he decided on the spur of the moment to grab one of them – Farooq Ahmed Dar – and tied him to the front of his jeep. This stopped the stone pelting and the army moved the people to safety using him as human shield.

While Kashmir Valley-based parties, and especially the National Conference of Omar Abdullah, and many “liberal” voices in mainstream media have been critical of the decision to use Dar as a human shield, other voices, especially those supporting the government, and one Congress Chief Minister (Capt Amarinder Singh, a former armyman himself), have valourised the major’s decision to make an unconventional step to save the officials trapped in the stone-pelting. Singh wrote in The Indian Express last week that “Tough situations warrant tough reactions, and dangerous situations often, if not always, merit daring actions. When Major Neetul Gogoi decided (and, mind you, it could not have been anything other than a split-second decision) to use a civilian as a ‘human shield’ to protect his men from a stone-pelting mob, he was simply reacting to a tough situation in a dangerous environment.”

In contrast, Omar Abdullah, reacting to the army chief’s decision to issue a letter of commendation to the major, asked an important question: “Have we set a precedent that allows an individual officer to take law into his own hands and use an Indian citizen as a human shield as and when he deems its appropriate and necessary – to save lives.”

The answer is both: an army officer cannot arbitrarily take the law into his own hands, but when he does take an out-of-the-box decision to save lives, he cannot be treated like a law-breaker either.

The right response, both of the Indian state and the army, should have been to accept the infringement of the law as real, but at the same time exonerate the major for his actions taken under trying circumstances. The action need not set a precedent, nor become a standard operating procedure (SOP) for tricky situations like the one the major confronted in Budgam last April.

This is where the government has gone wrong.

One, Whenever an armyman breaks the law for a larger public purpose, the action should not be followed by a public reward. A private commendation would have been enough along with remarks explaining his conduct in his service record, with no negative implications for his career.

Two, The names of the persons involved should never have become public knowledge, not should the major have been brought before the media to make his statement. Now, the major will be a marked man, and whatever he does in his career, it will be the “human shield” event that will dominate his CV. It is not good for him or the army. Anonymity should be the norm in such cases involving law breaking with a clearly admitted higher purpose.

Three, Given this incident, the army should create a new SOP for situations like these so that human shields are not needed. Human shields do not always work, and if this ever becomes a regular practice, the army will lose its moral authority in the Kashmir Valley. And the stone-pelters may even choose to injure or kill the human shield and the army will have to take the blame for it. What worked once, may not work repeatedly.

Four, The incident should never have been politicised, with the Defence Minister and the Attorney General making statements in support of Gogoi. This was completely unnecessary, since the army could have taken its own call without politicians getting to justify its actions.

But the critics are also wrong. Abdullah is right to ask whether human shields will become standard practice, but the reality is what Capt Amrinder Singh noted: that tough situations demand tough responses.

Situations like the one in Kashmir Valley, where jihadists and Islamists are trying to take violence to new heights, cannot be won with traditional tactics of routine operations. Unconventional warfare cannot ever be won with conventional tactics, especially when stone-pelters themselves use human shields to let terrorists escape. It is worth recalling that even the US now believes in assassinating its terrorist enemies with drones and technology devices. Not the noblest of tactics to use against unknown human targets who may or may not be guilty, but no one questions this.

It is fine to talk of Geneva conventions and rights of citizens, but there are the rights of the general public and unarmed state officials to counter-balance against these high-sounding words.

It is also fine to point out that the army is carrying the can for political failures, but these political failures are not that of only the BJP or the Congress, but also the Kashmir Valley parties, including National Conference and PDP. So Abdullah can hardly pretend that he has not been a contributor to this situation.

Sometimes, when the goals of our enemies (Pakistan and its Islamist supporters in Jammu and Kashmir) are completely at variance with that of a secular or liberal India, political solutions may not even be feasible. Pakistan’s goal is annexation of at least the Muslim-part of Kashmir, and they will not stop there if we follow a namby-pamby policy of regular appeasement of the separatists. Anyone who thinks Kashmir is Pakistan’s only unfinished business, should ask himself why that rogue state supported Khalistani separatists in Punjab.

It is facile to talk about winning the hearts of Kashmiris rather than getting the army to subdue them first: what hearts are we talking about when a large chunk of the population has been heartlessly pushed out of the Valley through rape and threats of violence? What hearts can be won when the remaining Muslim population in the Valley has no reasonable demands to make of the Indian state? If winning hearts in the Valley means writing off Indian secularism, what will we have won?

Abdullah and Kashmiri parties have to win the hearts of the Pandits that the Valley threw out before the rest of the Union can go further to win hearts in the Kashmir Valley. Winning hearts is not a one-way process where India has to give and Kashmiris only take.