In Maps: How The BJP Under Kalyan Singh Swept To Power In Uttar Pradesh In 1991 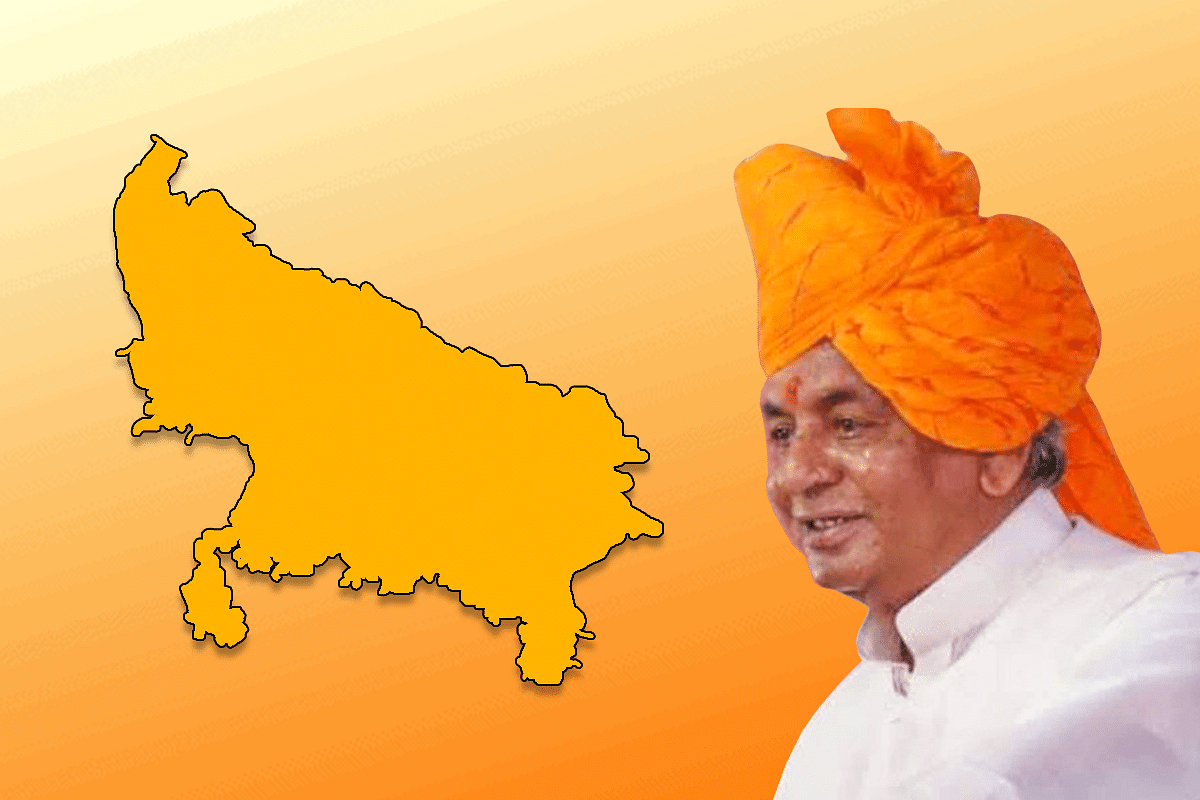 It is an interesting coincidence that both Mulayam Singh Yadav and Kalyan Singh entered provincial electoral politics in 1967. It is also ironic that their traditionally antagonistic parties, the Jan Sangh and the Socialists, were in temporary alliance at that time against the Congress.

Kalyan Singh was returned from Atrauli on a Jan Sangh ticket, beating a Congress opponent. He won by 4,351 votes and managed 40 per cent of the popular vote in a fractured, four-way affair. Yadav won Jaswantnagar for the Sanghata Socialist Party in an even more fractured contest, though with a higher margin. The Congress candidate there came fourth.

1967 was an eventful year. Indira Gandhi barely managed a majority in the Lok Sabha, which she lost within two years. The Congress was also reduced to a minority in UP, as a result of which, Charan Singh split the party to become the first non-Congress chief minister of UP. It was also the year in which Socialist leader Ram Manohar Lohia died.

Although they began their political careers somewhat on the same side, Kalyan Singh and Mulayam actually represented opposing arcs of an incipient political spectrum, in steady, languorous churn, as a beaten and battered India emerged from the stupor of centuries, to find her feet once more.

Yadav was driven by his atheistic, Western ideologies of social justice, narrow, shallow demarcations of divisive identities, plus fanciful theories of unmanageable statism and unaffordable welfarism, taught to him by Lohia. That lofty intellectualism was, however, conveniently sacrificed by Yadav at the altar of political expediency once he learnt that it was far more practical and profitable to build and run a Muslim-Yadav vote bank, since whoever ruled Uttar Pradesh ruled India.

Singh, on the other hand, looked at the future in older, civilizational terms, by which society and polity were expected to complement one other, through reason and merit. It was the tougher road, but the one his conceptual and political mentors – the Rashtriya Swayamsevak Sangh (RSS), and the Bharatiya Janata Party (BJP) – were inexorably set on.

No two men could have been more different, even if both stayed firmly provincial for the most part, in Uttar Pradesh, in the shadow of an overweening Congress. Yet, both allied briefly once more, in 1989, before the spin of history careened the two political arcs permanently apart. That was also when both men came into their own.

In the summer of 1989, India was ablaze with incendiary electoral strife. Prime Minister Rajiv Gandhi of the Congress couldn’t show his face in public for fear of being called a thief. The opposition, led by NT Rama Rao, had resigned en masse from parliament. The Bofors scandal had peaked, along with half a dozen other scams, and VP Singh, along with Arif Mohammad Khan and Arun Nehru, was on the warpath.

At the same time, Rajiv Gandhi’s appeasement politics had blown up in his face after he allowed the shilanyaas at Ayodhya (as a flagrant sop to the incensed, following his shameless kowtowing to the Muslim community over the Shah Bano case). Numerous communities were realigning themselves, as much in disgust of what the Congress had attempted, as to take electoral advantage of the growing anti-Rajiv mood.

Still, the Congress stood like a monolith, especially in the provinces. ND Tiwari was the chief minister in UP, where they had 269 seats out of 425 (including Uttarakhand), with 39 per cent of the popular vote. The BJP had just 16 seats and 10 per cent of the vote.

Sensing the mood, the BJP, the Left, and the Lohia-ites (a catch-phrase for the social justice parties of the Gangetic plains) banded together in 1989. The results were telling: the Congress lost both the general and UP assembly elections. VP Singh became prime minister, and Mulayam, chief minister of UP – both with BJP support.

Surprisingly though, the biggest beneficiary in 1989 was the nascent Bahujan Samaj Party (BSP) of Kanshi Ram. Although the Lohia-ites and the BJP gained more seats, their vote shares didn’t rise by much. As the tables below show, the bulk of the vote shift was from Congress to the BSP.

This is where Kalyan Singh proved his mettle. Through 1990, he held his water as a junior alliance partner in UP, while his party launched the Rath Yatra nationally. In this same period, VP Singh announced the implementation of caste-based reservations per the Mandal commission report to consolidate his position. It didn’t work the way he thought it would, since religion and caste identity suddenly became electorally fungible items, especially among the OBC groups, who would benefit most from the reservation.

When the contradictions inherent in that move became too great for VP Singh and Mulayam to bear, not least because of the strain the Ram Janmabhoomi movement caused to the crucial Muslim vote, the BJP withdrew support in both centre and state. In a sense, the BJP adopted a somewhat similar approach with Mehbooba Mufti in Jammu and Kashmir – of fashioning a patently unworkable coalition, doomed from the start, to consolidate one’s position so as to expose those fallacies which reign from within.

As expected, Mulayam had no option but to turn to the Congress for support; while in Delhi, VP Singh made way for Chandrashekhar, and a rump outfit supported by Rajiv Gandhi from the outside. Within months, it was election season again, both at the centre and in UP.

Kalyan Singh understood that this realignment of communities, which had commenced from the mid-1980s, would only sharpen further. If, in the first instance, the Dalits had gone to the BSP and the Yadavs plus a portion of the Muslims to Mulayam, the balance half were still poised in hesitant, unsure motion.

According to Rajiv Srivastava, it was then RSS chief, Balasaheb Deoras, who privately advised Kalyan Singh to lead the charge in UP. Mandir, Deoras believed (as did many others, publicly, including BJP thinker Jay Dubashi), was the antidote to Mandal.

This story may be apocryphal, but the fact is that Kalyan Singh was one of the first to be arrested by the Mulayam government in late 1990, when appeasement push came to dharmic shove. And it is Kalyan Singh who assiduously cobbled together various non-Yadav OBC groups across UP, through a tempestuous spring of 1991.

The assembly results were stunning:

The BJP’s vote share went up by 20 per cent to 31; they received a simple majority – 221 seats; Kalyan Singh was sworn in as chief minister, and the Congress was nearly wiped out.

This time, the bulk of the vote swing was from the Congress to the BJP, and from the others, again to the BJP. The Lohia-ites did hold their own, winning 126 seats, but the BSP failed to improve its position; that surge would come only later, after Mulayam made the mistake of aligning with the BSP to keep the BJP out.

Thirty years later, Kalyan Singh is no more, but his impact remains and will remain for a long time to come. The BJP is now numerically an OBC-dominant party, which wins both state and general elections on its own steam. The miseries, divides and prejudices of caste are fully on the ebb. In the 2019 general elections, the BJP won 62 seats out of 80 in Uttar Pradesh, with almost half the popular vote.

Now, the appeasement vote may be reducing in relevance with each passing day, but the struggle is not over yet. Another assembly election in UP beckons; in preparation, the secular parties and the Lohia-ites, along with a non-existent Congress, are seeking to craft a united alliance, because everyone knows that UP is the key.

Will it work? We shall have to wait a few more months to see how these efforts evolve, and if they are indeed successful in reconciling structural and ideological contradictions. Asaduddin Owaisi, for example, would surely have a thing or two to say on that.

Nonetheless, if the widespread, spontaneous outpourings of heartfelt tributes upon Kalyan Singh’s passing are any indicator, the forthcoming assembly results would probably reflect his eloquent views once expressed long ago, on how society is meant to function, and his contribution in that regard: “No regrets, no repentance, no sorrow, no grief”.

Mulayam Singh Yadav and Kalyan Singh may have commenced their political journey together, but half a century later, when the wheel of life has turned so much, it is Mulayam’s divisive identity politics which are being discarded by India, while Kalyan Singh is feted as a legend.