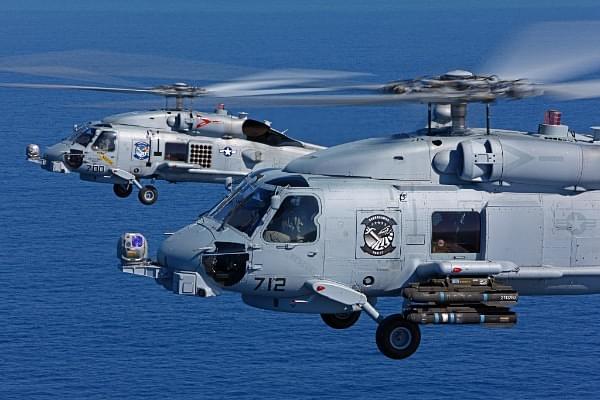 The Indian Navy gets to exhale a bit, as a crucial and long-pending demand for a replacement of its old fleet of Sea King anti-submarine/utility helicopters gets off the ground. The Indian Ministry of Defence (MoD) on 25 August 2018 cleared decks for the navy to go ahead and contract for 24 Lockheed Martin-Sikorsky MH-60 Romeo maritime helicopters in a government-to-government deal with the Pentagon. The deal is expected to be worth $1.8 billion.

The move comes days before Delhi and Washington engaged in a crucial ‘2+2’ dialogue in the Indian capital, in which US Secretary of Defense James Mattis will meet with his Indian counterpart Nirmala Sitharaman on a range of issues, including military trade. The MH-60 Romeo proposal has been key to discussions over the better part of three years now.

The move is the first major step towards an expanded requirement detailed by the Indian Navy last year for 123 medium multi-role helicopters to replace the Mk.42B and UH-3H Seakings service. The move also brings to a formal end all speculation that the the MH-60R’s older cousin, the Sikorsky S-70B, was being considered for a smaller fleet of 18 units. In a troubled earlier iteration of the contract in question here, designated MRH (multi-role helicopter), the Indian Navy had veered towards the Sikorsky S-70B in a face-off against the NH Industries NH90. With Lockheed Martin’s acquisition of Sikorsky and the expanded requirement in mind, the S-70 Bravo fell off the table, making way for the more capable MH-60 Romeo and the number pushed up to 24.

The MH-60R uses the same airframe as the S-70B, but with major improvements to its cockpit and avionics, and changes to its tailwheel to ease handling on a ship deck.

With today’s decision, the navy’s formal future requirement for such helicopters now stands at 147 helicopters, making it one of the largest copter contests in the world. No time frame, however, exists on the 123 future helicopters, with budgetary and other pressures coming into play. That acquisition, which will be executed under the Strategic Partnership model, will be a far more complicated venture involving an Indian production line. Sources in the navy tell Livefist, the acquisition of the 123 ‘N-MRH’ helicopters will begin once the navy has gotten off the ground on its other major helicopter acquisition programme — the 111 naval utility helicopters. The MoD, crucially, also cleared decks today for this latter procurement to move forward.

But with the trigger pulled on 24 to start with, the navy has every reason to feel upbeat.

Progress towards a contract for new airframes is major relief for the Indian Navy that has fought hard through troublesome meandering contests and red tape to replace this crucial airborne capability. In the recent floods in the southern Indian state of Kerala that killed hundreds and displaced thousands, the navy’s old Sea Kings performed admirably in rescue operations. But to all involved, it has become clear that it’s time for them to be retired.

If the navy’s plans stay on track to progress the requirement for 123 more helicopters as a competitive bid, it will float a tender next year. The 123 NMRH helicopters will operate off aircraft carrier INS Vikramaditya, the two upcoming indigenous aircraft carriers (Vikrant and Vishal), the three Shivalik-class stealth frigates, the follow-on P-17A frigates as well as current and future destroyer types (Delhi-class, Kolkata-class and Visakhapatnam-class). Apart from the MH-60R, contenders will likely include the NHIndustries NH90 and Airbus Helicopters H225M (earlier EC 725). As reported by Livefist last year, the Indian Navy has split its requirement into two variants: a standard multi-role version and one kitted out specifically for special operations.