India Is Not All ‘Secular’ And ‘Communal’ 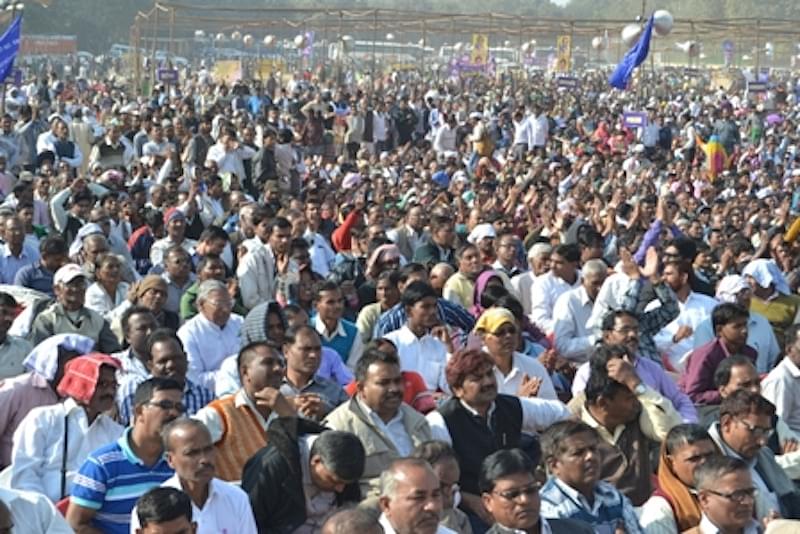 Indian cinema did it for ages. Juxtaposing white (good) with black (bad) and churning out one potboiler after another till the repetition became a tad unbearable.

A hero, spotlessly white, who would not take a step wrong; a villain, representative of forces of darkness, who would not do a thing right; and their fight continued to be the theme which Indian movies worked around. Barring an aberration here and a Guide there, the reel world stuck to the plot for several decades till the 1970s when movies like Deewar promoted the anti-hero.

Yet the evil continued to be uni-dimensional, and strait-jacketed till Vidhu Vinod Chopra moved away from the much-trodden path in Parinda (1989) and portrayed that even the most diabolic of villains, Anna (Nana Patekar), who drives a drill into the leg of a renegade of his gang, can have mortal fear of fire. For good, the new crop of filmmakers is not afraid of exploring the middle ground by painting many of their characters including their protagonists and baddies with shades of grey.

It may sound a bit far-fetched but the then American President George W Bush replicated the Indian cinema analogy into politics and said in the wake of 9/11—his statement, “either you are with us ir against us”—making the world look bi-polar, for-terrorism and against-terrorism. creating an existential crisis for people who liked neither America nor the Al Qaeda.

Lately, this has happened in Indian polity with left liberals and rightists leaving no middle ground for their fellow Indians who may not like to join either. Be it the issue of beef, returning of awards by writers and filmmakers or celebration of Mysore ruler Tipu Sultan’s birth centenary—the message is loud and clear: you are either secular or communal. There is nothing in between.

Speak for people’s fundamental right to eat what they like to eat and the right wing will pounce on you. Tell writers and filmmakers that intolerance has not resumed with the entry of Prime Minister Narendra Modi at the Centre and been in for ages (how can one forget the post-Partition carnage, and the anti-Sikh riots?) and they will stifle you. Or even say that the attempt to hoist Tipu Sultan as a secular, nationalist icon on Indian landscape is flawed because there was no nation in 18th century and the so-called liberals in the left and left of the centre space will brand you communal.

An ultra-aggressive, abusive social media makes it impossible for its natives to be both or neither. You can denounce cow politics and point out that politics over beef will not only hit India’s exports but also create environmental hazards and yet disagree with actors like Aamir Khan that the atmosphere has become so vitiated in the country that he is forced to think of moving out (He has since somewhat sheepishly retracted his statement). You cannot tell the secular lobby that Indian occupation by British and the Muslim rule before that had a history of intolerance. The lynching of Mohammad Akhlaq in Dadri and others in Jammu & Kashmir and Himachal Pradesh is condemnable in strongest terms and need to be punished stringently. But it is certainly not true that Akhlaq is the first victim of communal hate campaigns in the country.

Aamir Khan has a right to say what he feels and what he discusses with his better half Kiran Rao. But in the process of making a private conversation public he has also discredited himself (he promotes !ncredible India on electronic media).

Moreover, why have the police not recorded statement of Danish, son of Akhlaq, who was critically injured by the marauders, even three months after the incident (this is certainly a Uttar Pradesh law and order problem and nothing to do with the Modi government?) Was there more to the incident than what meets the eye? You hear from almost every other local reporter and resident in Bishara that the killing was a fallout of an affair over a girl and the killers deliberately gave it a communal colour. This is what I heard in Bishara when I visited the village after the incident. And this is what a group of newspaper reporters told me more recently in Greater Noida.

If this is true that the political groups—the ruling Samajwadi Party and the opposition (read the saffron family) in Uttar Pradesh played along with the murderers in painting the crime with a communal brush, nothing can be more traumatic than this. It is high time the Noida Police clears the haze.

Take the case of writers and filmmakers who have given back their awards. Where were they when a professor’s hands were chopped off over blasphemy in Kerala in 2010? Where were they when Rajiv Gandhi opened the gates of communal dispute in Ayodhya and overturned the verdict in the Shah Bano case during his prime ministership, and when he justified the killing of Sikhs across the country in the wake of Indira Gandhi’s assassination? Why were they quiet on blinding of over 30 undertrials in Bhagalpur (Bihar) in the late 1970s and early 1980s? Could there be something more intolerant than this? Why do they never speak out against Mani Shankar Aiyar, Salman Khurshid and Shakeel Ahmed? Is it tolerance that Aiyar, Khurshid and Ahmed espouse? Why do they indulge in Hindu-bashing in the name of secularism? Why are they soft on communalism by minority communities and seem to give a long rope to corrupt and castiest elements like Mulayam, Lalu and Mayawati?

Why did they not protest against the Congress under whose regime the disputed structure was demolished in Ayodhya? Why did they not object when Kamal Hassan’s film Vishwaroopam was banned in Tamil Nadu to appease Muslim parties? Why was there not even a murmur of protest when Salman Rushdie’s Satanic Verses was proscribed? Why were they mum when Kashmiri Pandits were looted and thrown out of their ancestral homes and their women raped? Why are they reticent in talking about forcible conversions which were the order of the day under certain Muslim rulers? Agreed that the conversions were as much a result of  thesuffocating caste system in Hinduism, but is it also not a fact that some rulers did convert people forcibly and vandalised thousands of places of Hindu, Jain and Buddhist worship? Do they not consider Taslima Nasreen a writer because she exposes atrocities committed on Hindus in Bangladesh?

Why does the liberal intelligentsia not question the Missionaries of Charity’s opposition to uniform laws on adoption? Why does it allow Trinamool Congress MP Derek O’ Brian to be a torch bearer of secularism even after opposing the uniform secular agenda on adoptions?

It is clear that their outrage is selective and directed at the Prime Minister who they have targeted and abused for long. It cannot be a coincidence that almost all the writers and film personalities making noises on intolerance had opposed Narendra Modi before the 2014 elections, Why shouldn’t their decision to return the awards be construed as an affront to Indians who elected the PM to the highest executive chair and attempt to depose a democratically elected government through a whisper campaign?

The left liberals and the rightist lobbies are frustrated that they cannot enforce their diktat on the common man who is opposed to politics over cow and can see through why Tipu Sultan is being projected as a freedom fighter who took on the British. The common man also understands why Vishwa Hindu Parishad and other Sangh affiliates are selectively focusing on religious conversions and killings of Hindus by Tipu, overlooking the recorded facts that the Tigre of Mysore also granted lands and endowments to the temples and their priests.

Even a cursory look at biographies of Tipu Sultan written by different writers makes it clear that the Srirangapatna ruler was neither a feral bigot nor a secular nationalist secular as made out by the two sides. The fact is that he killed people belonging to religions other than his own but also propped up Hindu shrines which were loyal to his empire. He fought against British to ‘preserve his own power and independence’ (History of Tipu Sultan by Mohibbul Hasan) and also formed a strategic partnership with French for the same reason.

It is a good time to recognise Indians who are appalled by intolerance on beef but who also do not agree that this has been extended to cinema, actors and writers and every other part of the Indian civilization. They would approve if you discredit leaders playing politics over cow slaughter (not limited to saffronites. Mulayam’s Samajwadi Party and Congress—remember Uttarakhand Chief Minister Harish Rawat’s statement on cow slaughter and Mulayam and Azam Khan’s campaign on tending cows—are not averse to playing soft Hindutva card) but may not support attempts to paint India ‘intolerant’.

The middle class may detest the way the secular intelligentsia loathes the PM and his party. It may not approve that you allege intolerance and yet at the same time be intolerant towards the leader you do not like.  You want a blank cheque to abuse the PM.

Let this middle-of-the-road majority, which is more secular than any of the politicians and writers and filmmakers from the so-called left and the right, enjoy its space.

Let us not underestimate the power of the common man. Let him be.