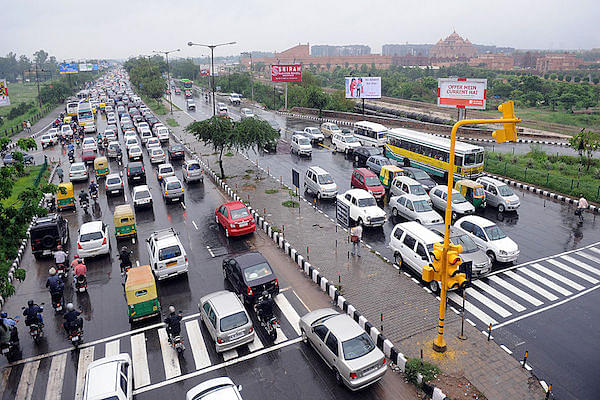 A simple downpour is enough to disrupt traffic in Bengaluru, India’s alleged Silicon Valley. The only valleys one finds are on main roads, and they are called potholes, though they are more like craters. In Delhi, a motorcyclist was killed after he fell into one, and a truck ran over him. In Navi Mumbai, ‎they are building an expensive airport where land sharks made tonnes of money selling pieces of land, but there is no sense of how to cart passengers from there to Mumbai’s city centre.

In all Indian cities, private vehicles and hawkers have occupied public roads for want of parking space and due to high shop rentals elsewhere, even as public transport takes a back seat. In none of India’s major cities can you buy a home without being in an annual income bracket of over Rs 50 lakh.

India is on the road to economic disaster and demographic danger, as it is locked into a rural mindset. India’s urban centres need Article 370, which gives Jammu & Kashmir autonomy from central laws and debilities, more than Kashmir.

India is 32 percent urban, and another 20 percent has “urban-like” features, though these quasi-cities are not classified as urban by the census. And yet, India has no urban sense, no understanding of how cities must be run. This is partly because rural politicians run all urban areas, and they use their political overlordship of cities to make money from real estate. The wealth created by India’s most dynamic economic zones – urban centres – is being siphoned off to rural areas, as we have still not given up the idea that India is largely rural. It isn’t.

The sensibilities of India’s cities are being choked by rural politicians with their narrow mindsets and rural thinking. Little wonder our cities are just overgrown villages, complete with cows and stray dogs roaming the streets.

To summarise, India’s present and future are urban, for this is where the economy is going to create millions of jobs. The rural areas, despite boondoggles like MNREGA, will, in 20 years’ time, become vast open spaces that will be depopulated. Our focus should be to get people off the land, expand urban areas and corporatise a lot of farming, either through direct ownership of farmland or through legalised contract farming. The rural landless have a future in cities, and the landed must be enabled to convert land into cash and business opportunity by becoming co-owners of infrastructure and industry.

India’s urban growth will also be concentrated along the coasts, and in hubs like Kolkata and the northeast, where road trade with Myanmar and Asean can boom. If we had had a friendly neighbour to the west, some of the northern cities too could have become growth hubs but now will remain stunted.

Cities cannot be run like subsets of larger states, though they can become drivers of growth in a state’s hinterland. Cities are states. They need politically powerful bosses and CEOs to run them like efficient corporations. Cities need physical and social infrastructure that is world-class, so that the best and the ‎brightest emigrate there and create wealth, which, when reinvested in the city, can create millions of jobs of various kinds. Cities are social levellers and vehicles of upward mobility for disadvantaged castes and classes.

Cities cannot be created smart artificially or in regions where there is little economic activity. They have to grow organically from a growing business logic and then made smart through smart governance mechanisms and internally generated revenues. ‎They need separate and low tax structures since they are hubs of creativity and enterprise. Right now, even booming metros like Mumbai and Bengaluru are dumb cities, being fleeced by rural politicians with vested interests in stunting cities’ growth.

India is running its cities into the ground by not understanding this simple idea. It is not Kashmir that needs article 370 but India’s growth cities. They need freedom from both Delhi and state capitals to grow and create wealth.

India is already one-third urban. It will become 50 percent urban in two decades. The urban centres are where the jobs will be.

India needs to open up rural areas for increasing urbanisation and corporate agriculture, so that less land will feed more people.

India needs purely urban political parties who understand where India will grow and where it won’t. In 2014, the BJP got 31 percent of the votes and 282 seats. India’s urban areas already have that kind of vote potential. Why are our politicians not getting this?

Also Read: Smart Cities Need Smart Governance: They Can’t Be Run Like Any Other Place