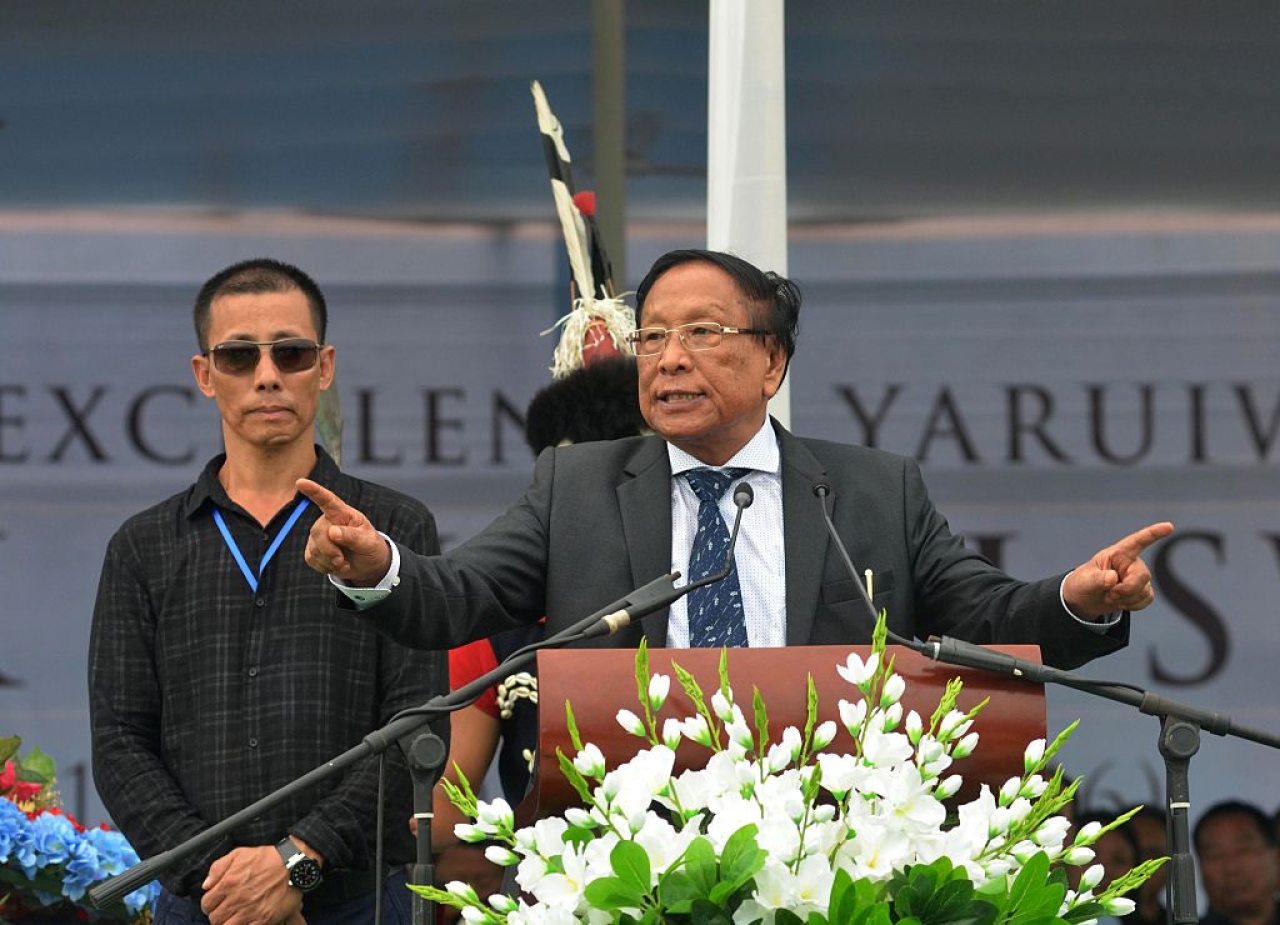 The passing away of Isak Chisi Swu, co-founder of the National Socialist Council of Nagaland (NSCN), on 28 June has brought back into focus the issue of settlement of the ‘Naga Problem’. He was a signatory to the Framework Agreement signed by the Prime Minister last year, generating hopes of a settlement.

Along with Kashmir, the Naga imbroglio has the dubious distinction of being the longest-running conflict in independent India. The Naga conflict is a colonial legacy. It has its roots in the Treaty of Yandebo of 1826 when the British demarcated the boundary between India and Burma, and between the Nowgong district of Assam and the kingdom of Manipur. British commercial interests dictated further ingress into Assam and the consequent consolidation and administration. The Naga areas, on the other hand, held no commercial opportunities or security threats and were conveniently left alone.

Consequently, mutually beneficial adjustments and compromises with varying methods like inner lines/excluded areas, etc. were implemented. Independent India had to consolidate nationhood and not simply control or compromise to maintain governance. Conflict and friction was and is inevitable.

Therefore, the Naga issue is fundamentally a process of consolidation and integration of the Indian national entity that emerged post-colonialism, and not one of secession from an established nation.

The exposure of the Nagas to the outside world during World War I prompted the formation of the Naga Club of Kohima by a few educated Nagas. This resulted in a memorandum to the Simon Commission in 1929 requesting for exclusion from the Reformed Scheme. The British Act of 1935 placed the Naga areas outside the Reformed Scheme and termed the Naga territory as ‘Naga Excluded Area’. It was part of British India and not an independent entity, as some Nagas like to claim.

The District Administration created the Naga Hills District Tribal Council and it was renamed as the Naga National Council (NNC), for the post-war reconstruction in 1945. On 20 February 1947, the NNC submitted a memorandum to the British Government asking for an interim Government for ten years. There was no response. On 26 June 1947, Governor Sir Akbar Hydari signed the Hydari Agreement or the Nine-Point Agreement, which accepted the Governor of Assam as having a special responsibility for ten years after which the treaty was to be reviewed. This was a contentious clause. The agreement was not ratified by the Constituent Assembly. On 14 August 1947, the Nagas declared their independence unilaterally.

A.Z. Phizo became the president of the NNC on 1 December 1950. This was followed by the ‘plebiscite’ in May 1951. The general elections were boycotted in 1952, and the NNC was banned. On 22 March 1956, Phizo established the Naga Central Government. This was changed to the Federal Government of Nagaland (FGN) in 1959. Meanwhile, the underground faction of the NNC had commenced armed hostilities against their over ground cadres and state functionaries. The Naga insurgency followed. The over ground moderates formed the Naga Peoples Convention, which arrived at the 16-Point Agreement with the Indian Government in 1960. The state of Nagaland was formed on 1 December 1963 with special provisions under the constitution. However, underground activities continued.

Through the efforts of the Baptist Church sponsored Nagaland Peace Council, a ceasefire came into effect on 6 September 1964. The talks that followed remained deadlocked with charges and counter-charges over violation of the terms of the ceasefire and the ceasefire was officially over by 31 August 1972. Internal dissension within the undergrounds led to the breakaway group forming the Revolutionary Government of Nagaland (RGN) in 1968. Renewed efforts by the Peace Council resulted in the Shillong Accord of 1975 between the underground representatives (mainly the RGN) and the Government of India.

Under the terms of the accord, the underground representatives agreed to accept the Constitution of India, surrender their arms and formulate issues for final settlement within a ‘reasonable time’. Other members of the underground denounced the accord and the breakaway group under SS Khaplang, Issac Swu and Th Muivah formed the National Socialist Council of Nagaland. Differences within the NSCN split the organisation into the Khaplang (K) and Issac-Muivah (IM) factions in 1988. Phizo died in 1990 and the NNC/ FGN leadership passed on to his daughter, Adinno.

The present ceasefire between the Government of India and the NSCN (IM) came into effect on 01 August 1997 and had been extended for varying periods after that. Ongoing talks have followed. Amidst all the contradictions, compromises and concessions that the Indian state has made, the one consistent and firm stand—which also has unanimous public support—has been the refusal to allow any part to break away or work outside the Constitution. Any demand from any quarter for ‘sovereignty’ or ‘independence’ is, therefore, not open to discussion.

The present ceasefire was achieved by a one-to-one understanding between the highest Indian political leadership and the NSCN (IM). Over the last 18 years, the Union Government has held over 80 rounds of talks with the NSCN (IM) leadership, initially abroad and within the country, including meetings with the Prime Minister and the Union Home Minister. The change of locale for the talks from abroad to within the country indicates a small but perceptible positive indicator of some narrowing of differences. While the ceasefire may not provide a solution, the longer it runs, the better it is for building public support for a peaceful settlement. In the present case, one of the positive outcomes is the public desire and support for peace.

The ceasefire is technically applicable within Nagaland while a major part of the Naga populace and the IM cadres come from outside Nagaland. The Government can make a formal announcement extending the ceasefire to all Nagas without reference to physical areas with a simultaneous declaration that sovereignty and a ‘Greater Nagaland’ is not on the agenda of the ongoing talks. This would dispel apprehensions of neighbouring states, as also clear the confusion on the applicability of the ceasefire to areas outside Nagaland. The ceasefire with the NSCN (K) was a welcome development. It helped erode the NSCM (IM) standing as being the sole representatives of the Nagas, as also remove any apparent indications of the Government not being even-handed. Unfortunately, later developments resulted in its abrogation.

Efforts towards a unification of all Naga factions also needs to be allowed to proceed without any assistance from the state machinery to achieve it. Should they be able to achieve it, the moderate elements may perhaps help tone down their demands. This would also be desirable in the case of any settlement being reached within the present talks. Their inability to do so will remain a serious impediment to achieving an enduring settlement, as experience shows. Tribal identities and affiliations, being highly relevant in Naga society, will also need to be factored in. Isac Swu was a ‘Sema’ from Nagaland, Muivah is a ‘Tanghkul’ from Manipur and Khaplang a ‘Hemi’ from North Myanmar. The Naga Hoho and the Church are influential bodies in Naga society and can play a useful role to find a middle ground between the Government of India and the undergrounds. These institutions must be promoted.

Like in Jammu and Kashmir, the Union Government has been generous in funding the state for developmental activities and, like elsewhere, the implementation apparatus has been porous with funds being inevitably syphoned off. It may be appropriate to remit the money directly to the targeted beneficiaries, thereby, increasing their stake and support for a settlement.

In the final analysis, the crux or the core issue in all insurgencies/agitations is the quest for power. All insurgencies also finally collapse when the insurgents themselves come to power—Mizoram being an example. Within the ambit of the Naga problem and its parameters, conditions will have to be created to allow the insurgent leadership to come to power. After the recent rounds of talks, the interlocutor stated the concept of ‘shared sovereignty’ with the expansion of the State List to accommodate the uniqueness of Naga society.

The Naga representatives, on the other hand, articulated a ‘federal relationship’ with the Indian Union with additional financial and legislative powers. Efforts of the Church-led Forum for Naga Reconciliation has also seen a significant decline in factional clashes among the Naga groups in recent years. These are indicative of some convergence of the opposing stances and may be the beginning of the conflict resolution.

The handling of insurgencies by the country, and especially the Naga insurgency, has followed a pattern of ‘military pacification’ followed by ‘political purchase’. This expedient has helped control the situation in the short-term but has not ensured a long-term solution. A clear, firm, comprehensive and innovative approach is required for resolving the conflicting and divergent stands for achieving any final or lasting solution. Experience indicates that fracturing the dissident (militant) elements made good tactical sense for dealing with them militarily; however, unity is essential for strategic purposes for a lasting settlement. Any group or faction left out will invariably brand the others as traitors and resume hostilities. Bringing the IM and K factions along with the FGN/NNC to a common agreement is, therefore, imperative.

Ironically, Isac Swu had journeyed from a refusal to step on Indian soil to passing away in the Indian capital.

The views expressed are of the author’s alone. This article was originally published on The Indian Defence Review and has been republished here with permission.

Get Swarajya in your inbox everyday. Subscribe here.
Tags:
6 Shares