Industrialise, Urbanise, And Hindutva Wins – Like It Did In Gujarat 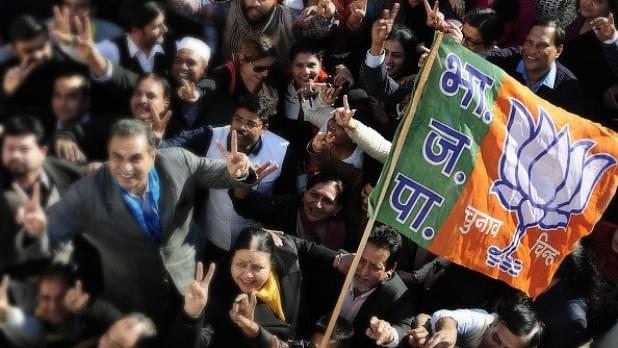 The BJP party workers celebrate the victory of the party in Gujarat and Himachal Pradesh at the party office in Chandigarh. (Keshav Singh/Hindustan Times)

The recently concluded Gujarat election is an important moment in the political history of modern India. It is important because of two reasons.

First, it proved the resilience of the Gujarat model in the face of unprecedented odds. That even when faced with the economic shocks of demonetisation, goods and services tax (GST) and agrarian distress, in addition to anti-incumbency of 22 years, revolt by the dominant castes, revival of the opposition and lack of any local leader in the post-Modi era, the Bharatiya Janata Party (BJP) still sailed through with around 50 per cent of votes, and this is not a small achievement.

Second, it also marks the revival of the opposition challenge to the BJP. The Congress party was able to give a tough fight to the BJP using a complex strategy, which relied heavily on its tried-and-tested model dating back to the Nehruvian era.

The Gujarat model was able to deliver the 10 per cent state gross domestic product (SGDP) growth rate from 2001-2013 and even in the period of 2012-17 when growth rate fell across the board. But it must be emphasised repeatedly that the core of the Gujarat model is Hindutva. It is easy to forget that the Congress era was of the ‘gunda-raj and danga-raj’ when the entire state politics revolved around opportunistic caste calculations. The ‘Baahubalis’ of various castes were given political patronage in lieu of their support in vote mobilisation during the elections. Winning the elections revolved around allying with one or two Hindu castes and throwing in the Muslim votes in the mix and sailing through the elections. But this meant that the government was always at the mercy of the politicians and Baahubalis of these castes and communities, and it was next to impossible to crack down on crime and corruption without jeopardising one’s chances at the next elections.

But the Gujarat model was built upon a United Spectrum of the Hindu Votes (USHV), which liberated the government from the opportunistic caste calculations of the old Gujarat. Now no caste or community could blackmail the government – pressurise yes, and up to a point, but not blackmail. This gave the government more room to manoeuvre and focus on economic and administrative reforms. More importantly, it enabled the state to crack down on the organised mafia and criminal activities, which directly resulted in a better business environment in the state.

Much time is wasted on the debate over Hindutva versus development. But they are two sides of the same coin as far as Hindutva enables the creation of a strong state and gives the government the capacity to call the bluff of any caste, no matter how powerful and influential. But this Hindutva-based model is not without its weakness. For all the talk of Hindu unity, the deep fault lines of caste still exist as no systematic attempt was made by the ruling dispensation to go beyond surface adjustment.

For all the political power the BJP enjoys, it, like all other political parties, has failed to take up the caste issues. Even the “one well, one temple and one crematorium” drive by the Rashtriya Swayamsevak Sangh (RSS) is too late and has failed to entice an enthusiastic response from the BJP. And we have just seen how caste is the nemesis of Hindutva politics. The strategy of pitting the Patels, other backward class (OBC) and Dalits against the BJP saw the party reeling under pressure. But that it was still able to tide over this challenge shows that its Hindutva core is still strong, but for how long in the absence of clear policies to strengthen it?

And it is here that the Congress has learnt its biggest lesson from the Gujarat elections. It has adopted the policy of instigating the socially and economically dominant castes in every region on the basis of real and imagined grievances. So, Jats in Haryana and western Uttar Pradesh, Marathas in Maharashtra, Lingayats in Karnataka, Patels in Gujarat are all on the streets due to one reason or the other, apparently on an apolitical platform. Now as the Rajasthan elections approach, we can expect similar unrest among the Rajput community. Already the community is on the boil over the movie Padmavati and the killing of gangster Anandpal in a police encounter, transforming him into an icon of the community overnight.

In fact, the Congress is going back to its Nehruvian roots to try and recreate the old model. The Congress was always the party of the urban elite upper-caste, especially the patrician Brahmins, who maintained their power on the basis of an alliance with the local dominant communities. These dominant communities wielded and continue to wield tremendous social and economic power. And it was they who ensured electoral victories for the dynasty in return for political fiefdoms at the local level and immunity from the state power. The Nehruvian model worked by blocking the socio-economic mobility of the subaltern castes at the altar of the local power structure, who were either not even allowed to vote, especially the Dalits, or voted as they were told to. Throw in a bit of booth capturing and you have the foundations of the good old days when ‘Idea of India’ reigned supreme.

Here, it must be remembered that it was not the BJP which directly confronted and defeated the old Congress model, which was brought down by the OBC and Dalit politics in the eighties and nineties. In fact, a large part of the rise of the BJP was possible because of these socio-political upsurge of the subaltern castes. What the BJP defeated was an already weakened Congress party grappling in the dark after the Sonia presidency managed to antagonise virtually all its constituencies. Therefore, how the BJP will meet the resurgent Congress in the coming days will be a big challenge as most OBC satraps are already allied to the Congress and the party is aggressively trying to woo the Dalits back to its fold by co-opting various local Dalit movements and unrests like Una agitations or that centred around the suicide of Rohith Vemula. That Congress wants to revive its old model has brought India precariously close to a real ‘social counter-revolution’.

Another important lesson is that the BJP performed far better in the urban areas and poorly in the rural areas. This must end the fetish of the right-wing with the agrarian order and, instead, put its full weight behind urban-industrialisation. Hindutva politicians and those professing loyalty to the right wing must know that the rise of a ‘Hindu nation’ and rise of an industrial-urban India are inseparable. One is not possible without the other. Hindutva works well in the urban regions as caste divisions dilute significantly and not in the countryside. But it is strange that in the name of conservative thought in India, what we have is an orthodoxy born out of the feudal elements of the countryside, who have come to dominate the right-wing political formations as well.

The BJP must break this jinx and fully align itself with the aspirations of the youth of faster economic growth, urbanisation and modernity. That ‘real India lives in villages’ is nothing but a statement of our failure to industrialise even after seven decades of Independence. It is nothing to be proud of. This is not to say that the farmers and rural areas must be ignored. In fact, this is where the real challenge will come from in 2019. And anyway, for faster economic growth, a strong and vibrant agrarian sector is an absolute must. But the long-term strategy should be to move more and more people out of the rural sector into the modern manufacturing and urban sector.

And the third important point is about the issue of job creation. While the job scenario is not as bad as it is believed, in politics, perceptions matter. Anyway, the more important issue is the availability of well-paying, stable jobs. While it is true that technological disruptions and economic restructuring are creating havoc in the job market and the standard 9-5 jobs are disappearing worldwide, the government can’t surrender its responsibility. There is still a lot of scope in India for the growth of the manufacturing sector, especially in small-scale enterprises, tourism etc, which have a direct impact on job creation. While promoting entrepreneurship and self-employment via various schemes launched recently are beginning to have some impact, the government must understand that there are lakhs of people who are not equipped to be part of the start-up ecosystem and are, perhaps, searching for a simple job of a peon.

After Gujarat, it must be clear that talking only about entrepreneurship and launching one more app is not the way forward. Some direct work is needed. There are thousands of posts lying vacant in the government and public sector like, for instance, the Delhi University has around 9,000 faculty positions waiting to be filled. There are many more at the state level. What the government can do is to fill these posts on a warpath, including a large number of backlog seats for the Scheduled Castes and Scheduled Tribes and OBCs, which will be enough to change the public perception of an impending doom on the jobs front. Plus, it will take away the thunder of the right wing being anti-Dalit and anti-social justice.

In short, the Gujarat elections have signalled the long run towards the 2019 general elections, which will see a direct battle between the Hindutva model and the Congress model, and much will be at stake.

Will Hindutva hold like it did in Gujarat or will it crumble due to multiple assaults spearheaded by explicit caste politics? Time will tell.