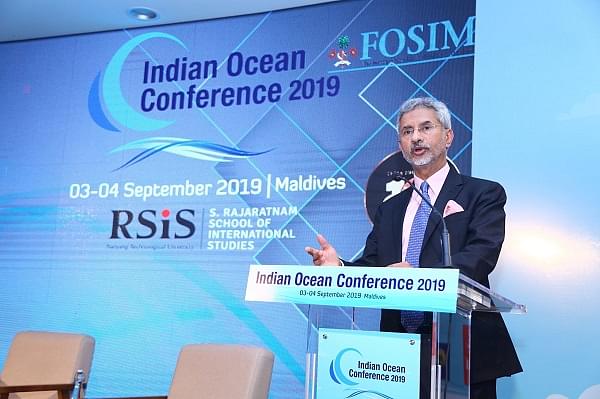 A grand conglomeration of 56 distinguished speakers from 36 different countries deliberated through 14 power packed sessions, on a common denominator – the Indian Ocean.

The fourth Indian Ocean Conference held at the picturesque island-nation of Maldives on 3-4 September 2019, organised by India Foundation in collaboration with the Foreign Service Institute of Maldives (FOSIM) and Rajaratnam School of International Studies, Singapore, bespoke of the growing importance of this geographical entity in the geostrategic power play of the world.

The entire credit for taking the conference and the concept of Indian Ocean Region to the next level goes to the ‘do-tank’ India Foundation that believes in applied research as a enabler to sound policy formulation.

Its staple of four thematic conferences held in a calendar year, bring in the best brains from across the globe to discuss and deliberate threadbare the various dimensions of the designated theme in a manner so as to arrive at actionable conclusions that can be translated into concrete policies.

For a discerning mind, it wouldn’t come as a surprise as to why the Indian Ocean is gaining importance by the day.

Covering one-fifth of the geographical expanse of planet earth, and a humungous population of approximately 2.5 billion, which is a third of the world’s population; situated between two of the most important and busiest choke points, the Straits of Hormuz and Malacca, from where 90 per cent of the bulk cargo passes, more than a 100,000 ships ply, it is but natural to be the cynosure of all global powers that desperately seek to have their presence in the region.

For a student of the Indo-Pacific like me, there were three key takeaways from the conference.

At the heart of the Indian Ocean Conference, organised on the lines of the UN General Assembly, were six high-impact issues that came in the form of 3 Ss and 3 Es namely: Security, Stability and Sustenance, and Economy, Ecology and Energy. Some of the other important issues that were flagged were: marine pollution in the form of ocean acidification and desertification.

The USP was that even countries such as Seychelles and Papua New Guinea had their say on an equal footing. The Chinese representative at the conference had to face a lot of flak from various quarters for their aggressive posture in the region.

A verbal duel between the US and Chinese representatives was witnessed, reflecting the growing fissures between the two countries.

The American camp ably led by Ambassador Harry Harris, insisted on a ‘free and open’ Indo-Pacific, at the heart of which lies the Indian Ocean Region, which should be a rule-based peaceful zone, to which the Chinese Foreign Ministry representative Wei Hongtian, read out a pre-emptive written response, raising the temperature of the otherwise peaceful discussion.

The emerging Great Power rivalry in the region only reiterated the need for the real stakeholders in the region to come together as maritime security is largely an ‘inclusive security’ concept.

No single country, however big and powerful it may be, can have a hegemonic control of this. A new, out-of-the box egalitarian order needs to be evolved, at the earliest. This was the first major takeaway of the conference.

Though there were many luminaries and experts who made their mark, it was the comeback man, Mohamed Nasheed, Speaker of the Peoples’ Majlis of Maldives, who stole the show with his courage and conviction in nailing the key concerns, plaguing all the countries of the Indian Ocean Region at large and Maldives in particular.

China’s commercial Vanity Fair – they way China grabs territory faster than the East India Company did, that too without firing a single bullet – is the first threat he identified.

The way China is trapping small island countries of the region in a deadly debt trap and eventually unfolding neo-colonial tendencies, could not have been highlighted better.

The growing threat of Islamic radicalism to the region and creation of a ‘deep State’ by ISIS-like elements that has penetrated the top military, bureaucratic and political establishment, is the second threat identified by Nasheed.

Many so-called ‘liberal-secular’ advocated may not find this acceptable, but coming from a leader like Nasheed who has faced the brunt of this dangerous phenomenon, is a point to ponder for everyone.

Even the chair of the session, M J Akbar, seconded this and termed it as the ‘romance of regression’. Climate change and brazen industrial fishing are the other two threats identified by him.

Maldives is facing the biggest challenge in the form of climate change and they are most vocal about this existential danger. All the dignitaries from Maldives who took to the podium mentioned this without mincing words.

They stated that a degree change in temperature to the world could mean the disappearance of their country from the global map, to them. That is the gravity of the situation.

No wonder I did not find a single plastic bottle in use on the island nor any kind of non-degradable litter. Even for public transport, electric vehicles are used in large numbers. Conservation of ecology is not a way of life for Maldivians, it is life itself.

The biggest takeaway for me was the manner in which the Indian Ocean was brought back to the consciousness of the Indian delegation. With a coastline of more than 7,500 km, maritime security is at the heart of the political, military, economic and strategic concerns for India.

This was duly recognised and appreciated by most of the leaders attending the conference. The fearlessly outspoken Nasheed, brought on record the traditional role of India as the ‘first responder’ in times of crisis, bestowing upon it the ‘policing’ rights as the ‘natural custodian’ of the Indian Ocean and its vast resources.

India never tried to colonise or exploit others while playing this role, was the significant point worth noting.

To conclude, the ‘Idea of India’ is always defined with reference to the mighty Himalayas in the north and the Indian Ocean in the south.

The Indian engagement - commercial, cultural and strategic - dates back to thousands of years of engagement with the Indian Ocean known as the ‘Sindh Mahasagar’ in ancient scriptures and later as ‘Hind Mahasagar’ in modern times.

Our very notion of nationhood and national unity has these two natural frontiers embedded deeply in our sub-conscious mind. It is only during the Mughal period that we developed ‘sea-blindness’, and after Independence, with Delhi-centricism, we assumed that it was due to European colonisation that we got a sense of being a naval power.

Ironically, even the British saw India as the natural successors and custodian of the Indian Ocean, as evident from the writings of Lord Mountbatten, who himself was a decorated naval commander.

Unfortunately, despite being surrounded by water on all three sides, neither our policy makers nor we, as a society and people, tried to regain our consciousness regarding the waters either of Mahodadhi (Bay of Bengal), Sindh Sagar (Arabian Sea) or Sindh Mahasagar (Indian Ocean).

The Act East Policy and usage of the term ‘Indo-Pacific’ instead of ‘Asia-Pacific’ by Modi government significantly transformed this trajectory. The mileage we received for his policy of SAGAR (Security and Growth for All in the Region) is an example of the potential we have in the region.

Going beyond this, the need to introduce Mahasagar and Maritime to students early in life is the most important takeaway for me at this conference.

Urgency to regain oceanic consciousness, both in scholarship and strategy, in order to prepare ourselves to play a meaningful role in this new centre of gravity, which will pull nations - large and small - into its vortex, for multiple reasons mentioned above, is the need of the hour.

This intellectual initiative of ‘do-tank’ India Foundation has made us realise there is no opportune time for this than now.

Aayushi Ketkar is a faculty of International Relations at the Gautam Buddha University and co-editor of a recently published book on the geopolitics of the Himalayas.