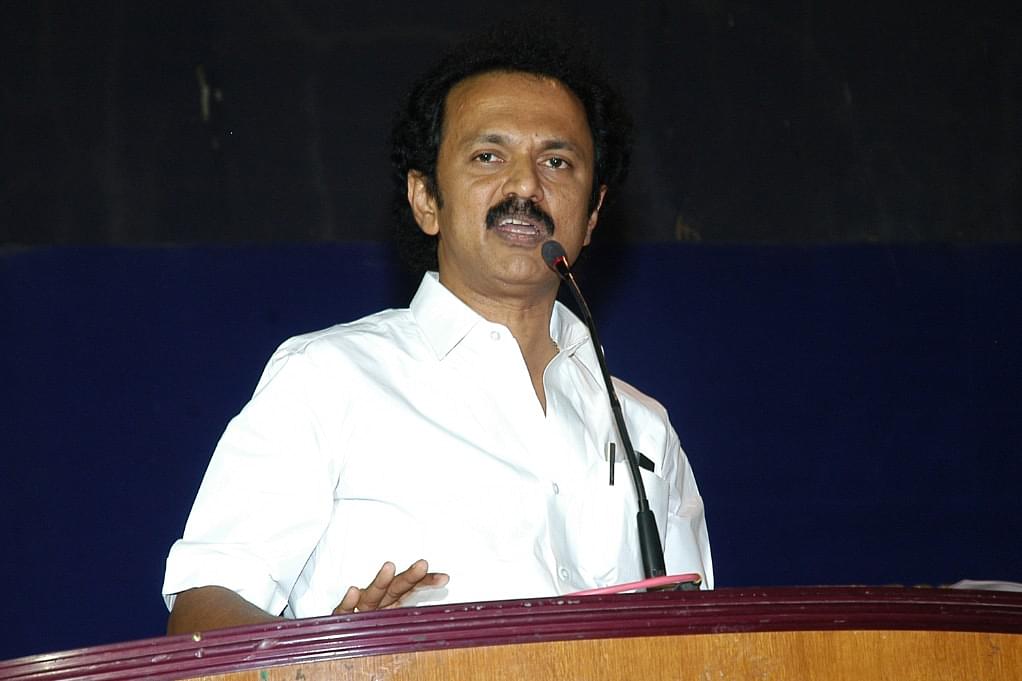 Is Dravida Munnetra Kazhagam (DMK) president M K Stalin making a series of errors that is eroding his party’s base in Tamil Nadu? Looks so, going by the comments on some of his recent decisions and moves.

One of his recent decisions has made his ground slippery and, probably, lent credence to Bharatiya Janata Party (BJP) national secretary H Raja’s charge against the Tamil Nadu Hindu Religious and Charitable Endowments (HRCE) Department employees. The department came into existence to take care of Hindu temples, and what happens when you remove the word 'Hindu' from HRCE? Sounds absurd?

But this is what Stalin insisted on to take part in a protest organised by the HRCE Department employees against H Raja on 27 September at Valluvar Kottam in Chennai. Not just the word 'Hindu' was removed from the department’s name, but the stage for the protest saw atheists, and those who constantly run down the Hindu religion, take part.

Political observers feel that Stalin’s folly has resulted in the public now realising that perhaps there is some truth in Raja’s charges against the HRCE Department. Recent actions by the Tamil Nadu police idol wing have added to the discomfiture of the HRCE employees, while giving credence to Raja’s claims against them.

The DMK leader followed up with two more acts that showed him in poor light. First, a senior party legislator paid a visit on actor-turned-politician S Karunaas at a city hospital on 4 October. Karunaas, who runs a caste outfit, was arrested on 23 September by Tamil Nadu police for his offensive remarks against state Chief Minister Edappadi K Palaniswami during a speech. On 30 September, he was released on bail. On 11 October, Karunaas called on Stalin at his residence, further drawing criticism.

Second, on 4 October, Stalin called on May 17 organisation coordinator Thirumurugan Gandhi at a private hospital where the latter is undergoing treatment for various ailments. Gandhi was arrested on 9 August on charges of sedition, while he is also accused of being behind protests demanding closure of Thoothukudi Sterlite Plant and opposing the Salem-Chennai green expressway corridor. (May 17 is the day when Velupillai Prabhakaran, Liberation Tigers of Tamil Eelam founder, was killed by the Sri Lankan Army, and the organisation’s objective is a separate Tamil nation. May 17 has also been accused of hijacking the jallikattu protests in Tamil Nadu in January 2016 resulting in violence that forced police to use force to disperse protesters.)

“Would Kalaignar Karunanidhi (the late DMK patriarch) have met Karunaas or Gandhi? What a climbdown for DMK!” wonders Raja, who has criticised the meetings at various press meets.

A political observer says that “the late Karunanidhi wouldn’t have done such a thing (meeting Karunaas and Gandhi), at least openly. He had a stature and certain principles for the DMK. The meeting of Karunaas or calling on Gandhi are way below the standards that DMK is known for,” he regrets.

DMK cadre themselves are upset that the party is clueless and directionless. “Stalin is attending anything and everything. He wants to catch the public eye but it is damaging the party,” says a north Chennai cadre, adding that the DMK president is being misled. The needle of suspicion on Stalin’s wrong strategy points to a “kitchen cabinet” that includes his wife, son-in-law and a handpicked team.

The “kitchen cabinet” has resulted in the alienation of senior leaders in the party. Some senior leaders regret that their voices are no more heard and they are being sidelined. Some have decided to simply fade to the backstage and probably quit politics.

One view of party cadre and observers is that DMK was never clueless under the late Karunanidhi. Had he been active in January 2016 when trouble broke out within All India Anna Dravida Munnetra Kazhagam (AIADMK), he would have turned the situation in his favour, they say. The AIADMK is still riven by factionalism but DMK isn’t just able to manoeuvre to wrest control.

Stalin was given two choices in early 2016. One was to get in touch with the disappointed AIADMK legislators and pay them off to resign from the state assembly. The party, however, was not ready to either take the risk or spend money that would have made them poorer by some Rs 80-100 crore.

Second was for DMK legislators themselves to resign en masse and force some sort of mini elections. The second faced stiff opposition from many senior party leaders as some of them weren’t sure of their own prospects. Moreover, some feared that they could soon be under scrutiny for some of their actions during their 2006-2011 party rule.

As a result, the DMK has lost much of its ground and recent actions have only put the party on the backfoot. The party’s silence on issues like the rape of a nun by a bishop in Kerala or charges of sexual misconduct against its ardent supporter and lyricist Vairamuthu hasn’t helped it either.

On top of it, the party welcomed the Supreme Court ruling on Sabarimala which exposed its hypocrisy since it opposed the ruling on triple talaq. The support of the church for the DMK is seen as too close for comfort. The party failed to say anything on a statement by Christian preacher Mohan Lazarus that Hindu temples are satan strongholds.

Many have also noted the fact that neither Stalin nor his party wished the people on the eve of Ganesh Chathurthi. DMK and the late Karunanidhi have always been seen greeting Muslims and Christians for their festivals. On the other hand, Hindu festivals have never got a mention from the party or its leaders. With some sort of Hindu consolidation setting in and the social media exposing its double game, the party is at the receiving end on this count too.

“DMK is rudderless, clueless and has lost direction. If you go and see in the rural areas, you will find that no one is willing to vote for Stalin. Not that the people like AIADMK but they are all looking for a better option. That option may be in the form of a new party or alliance that could be formed soon,” says a veteran Dravidian leader.

In this regard, even Amma Makkal Munnetra Kazhagam and its leader T T V Dinakaran could gain some space in Tamil Nadu politics since he has been making the right noises. “He might not have great leaders with him but the AIADMK cadres need someone to guide them. T T V Dinakaran could provide that,” the leader says.

In an interview to a television channel, Makkal Needhi Maiam founder and actor Kamal Haasan said his information was that the Congress could break its alliance with the DMK and in that case, his party could have an alliance with the national party.

Kamal Haasan may be making irrelevant statements but he has been meeting the masses. It could help him feel the pulse of the electorate. Probably, he is already aware that the DMK is headed nowhere, and Stalin’s recent moves are only compounding the party’s woes.