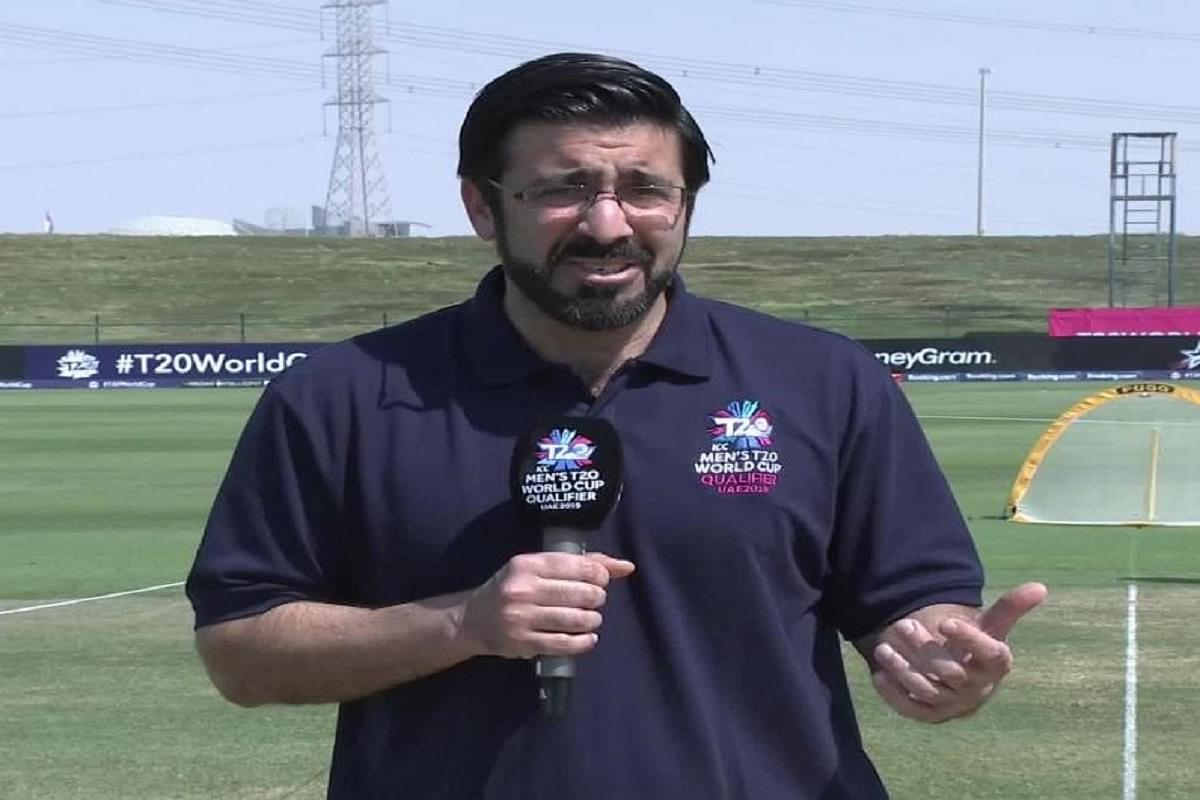 This was in 1300 AD. (Arabic word Kufr means refusal to accept the commands bestowed by Allah and shown by his messenger Muhammad, as per Islamic belief.)

When it triggered outrage, many jumped in Khan’s defence, demanding the phrase be taken metaphorically and not literally.

The phrase meant “end of bad luck”, they insisted.

The phrase was inspired by a poem penned by an Indian Urdu poet belonging to Hindu community and thus had nothing to do with any religion, they argued.

Much to their disappointment, all attempts to absolve Khan of communal hate speech fizzled out as one prominent Pakistani after another put their Hindu hate out on public display.

Pakistan’s Interior Minister Sheikh Rasheed Ahmed called the Pakistan team’s win as “victory of the Islamic world (awaam-e-Islam ki fateh)”. Minutes before the match began, he had told the media that the Pakistani team was playing in solidarity with Indian Muslims.

During a post-match analysis on a prominent news channel in Pakistan, former cricketer Waqar Younis said that Mohammed Rizwan reading namaz on the field amid Hindus was his favourite part of the game (“सबसे अच्छी बात, रिजवान ने जो किया, माशाअल्लाह, उसने हिंदुओं के बीच जमीन पर नमाज अदा की. That was very special for me”).

Soon, skeletons began tumbling out and social media was filled with India and Hindu-hate speech by several Pakistani cricketers made in recent past.

Sohail Tanvir was heard discussing and berating the Hindu mentality with a news presenter (“Hinduon ke zeheniyat hi aisi hai”). The news presenter said that Tanvir should have known that Hindus are known for stabbing in the back.

Shoaib Akhtar was seen asserting his faith in Ghazwa-e-Hind (an Islamic concept of a faith-driven war where the entire Indian subcontinent would be converted to Islam) as well as the “two-nation theory”.

Saqlain Mushtaq was seen preaching to a large audience that anybody who doesn’t follow Islam will burn in the hellfire forever and that converting to Islam doubles a player’s batting average (in cricket, batting average means the total number of runs scored divided by the number of times the player has been out).

Inzamam-ul-Haq was seen boasting about converting many in the England team to Islam, and lamenting a failed attempt on Indian player Harbhajan Singh.

Unless one has a pattern-recognition disability or suffers from the Ostrich syndrome or intends to put wool over others’ eyes, one can easily see that Bazid Khan’s comment was only as much “figurative” as azadi slogans in the Jawaharlal Nehru University campus in 2016 meant “bhukhmari se azadi” (freedom from hunger) as claimed.

Still, here is our rebuttal for every attempt made to rob the phrase used by Bazid Khan of its communal undertones.

Claim 1: “Kufr toota is a metaphor. Your Islamophobia won't let you go beyond the literal meanings.” (Link here).

Our comment: As per all major translations of the Quran today, the word ‘kaafir’ (one who commits Kufr) means ‘sinner of the worst kind’. These translations show rejection of Islam, Quran, or Prophet as a most heinous crime, the punishment for which is to burn forever in fire of hell.

The word has been accepted to be worse than racist slurs that are banned across the globe and has been banned in several countries that have faced its implications.

Historic narratives from Muhammad bin Qasim till the last sultan are profusely filled with the word kaafir used for Hindus with a sense of disgust and hate.

In 2009, the Jamiat Ulema-e-Hind, a religio-educational organisation with considerable hold over the Deoband seminary, said that Muslims must not use the term kaafir for non-Muslims. This was in response to a demand made by then Vishwa Hindu Parishad chief Ashok Singhal.

So, when the centuries-old idea that ‘Kufr is sin’, ‘Kufr must be destroyed’ and ‘Kaafir is the worst of all creatures’ is not just alive but flourishing in the Indian subcontinent, what reasons do non-Muslims like us have to take it as a metaphor?

When wildly popular Islamic preachers of this era such as Zakir Naik or Tariq Jameel routinely speak of Muslims’ ‘ordained duty’ of destroying Kufr, why should non-Muslims like us not take it literally?

When a Bharat Yadav is lynched by a mob with slurs of ‘kaafir’ on the streets of Mathura, ironically believed to be the birthplace of Hindu deity Krishna, or when Muslim mobs chant it while targetting Hindus during communal riots in the national capital, why should non-Muslims like us not be alarmed by it?

On what basis are we expected to ignore the bloodied history as well as continued bloodshed associated with the word?

If you are attempting to brand us “Islamophobic” for not taking it “metaphorically”, it’s because the narrative of Islamophobia has obfuscation of truth as its core aim.

Claim 2: “Kufr toota aakhir khuda khuda kar ke" line is from a famous poem by a Hindu poet, Pandit Daya Shankar Naseem. It does not mean what you think it means.” (Link here).

Our comment: A hate phrase coined by a person with a Hindu surname does not cease to be hateful. If you believe it to be so, where is your support to Muslims accused or killed for ‘blaspheming’ Muhammad?

We dug a bit into the life and works of the said poet — Pandit Daya Shankar Kaul ‘Naseem’ — about whom information is scarce on the Internet and who is said to have been born 200 years ago.

We found on this website that once, a fellow Urdu poet, “jealous” of Kaul’s talent in Urdu poetry, asked him to complete a couplet by adding a second line to it.

The line by Kaul seems anything but glorification of destruction of a temple. What reason then do we have to jump to the conclusion that Kaul was glorifying “destruction of Kufr” and not criticising it?

It‘s highly likely that Kaul wrote the line as a condemnation of the atrocities carried out in the name of destroying sin (Kufr).

Claim 3: “Section of Indian media just doing sensationalism, Bazid Khan words "Kufr Tota" is a Urdu Idiom & nothing to do with any Religious issue. HAVE SOME SHAME.” (Link here).

Our comment: There is another K word that is used for a person or group that cuts votes in elections. But when it was used by a leader from the Nehru-Gandhi family, his speech was made to undergo forensic tests to prove that he had added the disclaimer of “vote” and did not refer to the Muslim community.

Why then should we believe ‘kaafir’ as not referring to the Hindu community unless the one who spoke the word did not give a clear disclaimer? The said K-word does not even have a historic record of derogatory use for a religious community. The word kaafir, on the other hand, has a clear consensus among scholars that it’s meant for Hindus and idol-worshippers in the Indian subcontinent.

A bigger question is why such double-meaning words are used for denoting ‘bad luck’ in a country, the genesis of which lies in its people’s refusal to co-exist with Hindus?

Why are such words and phrases acceptable, when they are used by criminals and terrorists to perpetuate hate crimes?

Alas, this is not the case at all.

When a Hindu man named Prem Chand died in a plane crash in Islamabad a decade ago, authorities in Pakistan painted the word ‘kaafir’ on his coffin in glaring red.

Schools run by Pakistan government and army teach students that Hindus are kaafirs and liable for death for no reason.

Pakistani movie superstar Shaan Shahid, one of the highest-paid actors in the country, has acted in and produced several films against India and Hindus, featuring songs about destruction of Kufr.

When construction of a Hindu temple began in Pakistan with partial government funding, the public destroyed it saying it’s ‘shirk’ (equivalent of Kufr).

When a top Pakistani minister wanted to send a message to arch-rival India after India’s surgical strike post Pulwama, he warned that “bells will cease to ring in the temples in India”.

When another top Pakistani minister wanted to similarly send a message to India, he called Indians “gaumutra drinkers” and declared that Indians do not have the flag of Islam and are thus inferior.

These are his exact words (translated by Swarajya): “O cow urine drinkers, we are Muslims. We are under the banner of valour of the likes of Maula Ali's and Shaheed-e-Karbala Hussein Ibn-e-Sali, you are not. Don't live in the belief that you are seven times our size as you don't have what we do. O idol worshippers, you cannot have the valour we do.”

Why do Urdu idioms and proverbs have build-in hate speech against anybody who doesn’t believe in the tenets of Islam? Why have Urdu poets and connoisseurs done nothing to clean the language of its hate slurs if they insist the language has nothing to do with religion?

A small but not irrelevant detail in this controversy is also that Bazid Khan himself has not clarified on the use of his phrase.