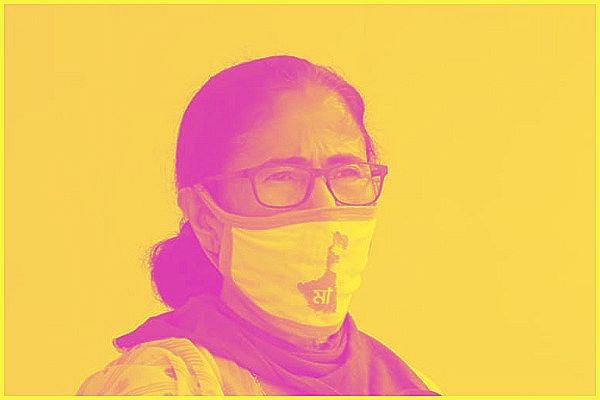 What was an otherwise well-organised event to mark the 125th birth anniversary of Netaji Subhas Chandra Bose on the eastern lawns of Kolkata’s iconic Victoria Memorial on Saturday afternoon was interupted by some among the invited guests raising ‘Jai Shr Ram’ slogans as soon as Bengal Chief Minister Mamata Banerjee was invited to speak.

Some have said that raising such slogans at such an event was uncalled for and bordered on ruffianism, more so when the Prime Minister, the state Governor and the Chief Minister and other dignitaries were present.

The slogans were clearly meant to provoke Mamata Banerjee who has, in the past, reacted angrily and in a puerile manner when faced with Jai Shri Ram chants. The most infamous of such incidents occurred in full public view (watch this) in end-May 2019.

However, Banerjee also reacted in an intemperate on stage by implying that Prime Minister Modi was to blame for the behaviour of some in the crowd and then refusing to speak in protest.

The Bengal Chief Minister could have ignored the slogans, or could have silenced the sloganeers with a Jai Hind or a Netaji Zindabad. By flying off the handle, she only confirmed her intemperate nature.

But there is a larger issue at work here, and it is of Mamata Banerjee’s own making. In Bengal, since 2016, the Jai Shri Ram slogan has transgressed religious boundaries and has become an acutely political one.

And the Trinamool chief is to blame for that. In 2016, when the BJP and its affiliates started organising Ram Navami celebrations in Bengal, Banerjee was quick to order the state administration to obstruct the celebrations, especially the processions which are an integral part of Ram Navami rituals, through covert and overt means.

Acting at the behest of the chief minister, a pliant state administration denied permissions to the religious celebrations at many places. The administration also imposed strict restrictions on processions by curtailing their scale and even timings.

All that triggered allegations of Mamata Banerjee restricting or even banning (at some places) Ram Navami celebrations to appease her valuable Muslim vote bank.

The Jai Shri Ram slogan very soon became a cry of defiance against, in the view of many, an autocratic state administration that bends over backwards to appease Muslims on Mamata Banerjee’s instructions.

This perception strengthened after denial of permission by the Mamata Banerjee government to hold Saraswati Pujas in some schools and even Durga Pujas at some places, and restricting, curtailing and even denying permission to Hindu religious events.

However, religious events of Muslims were allowed to be observed in an unfettered manner. Naturally, this evoked angry allegations of Banerjee appeasing Muslims at the cost of sentiments of Hindus.

Faced with these allegations, Mamata Banerjee tried to impose other restrictions like not allowing participants in Ram Navami processions to carry ‘weapons’ (meaning the traditional tridents that are always carried).

That, too, triggered more anger and defiance. And, as tempers rose, the inevitable clashes and violence followed. In 2018, major communal clashes broke out in Raniganj over Ram Navami celebrations.

Realising that the BJP was gaining ground through Ram Navami celebrations, the Trinamool also started organised similar processions with even senior ministers participating in them.

But, by then, the narrative had been cast: that Mamata Banerjee tries to prevent Hindu religious celebrations in order to appease Muslims.

To Mamata Banerjee, the BJP was using Ram Navami celebrations to strengthen its hold on the state. And, hence, her anathema to Jai Shri Ram slogans.

While her charge that the saffron party was using Bhagwan Ram for political purposes may have had a grain of truth, what mattered in public perception was how she countered the BJP’s politicisation of Bhagwan Ram.

She reacted in an authoritarian and ham-handed manner and that only made matters worse for her. She could have tackled the issue with a lot of political finesse, but by not doing so, she created a lot of acrimony and triggered defiance.

What also made matters worse was the spurious narrative that the Trinamool and its advocates tried to spin about Bhagwan Ram being alien to Bengal. The objective of that was political: to portray Bhagwan Ram and His worshippers (the BJP) as ‘outsiders’.

Thus, the Jai Shri Ram slogans raised on the lawns of Victoria Memorial on Saturday afternoon were not merely religious slogans. They were cries of defiance and anger at Mamata Banerjee, her autocracy and her blatant Muslim appeasement.

Raising those slogans at that particular event were not in good taste and could have been avoided, but Mamata Banerjee has only herself to blame for hearing those slogans.