JNU Fracas: The Argument That Police Should Have Been Kept Out Is Rubbish 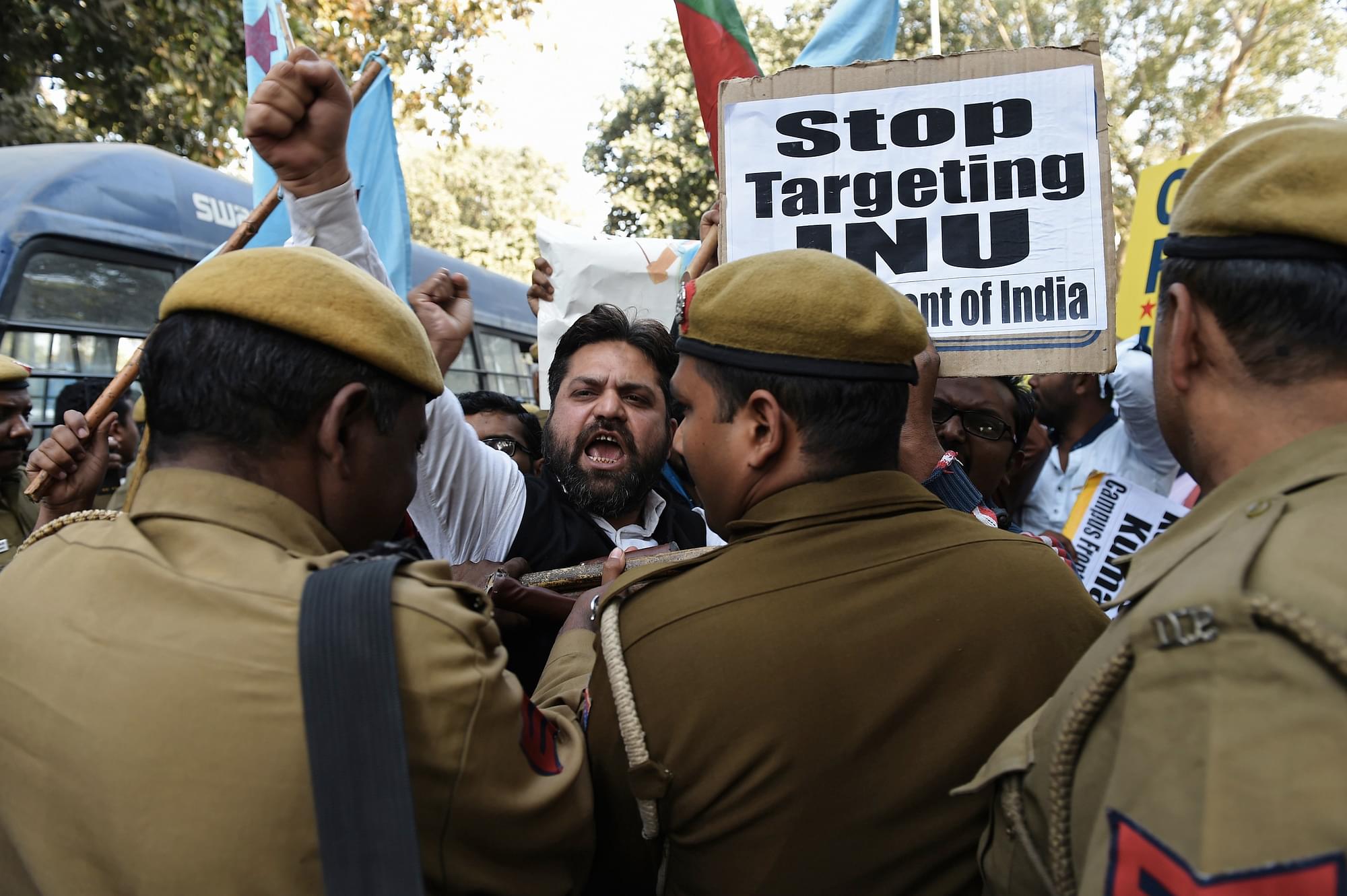 Indian students and activists shout slogans during a protest outside the office of the Indian Minister of Human Resource Development, Smriti Irani, against an attack on Jawaharlal Nehru University (JNU) students in New Delhi on February 16, 2016. A row over the arrest of an Indian student on a controversial sedition charge escalated Friday 15, with students refusing to attend classes and violent scenes at the Delhi court where he was due to appear. Kanhaiya Kumar was arrested on February 12 for alleged seditious behaviour at a rally to mark the third anniversary of a Kashmiri separatist's execution, sparking major protests at Delhi's prestigious Jawaharlal Nehru University (JNU) and other universities. He was brought before a judge on February 15, but violent scuffles broke out in the courtroom where fellow students and journalists had gathered to witness his appearance. AFP PHOTO / SAJJAD HUSSAIN / AFP / SAJJAD HUSSAIN (Photo credit should read SAJJAD HUSSAIN/AFP/Getty Images)

On some TV channels, the focus of debate on the anti-national sloganeering at an event organised within the Jawaharlal Nehru University, has shifted to whether or not the police should have been brought into the campus? With a leader of the students’ union now in policy custody, and several others under investigation, this question is no longer an academic one. With Leftists like Sitaram Yechury, and Congress politicians such as Sachin Pilot raising the same question, it is worth attempting an answer.

And the answer is yes, JNU is not a safe haven where the police have no role.

Let’s check the implicit assumptions being made by those who think otherwise.

The offence of sedition punishable under section 124A of the Indian Penal Code (IPC) is both cognisable and non-bailable. Whether this particular provision uses a sledgehammer to swat a fly or is otherwise draconian is not the subject matter of this article. The issue is: should the law enforcement agencies lay off merely because students, especially of the JNU, are involved in breaking the law, and hence they must be dealt with by the university administration?

If you are still inclined to think the police shouldn’t get involved, ask yourself: what if there is a charge of rape or murder inside the university campus? Would the argument asking the police to stay away work? If the answer is no, why is the crime of sedition – a crime against the nation – exempt from this logic? The law doesn’t vest a university administration with police powers or the powers of a criminal court. Neither does it grant immunity to universities and their students from the purview of criminal law.

A university that boasts of a blue-blooded lineage – or, for that matter, any other university – was never meant to be treated as an island immune from the normal application of the law.

Indeed, the police would have been remiss in its duties had they looked the other way despite knowing (or suspecting) that anti-national elements had infiltrated JNU either for once or permanently and systematically. Who knows what the police might in hindsight have been guilty of if they had allowed the matter to fester and stepped in late only when explicit anti-India rants came to be vented from the premises instead of intervening proactively. The Delhi police deserve credit for nipping possible violence and destruction that could have followed in the aftermath of the anti-India rant.

Allowing JNU to deal with incipient sedition – or civil disobedience, if you like –  would undermine our laws and cast tacit aspersions on our judicial system. Our courts have shown remarkable restraint in not using the full force of section 124A of the IPC even once and instead shown considerable latitude and indulgence to those who breach the lakshman rekha.

It is only a fair trial in court that can establish whether the anti-India rant was just an off-the-cuff outburst made on the spur of the moment or a well-planned rebellion against the state with funding coming from outfits like the LeT. Left to itself, the university administration would neither have the inclination nor the wherewithal to carry out a thorough investigation. Indeed, it may in all probability try to hush up things if only to protect the JNU brand name.

It should also be noted that juvenile law, warts and all, doesn’t apply to university students unless it turns out that some of them got admission through deceit – misdeclaration of age or forged birth certificates. And in any case, self-regulation (used in a broad sense) has never produced the best results for society. The doctors in the Medical Council of India (MCI) cling together clannishly, which is why the medical community is terribly cut up with the Parliament for making it possible to try doctors in consumer courts.

Therefore, the argument that young students must be let off with counselling or some such slap on the wrists by the university is absurd.

Discrimination in law on grounds of religion, profession pursued or age with regard to trial and punishment does not augur well for any country.  The Supreme Court set a bad precedent a few months ago when it bailed out Sushil Ansal, the Uphaar cinema fire accused, from serving a prison term in deference to his 80-plus age. The wily Ram Jethmalani then got the same exemption for Sushil’s 70-plus brother Gopal Ansal by invoking the principle of parity.

If students must be handled with kid gloves and given a treatment that is softer than the one given under the juvenile justice system and very senior citizens spared from imprisonment, then it follows that the full force of law can be applied only on the middle aged! What a travesty!