Jobs And Jallikattu: Why Youth Mutinies Are Careening Out Of Control 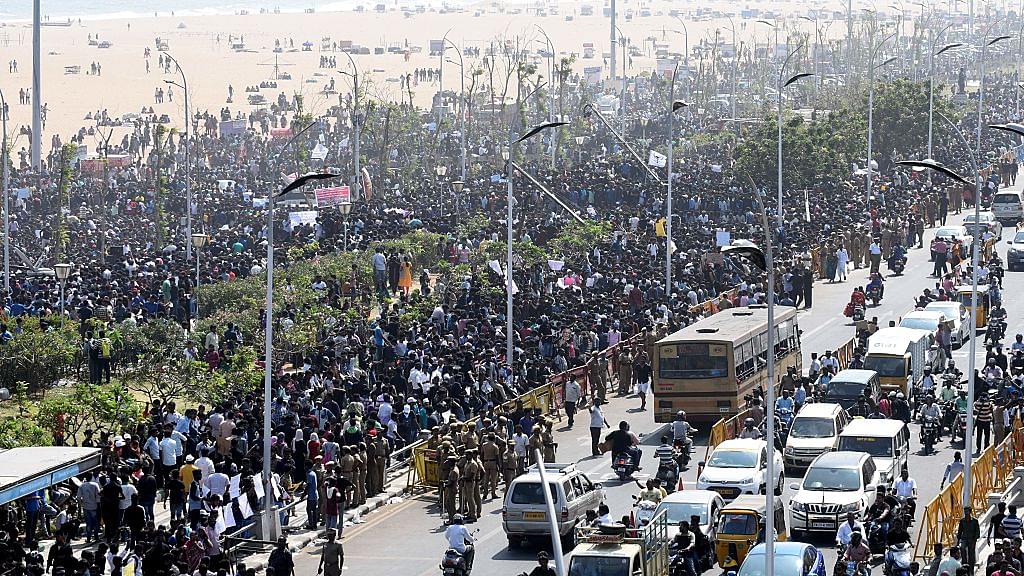 Protesters gather during a demonstration against the ban on jallikattu and calling for a ban on animal rights orgnisation PETA, at Marina Beach in Chennai. (ARUN SANKAR/AFP/GettyImages)

The violence in Tamil Nadu, which continued well after it was clear that the state government would pass a bill to enable jallikattu, a traditional bull-taming sport, demonstrates two things: one, there are too many malcontents and trouble-makers in society willing to resort to violence if given half a chance; and two, the growing cohort of unemployed youth is rapidly turning into a demographic disaster in the absence of fast jobs growth.

Somewhere between 2011-12 and now, India’s jobs machine ground to a near halt. An economy that was creating 7-8 million non-agricultural jobs between 1999-2000 and 2011-12 suddenly blew a fuse and stopped generating them in the numbers needed (12 million per annum is the annual increase in workforce). A Labour Bureau report of 2013-14 showed that barely six out of every 10 people in the working age population got year-round work. But – here’s the link to India’s youth-led mutinies – unemployment is highest for new or younger job market entrants, ranging from 10.2 per cent for 15-17 year-olds, 9.4 per cent for 18-29 year-olds, and less than 1 per cent for 30-plus adults. It is only in the 30s that the unemployment rate drops dramatically, says this op-ed in The Hindu.

Is it any wonder that Jats (Haryana), Marathas (Maharashtra), and Patidars (Gujarat) went on the rampage demanding reservations over the last one year? With agriculture increasingly getting mechanised, jobs have to be created in the non-agriculture sector, and this is where it is faltering. Youth unemployment may be part of the explanation for the stone-pelting mobs in Jammu and Kashmir, where jihadi terrorism has probably destroyed normal job-creating trades, leaving stone-throwing as the most viable paid occupation. This is also probably the case in West Bengal, where extortion by party cadres and illegal cross-border trade are major sources of income for unemployed youth. Little wonder, Mamata Banerjee was livid with demonetisation, robbing as it did her cadres and voter base of cash incomes.

When unemployment and underemployment among youth is the norm you are not going to find any shortage of protesters, whether for jallikattu or reservations or Cauvery waters. There are enough people with no jobs or hopes of jobs to make a fight of any issue.

India is thus sitting on a tinder-box of youth mutinies, and this is not going to taper down in the near future as growth is still anaemic and key factor markets – land and labour – are unreformed and unable to aid job creation. With automation and technology already making capital investment more rewarding than employment expansion, job elasticity is down to under 0.15 per cent, according to an HDFC Bank jobs report. This means for every 1 per cent rise in gross domestic product (GDP), jobs grow at 0.15 per cent. In a world with surplus capital and surplus labour, no prizes for guessing what entrepreneurs will prefer.

India’s political economy dilemmas can be summed up thus:

Given our political structure, there is not going to be easy consensus on reforms, especially land and labour reform. This means crucial reforms – privatisation, creation of a national agricultural market, revitalisation of the land market, real estate reform, labour reforms, etc – will come in a trickle, and sub-optimally. The problems will only accelerate as supply of labour rapidly exceed available jobs.

Given combative centre-state dynamics, states find it easy to blame the centre for economic problems, including the slow pace of job creation. Even in the jallikattu agitation, protesters managed to find an anti-centre angle, when the Modi government had nothing to do with the ban.

The current division of economic sovereignty between centre and states ensures that both of them can neutralise each other. If the centre speeds up environmental clearances, states can drag their feet on land purchases; if a state opts for land reforms, the centre can throw a spanner in the works.

Even worse is the division of financial powers between states and cities, which will be real engines of growth and jobs if allowed greater fiscal autonomy. But urban development departments are run by rural politicians, to the detriment of urban citizens and public infrastructure.

The only medium-term antidote to both political and economic is extraordinary decentralisation – both from centre to state, and further from state to cities and district administrations and panchayat bodies.

For this we must:

Two, more smaller states must be created (UP is ripe for splitting into four), and more powers given to dynamic city-states like Mumbai, Delhi, Bengaluru, Kolkata, Chennai, Ahmedabad and Hyderabad.

Three, creation of state-level supreme courts for cases inside these states to be decided at the local level. The jallikattu ban should never have gone to the Supreme Court; it should have been settled at the state high court, so that any public anger for or against it can be dealt with locally. By making it an issue for the Supreme Court and the centre, we needlessly prolonged an issue.

Four, the concurrent list should be abolished, and the powers largely remitted to states. The centre can create model laws for land, labour or environment, but states should make the final laws here. There is no need to bring the centre into issues involving environmental clearances, except for projects with a large footprint.

India is too big to be governed from Delhi or even the state capitals. It has to push power – both economic and political – downwards to allow for innovation and reform.

The current division of powers makes it easy for states to pass responsibility upwards even while retaining the power to slow things down for political reasons. Power and responsibility should go together.