Kamaraj: A Stalwart Who Was Let Down By His Own People 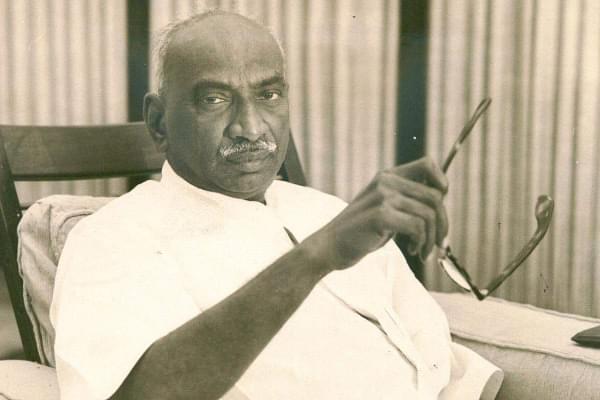 Whatever Tamil Nadu is today is because of this man of action.

The birth anniversary of Karmaveerar Kamaraj comes and goes every 15 July, with every political party, Congress not excluded, trying to arrogate to itself the great legacy of this southern legend of yesteryears. However, it is necessary for all of us to introspect on how this noble, selfless leader was treated by his own Congress party, when he was very much with us, in flesh and blood.

Kamaraj was born on 15 July 1903. Those who were active in politics during the fifties and sixties of the bygone century would know that a solid foundation for the progress of Tamil Nadu was laid during Kamaraj’s era, between 1953 and 1964. Be it sectors such as industry, irrigation, or education, Tamil Nadu was brought almost to the first slot in every field, thanks to Kamaraj. His self-confidence coupled with his extraordinary common sense enabled him to reap excellent results for the state, through his colleagues such as R Venkataraman, C Subramaniam and others. In fact, Kamaraj was a master in delegating work. Tamil Nadu would not have been in the forefront, ahead of even states such as Maharashtra, Karnataka and Kerala, but for Kamaraj.

When Kamaraj was at the peak of his glory, the ‘K’ plan was brought in. Prime Minister Jawaharlal Nehru was concerned about the steady erosion of the Congress party base, especially after the Chinese aggression in the northeast during November 1962. It was Kamaraj, who convinced Nehru that the party could be revamped and revitalised if senior Union ministers and a few important chief ministers resigned and undertook party work. To set an example, Kamaraj voluntarily resigned as chief minister on 2 October 1963. However, after being persuaded by Nehru, he accepted the onerous assignment as president of the Indian National Congress (INC) on 9 October 1963. It was a great day for the people from the south, when Kamaraj presided over the sixty-eighth session of the INC at Bhubaneshwar on 9 January 1964.

After the demise of Nehru, Kamaraj was instrumental in making Lal Bahadur Shastri the prime minister. In 1966, after the sudden death of Shastri in Tashkent, it was again Kamaraj, who was responsible for making Indira Gandhi the prime minister. Thereafter, Kamaraj earned the title of ‘King Maker’. This was the high point in his career. Thereafter, a steady run of disappointment and disillusionment set in for the stalwart.

Soon after Indira Gandhi became prime minister in January 1966, Kamaraj had to face his first experience in humiliation. This was when the rupee was devalued on 6 June 1966. Kamaraj came to know of this only through the media.

At that time, he was in Nagercoil. When the press sought his reactions, he simply said, “I was not consulted”, thereby, subtly expressing his disapproval of the devaluation of the rupee. When the press met Indira Gandhi with Kamaraj's reaction, without batting an eyelid, she replied: “Kamaraj is not an economist. The rupee has been devalued after the advice of experts in the economy”.

A day later, probably realising that she was hasty in her remarks, she sent her cabinet colleague C Subramaniam to meet Kamaraj and convince him on the ‘devaluation of the rupee’. Kamaraj, however, said he was not convinced. The immediate setback that the Indian economy suffered after the devaluation of the rupee proved that the robust commonsense of Kamaraj was right. However, his downward slide continued.

In the 1967 general elections, the Dravida Munnetra Kazhagam (DMK) headed by C N Annadurai stitched an alliance with C Rajagopalachari’s (Rajaji's) Swatantra Party, the two communist parties and a few others, and won a massive victory. Congress could only get 50 assembly seats. Kamaraj himself lost in his hometown, Virudhanagar, to a student leader. I was elected from Park Town Assembly Constituency from the Swatantra Party with the help of the DMK. I went to greet Anna in his home. I was expecting to meet a beaming and jubilant Anna, but I found him otherwise. When I asked him the reason, he gently took me aside and said, “if the voters of Tamil Nadu could defeat a stalwart like Kamaraj, who has done so much good to the state, how much time would it take for the electorate to do the same thing to us”. Not only that. Anna was particularly sad that the great benefactor of the state, Kamaraj, lost in his hometown.

After the setback for Kamaraj in Tamil Nadu, his clout with prime minister Indira Gandhi suffered a steep fall. Most of the decisions she took were unilateral, without consulting the All India Congress Committee (AICC) president. Indira Gandhi was also not in favour of a second term for Kamaraj. During a midnight meeting at her residence, Indira Gandhi persuaded S Nijalingappa of Mysore to accept nomination as president of the Congress party. Although Kamaraj was unhappy with the clandestine manner in which the whole exercise was done, he had to endorse the decision of her. Nijalingappa became the president of the Indian National Congress on 1 December 1967, replacing Kamaraj.

After the split in the Congress party in 1969, as Congress (I) and Congress (O), Kamaraj was with Congress (O), the opposite camp of Indira Gandhi. Though the rank and file were with Kamaraj, he found to his dismay that prominent leaders such as C Subramaniam, M Bhakthavatsalam and others deserted him and veered round to the Indira Gandhi camp.

During the hurriedly brought in general elections in 1971, Rajaji’s Swatantra Party aligned with Congress (O), while M K Karunanidhi’s DMK aligned with the Congress (I). Kamaraj decided to contest the Lok Sabha polls from Nagercoil. I contested as the Swatantra Party candidate, from Park Town Assembly constituency. The Nagercoil Parliamentary Constituency election was to take place a week later. After my election was over, I was asked to canvas for three days for Kamaraj, as he had to tour the rest of the state. When I went there, I was shocked to see the massive efforts put in by the ‘Congress stalwarts’ for the victory of the DMK candidate, with the sole object of defeating Kamaraj. In the end, while Kamaraj survived the onslaught, the rest of the 38 seats went in favour of Congress (I) and DMK. However, all the assembly seats were surrendered to the DMK by Indira Gandhi in her eagerness to make Karunanidhi as the Chief Minister, as against Kamaraj. Finally, Karunanidhi did become the chief minister with 176 MLAs in his kitty.

It is indeed farcical to see today's Congress leaders crying hoarse, decades after Kamaraj became immortal, that they want to usher in, ‘Kamaraj Rule’ in Tamil Nadu, while the very same Congress leaders including their high command from New Delhi, worked day and night in 1971 to bring in Karunanidhi as the chief minister, while Kamaraj was very much alive and was with us.

After the DMK split, M G Ramachandran (MGR) emerged as the leader of the Anna Dravida Munnetra Kazhagam (ADMK). The Dindigul by-election took place on 20 May 1973. While MGR scored a massive victory, Congress (I) had to bite the dust, failing to salvage even its deposit. Thereafter, due to the intervention of T T Krishnamachari, there was a brief period of ‘entente’ in 1974 between Indira Gandhi and Kamaraj during the Pondicherry state election and the Coimbatore West assembly by-election. Despite their coming together, MGR’s ADMK won in both the places. Thereafter, Kamaraj was no longer in the reckoning of Indira Gandhi, and thus became more isolated as more Congress leaders begun deserting him.

About a year later, on 25 June 1975, Emergency was declared. The entire press was gagged. When Kamaraj was addressing a public meeting at Tiruttani, he received the news of the clamping of Emergency. He publicly bemoaned that freedom was lost and said that henceforth, his speeches would not be reported even in the Congress (O) newspaper Navasakthi. The announcement of Emergency seems to have shattered the great freedom fighter, Kamaraj. Within hardly 100 days of the clamping of Emergency, this great stalwart, let down by his own people, prematurely left his mortal frame on 2 October 1975, on Gandhi Jayanti.