Karnataka 2018: Ten Reasons The State May Come Back To BJP 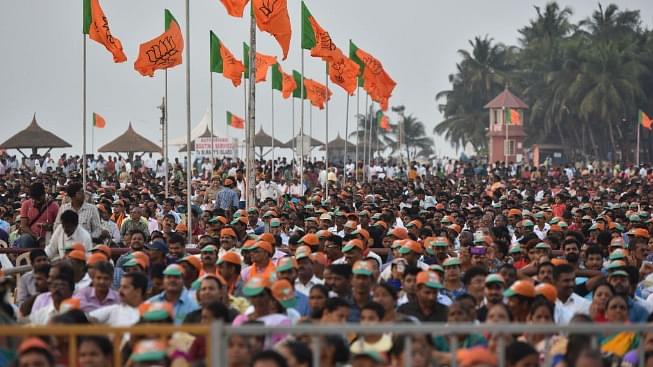 After the Uttar Pradesh and Bihar by-polls, where the Bharatiya Janata Party suffered setbacks, realpolitik now moves to the elections in Karnataka. These elections will set the tone for the elections to three states – Madhya Pradesh, Rajasthan and Chhattisgarh – slated to be held at the end of the year and the Lok Sabha elections to be held in Q1-Q2 2019. The triangular contest between the Congress, the BJP and the Janata Dal(Secular) (JDS)is being keenly watched. While the BJP was leading in 132 assembly segments in the 2014 Lok Sabha elections, a comfortable majority in a house of 224 seats, the Congress was leading in 77 and the JDS in 15.

While the Congress is again relying on AHINDA (Dalits, Backward Classes, Kurubas & Muslims) to bail out the party, BJP is banking on LIBRA (Lingayats and Brahmins) and JDS on Vokkaligas. While opinion polls predict a close contest, it appears that the BJP is slowly inching ahead in the campaign and that its chances have brightened.

Ten factors suggesting BJP is ahead in Karnataka

1. Historical trend of people of Karnataka voting out incumbent governments

The people of the state have exhibited a history of throwing out the ruling party. Since 1985, the state has never re-elected the incumbent. Power changes hands at the end of every five years in Karnataka, like in many states in the southern part of India. No chief minister has returned to power in Karnataka since Ramakrishna Hegde in 1985. From 1985 to 1999, power oscillated between the Janata Dal constituents and the Congress party. The trend was broken in 2004 when people gave a hung verdict. Congress managed to retain the Chief Minister’s chair with the support of JDS. In 2008, the BJP won the state for the first time, losing out to Congress in 2013.

Prime Minister Modi is very popular in Karnataka. The strong crowds thronging to listen to his speech is a testimony to this fact. I was on vacation to Coorg last Diwali and the driver of the cab I had taken addressed Modi as a ‘tiger – protector of Hindutva’, when we passed by one of his billboards. Forty-two per cent supporters of BJP in the state would not have voted for the party in the 2014 Lok Sabha elections had Modi not been named the Prime Ministerial candidate as per a CSDS post-poll survey. This is one and half times of his all India average leadership ratings.

3. BJP’s good form in the nine out of ten states where it managed to form governments in the last one year

Notwithstanding the bypoll losses, the electoral momentum is with the BJP. In the last one year, elections have been held in ten states, and the BJP with its allies has managed to form a government in all of them barring Punjab. In seven of the states, it defeated the incumbent government in power. Even in minority-dominated states of the north east, BJP has defeated the 25-year-old Left government in Tripura. That being the case, people of Karnataka would surely not like to be the odd one out.

CRISIL has ranked 16 big states of India on three parameters of growth, inflation and fiscal position from fiscal 2013 and 2017. While Siddaramaiah boasts of performing better than the BJP ruled governments, CRISIL research shows the state ranked at six with Gujarat, Maharashtra, Madhya Pradesh, Chandigarh and Haryana, all BJP ruled states, ahead of it.

Price rise is one of the biggest election issues across the country. Inflation in Karnataka in the last five years has been the highest among the big states at 7.7 per cent versus the all India figure of 6.8 per cent. The BJP ruled states mentioned above, barring Chandigarh, have all been successful in reining prices below the national average level.

The state ranks third in terms of the number of farmer suicides in the country. The number of farmers who committed suicide in the state from April 2013 to November 2017 is 3,515; this is three times the number of suicides under the previous BJP reign (April 2008 to April 2012). The situation has worsened due to the severe drought situation in the state, with three consecutive droughts of 2014, 2015 and 2016. Fifty per cent of the state workforce is engaged in agriculture. The Congress government has announced a loan waiver for 22 lakh small and marginal farmers and announced sops in the budget, but that’s not enough. The simmering discontent among farmers for not handling the drought situation in a comprehensive manner and the failure to compensate them adequately could work against Siddaramaiah big time.

6. Deteriorating law and order in the state, mainly Bengaluru

The rate of crime (IPC) in Karnataka has increased from 224.7 per lakh of population in 2013 to 237.2 in 2016. Karnataka’s share in the total crime in the country has remained at 5 per cent. However, increase in crime in Bengaluru is a big concern. The city has overtaken Mumbai and ranked second among metropolitan cities in 2016. Crime in the city increased by 28 per cent in 2016 in comparison to 2015. The day light murder of Gauri Lankesh and the recent attack on the Lokayukta chief are recent examples of the precarious situation.

The Congress has changed its strategy, from localisation in Gujarat to Presidential style campaigning in Karnataka. Rahul Gandhi began his campaign in Bellary attacking Modi and the BJP at the national level. Siddaramaiah is also increasingly attacking BJP's central policies. This strategy not only entails the risk of pitting Rahul versus Modi, which will only help the BJP but also shows that there is not much, in terms of work and development, that he can claim credit for.

8. Return of Yeddyurappa and the LIBRA factor

Having formed the Karnataka Janata Paksha (KJP) and contesting independently in 2013, Yeddyurappa is back to the BJP. His party recorded 9.8 per cent vote share and was largely responsible for BJP’s drubbing in the last elections, down from 110 to 40 seats. Lingayats, accounting for 17 per cent of the state population along with Brahmins (3 per cent), are the anchor voting segments of the BJP. They are one of the most dominant and politically relevant communities in Karnataka having influence in North Karnataka, Hyderabad Karnataka and the Bombay-Karnataka region. Karnataka has had seven Lingayat chief ministers, the highest from any community. With Yeddyurappa as the CM candidate, the block is expected to solidly back the BJP. In the 2014 Lok Sabha elections, over 60 per cent voted for the BJP, giving it a head start with 12 to 15 per cent vote share.

9. Consolidation of Hindu votes against appeasement politics of Siddaramaiah

Muslims account for 13 per cent of the state population with a hold on around 60 seats, and Siddaramaiah has been trying his best to consolidate votes with announcements like the withdrawal of communal violence cases; there is also the fear that some Muslim votes will slip away to the JDS. He has been showing the Dalits and backward classes the lollypop of 70 per cent reservation. All this, he hopes, will help him retain the state. But he needs to realise that this style of politics no longer works in the new era of the 'unified Hindu vote' that has emerged since the 2014 Lok Sabha poll, as one could see in the UP and other state elections. This excessive wooing may only lead to a polarisation of the Hindu votes in favour of the BJP.

10. BJP has emerged as the second preference party of Vokkaligas

Vokkaligas (12-15 per cent of the population) are the dominant peasant caste of Old Mysuru and have traditionally backed Deve Gowda’s JDS. Excessive wooing of minorities and backward politics played by the Congress government will ensure that they would not side with the Congress. The caste census, which allegedly portrays their ratios falling below the 12 per cent mark, has angered the community against Siddaramaiah. In seats where the JDS is weak and not in a position to win (130 odd seats), the community is expected to back the BJP. This means an additional 3 to 5 per cent vote share for the BJP from the Vokkaligas.

To conclude, BJP is inching ahead in Karnataka, strongly backed by LIBRA, the popularity of Modi and the anti-incumbency against the Siddaramaiah government. After 2014 Lok Sabha elections, 20 states have gone to polls, wherein 14 incumbent governments have lost elections (70 per cent). Currently, the BJP leads the race with 38 per cent vote share, ahead of the Congress by 3 per cent, as per my calculations, just enough to get a simple majority.