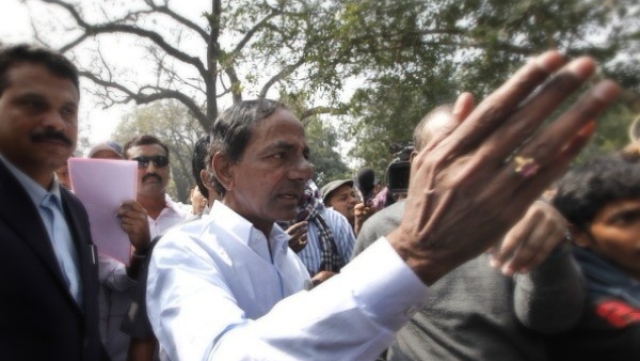 Telangana Chief Minister K Chandrasekhar Rao’s decision to direct his attention to national politics for the creation of a “third front”, by bringing together parties with the exclusion of Bharatiya Janata Party (BJP) and Indian National Congress, has created a political storm in state politics. Thus far, the Telangana Rashtra Samithi (TRS) president had never shown any interest in national politics. Even during his brief stint in the Union government after the 2004 polls, as an ally of the Congress-led United Progressive Alliance (UPA), he had hardly focused on his ministry.

Since becoming chief minister of the newly formed Telangana state in 2014, he has said repeatedly that he is aiming to create “Bangaru Telangana” (Golden Telangana), towards which he would direct his focus for the rest of his life. Now, he is making the claim that both the Congress- and BJP-led regimes have failed to give any direction to the country or resolve any basic issues during the last seven decades since India achieved independence.

In fact, he had offered to merge his party with the Congress in 2014 for realising his decade-old struggle for a separate state. After 2014, he has been constantly extending his support for all key initiatives of Prime Minister Narendra Modi, more than any BJP chief minister. After demonetisation, he was the first chief minister, for instance, to have studied the move in depth and gone to the Prime Minister with praise but also concrete suggestions for effective implementation.

Rao’s daughter, Kavitha, who is a Lok Sabha member, had also made some moves to join Modi’s cabinet. However, as both Modi and Rao had not shown much interest for an alliance between the BJP and TRS, she failed in her attempts. Keeping an eye on Muslim voters, who have a large presence in Hyderabad city, Rao has been maintaining a close political association with All India Majlis-e-Ittehad-ul Muslimeen (AIMIM) and keeping the BJP at a distance in the state.

In this context, Rao has been raising the question of concentration of more and more powers with the Centre. This issue was earlier raised by Telugu Desam Party founder N T Rama Rao (NTR) in the 1980s, when he said the Centre was a “myth”. Like NTR, Rao is now proposing that the Centre limit its functioning to areas like defence, external affairs, and currency, leaving subjects like agriculture, rural development, urban development, and women and child welfare to the states.

Congress Party and BJP, which have ruled the country most of the time in the past 70 years, have encouraged centralisation of power with the Centre. Because of this, all powers relating to any key subject are now with the Centre. This situation is creating hurdles for the country to develop on all fronts.

Though state BJP leaders frequently criticise Rao’s approach to governance, from time to time several Union ministers during their visit to Hyderabad have praised him for his work. Recently, NITI Aayog Vice Chairman Dr Rajiv Kumar spoke positively about Rao’s financial aid to farmers of Rs 8,000 per acre, without an upper cap, on land every year. He said this would be ideal for other states to follow.

Rao, who mostly operates from his camp office, and hardly seen in the secretariat or visiting districts, is known as a “master strategist”. He has a good sense of timing when it comes to counter his detractors. At a time when elections are nearing, his government has allegedly failed to meet the aspirations of the youth, farmers, and weaker sections. It seems then that the TRS chief has resorted to a master stroke to check the main opposition, the Congress, who will challenge his seat of power in the 2019 polls.

As the “third front” helps him to project himself as a prime ministerial candidate, that would catch the sentiments of the people in Telangana, which is what, in fact, helped him to win in the 2014 elections, as a champion who achieved statehood. On the other hand, this would provide Rao with an opportunity to shake hands with smaller parties like the AIMIM, Jana Sena, and even TDP. Already both TDP and TRS leaders have been hinting at intentions to form an alliance.

As expected, Rao has received an immediate response from Jana Sena chief Pawan Kalyan and AIMIM supremo Asaduddin Owaisi. Both of them have said they would support Rao in this new endeavour. AIMIM president and Hyderabad Member of Parliament Owaisi said, “There is a need to form an alternative political front against BJP and Congress Party. CM KCR can do it. AIMIM is with him in forming such front.”

Extending his support to the initiative, Owaisi said there was a need for a third front in the wake of the BJP-led National Democratic Alliance government’s failure to live up to people’s expectations and to bring back the stability eroded during the 10-year rule of the UPA.

However, the Congress dismissed Rao’s move, saying it was part of Prime Minister Modi’s plot to divide the non-BJP forces joining hands with the Congress. Telangana Pradesh Congress Committee president N Uttam Kumar Reddy said Rao was “speaking about a third front to cheat people yet another time. He is colluding with Prime Minister. People should remove both of them from power in the coming elections and choose Congress.”

The Chief Minister is said to be confident that the new front will hold sway in six to seven states in the 2019 general election. TRS leaders claims that while West Bengal Chief Minister Mamata Banerjee, former Chhattisgarh chief minister Ajit Jogi, former Jharkhand chief minister Hemanth Soren and other old friends of Rao have already pledged their support, the left parties are also in touch with him in this regard.

“We are also expecting support from former Uttar Pradesh chief minister Akhilesh Yadav, who suffered defeat due to alliance with Congress. By endorsing special category status for Andhra Pradesh and BJP not yielding to it, Chandrashekhar Rao has put Andhra Pradesh Chief Minister N Chandrababu Naidu in a spot,” a senior party leader observed.

Further, the party leaders are confident that Odisha Chief Minister Naveen Patnaik will support Rao as Biju Janata Dal was facing a threat from the BJP in Odisha and the party was unwilling to ally with the Congress.

Meanwhile, Rao is expected to begin his nation-wide tour after the budget session of the state assembly. The tour is aimed at bringing together like-minded forces who have already extended their support to the cause. Sources say agriculture and farmers’ welfare are high on his agenda, besides harnessing the abundant river water resources available in the country, when he meets with both political entities and experts from various fields. Rao had already reportedly put together a team of strategists to work out state-wise issues that need to be addressed. A draft agenda will be ready before he launches his national tour.