Mahathir Mohamad And The Diminishing Dream Of A ‘New Malaysia’ 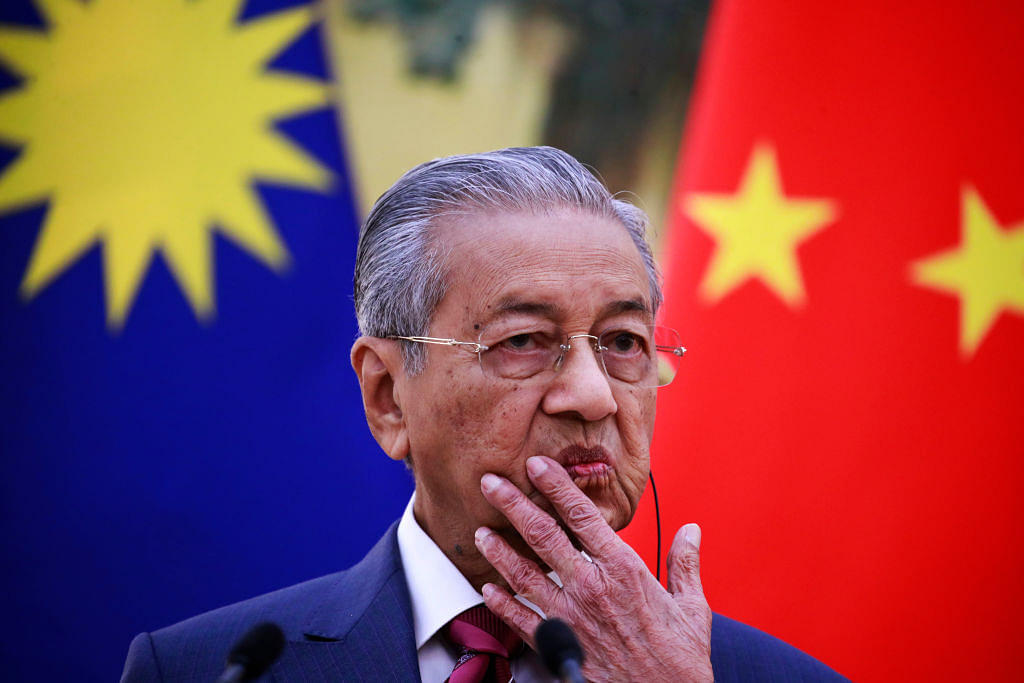 Malaysian Prime Minister Mahathir Mohamad gestures as he speaks during a press conference at the Great Hall of the People in Beijing.  (How Hwee Young - Pool/Getty Images)

Minority communities have long desired socio-economic equality and greater cultural freedom in the Muslim-majority Malaysia. The dominant Malay-Muslim community, which comprises 67 per cent of the population, has enjoyed greater socioeconomic privileges including greater access to business and education opportunities as well as seats in public administrative services, as enshrined in Article 153 of the Malaysian Constitution.

The minority community, primarily comprising of 24 per cent Chinese and just 7 per cent Indians have long been denied these rights, despite being accorded citizenship status. The elections in May 2018 offered them new hope. The victory of Prime Minister Mahathir Mohamad of the Pakatan Harapan (PH) coalition was eagerly welcomed by the Hindus, Chinese and other minorities. Mahathir Mohamed committed to bridge the country’s racial and ethno-religious divide and promised to build a "New Malaysia".

In particular, the PH’s election manifesto promised ratification of the International Convention on the Elimination of All Forms of Racial Discrimination (ICERD), which is a UN convention that promotes understanding amongst races and penalises racial crimes and institutional affiliations. The ratification could have paved the way for greater political representation of the minorities and improved access to educational opportunities.

However, recent events in Malaysia, including the Mahathir Mohamed government’s decision to put the ratification of the ICERD on the back burner, make this clear.

In late November, the government was forced to defer its plans to ratify the ICERD, after it became a campaign issue for the opposition. In particular, the largest opposition party, United Malays National Organisation (UMNO), the Islamist party Parti Islam Se-Malaysia (PAS), and some ethno-religious groups were up in arms against the UN convention. They argued that the ratification of the ICERD will dilute the constitutional provisions that discriminate in favour of the ethnic Malays, who are mostly Muslim.

Even after the government dropped its plans to ratify the ICERD, UMNO and PAS went ahead and organised a mass protest rally over the issue. The UMNO deputy president, Daruk Seri Mohamad Hasan, gave a call for Malays to come out on the streets to regain power and respect that he said has been "lost" under the current regime. More than an opposition to the incumbent government’s policies, the demonstrations were actually a sign of the growing resentment against the multiracial and multi-religious character of the country.

The recent developments have parallels to 1971 when the numerically dominant Malay-Muslims or the Bumiputera community demanded socio-economic privileges leading to the implementation of New Economic Policy (NEP) and the policy of Ketuanan Melayu or Malay Supremacy. The Bumiputeras as well as the Islamist political parties have time and again asserted their civilisational and sovereign legitimacy on their motherland on the pretext of Ketuanan Melayu to shape the country’s discourse.

This eventually paved the way for demanding greater sociocultural and political freedom as well. This time the fight is to preserve these systemic benefits and greater affirmative action, which are enjoyed by the Malay-Muslims and have proved to be detrimental to the rights of minority Hindu and Chinese communities. This was also a call by the opposition parties to safeguard “Islamic values” that would be “threatened” in case the ICERD is implemented.

Furthermore, another sign of a brewing ethno-religious discord in the country was the breaking out of violence at the premises of a centuries-old Hindu temple, the Sri Maha Mariamman Devasthanam, in the Malaysian township of Seafield in late November. Originally a property dispute, the conflict soon escalated into a full-fledged riot with nearly 50 Malay-Muslim youth attacking the temple and its devotees. Several people were injured in the violence, which also led to damage of property.

While the government showed full support to the victims and condemned the violence on the temple premises as a criminal offence, no such statement of condemnation was released by the major opposition parties, UMNO and PAS. It is noteworthy that in 2016, when UMNO was in power, seven Hindu temples were desecrated within three months, all in blatant acts of religious intolerance. The latest riot in front of Sri Maha Mariamman Devasthanam is therefore an outburst of an anti-pluralist sentiment that clearly persists despite the change in government.

It is also ironic that the Malay-Muslims have chosen to call themselves and some other ethnic groups as Bumiputera, meaning "sons of the soil", a word that is actually derived from Sanskrit and is found in both Indic and Malaysian languages. This reflects the deep cultural links with the Indic civilisation, and it certainly clashes with the current socio-political churning in the country.

With time, the PH is likely to face increasing pressure from the majoritarian and Islamist forces to alter the ruling coalition’s commitment towards fulfilling its election promises concerned with the rights and well-being of minority communities.

The government will also have to defuse any potential ethno-religious tensions that may emerge in the near future. It becomes important that the PH government does not easily capitulate to the populist demands of the opposition parties and other groups, especially on religion-linked issues; only then will the interests of minorities be truly safeguarded.

In the aftermath of the recent events in Malaysia, Professor Awang Azman Awang Pawi of University Malaya remarked, “the (Hindu) temple riot, the anti-ICERD demonstration... prove that ethnic and religious issues are very sensitive in Malaysia”.

Indeed, the incidents only demonstrate the diminishing dream of a 'New Malaysia’, where each citizen enjoys equal privileges. On the contrary, they have brought to the fore a religiously and racially charged narrative and reinstated the policy of Ketuanan Melayu, as an obstinate element of the Malaysia’s political system.