Mamata Banerjee Is Playing The Hindu Card To Counter BJP 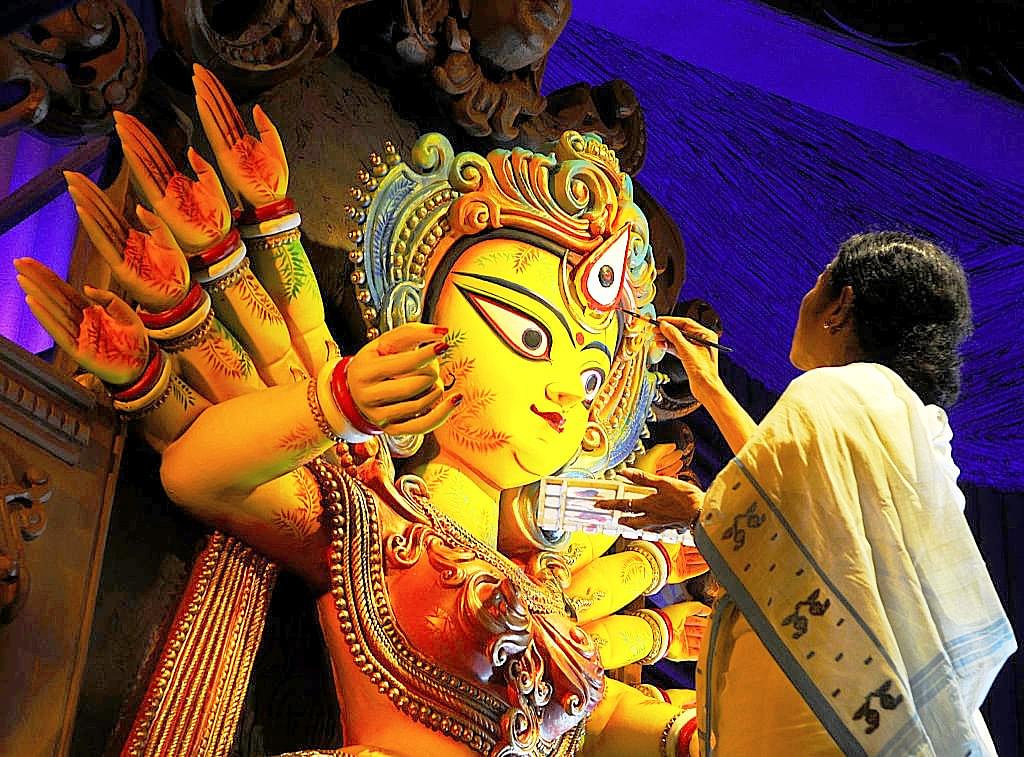 After having worn the hijab*, recited the kalma** and bent over backwards to appease Muslims, Bengal Chief Minister Mamata Banerjee has now turned her attention to appeasing Hindus. But that is not out of any new-found love for the majority community or an attempt at course correction, but triggered by the realisation that the Bharatiya Janata Party (BJP) is fast gaining ground in Bengal and her politics of minority appeasement has not gone down well with a substantial section of Hindus. Banerjee is extremely worried over the BJP’s gradual success in consolidating the Hindus.

The latest instance of Banerjee playing the Hindu card is her decision to observe Ram Navami next Sunday (25 March). This is significant because she had strongly opposed the celebration of Ram Navami by the BJP last year. But this year, she has instructed her party leaders and workers to take out rath yatras on Sunday to mark the birthday of Shree Ram. She herself, however, is not likely to participate in any Ram Navami procession lest it offends her minority vote bank.

Last year, when the BJP announced it would hold Ram Navami processions in Bengal, she strongly opposed it. Despite being discouraged and even warned by Trinamool Congress workers against participating in Ram Navami processions, hundreds came out on the streets chanting ‘Jai Shree Ram’, carrying swords, trishuls and bows and arrows. The Left-liberal cabal, egged on by Banerjee, had then tried to spin a false narrative that Shree Ram is not revered in Bengal and Bengali Hindus have no history of worshipping Bhagwan Ram. However, this attempt fell flat on its face and the overwhelming response to the BJP’s call to celebrate Ram Navami last year rattled Banerjee. Also, though she had asked her police force to stop people from carrying traditional weapons like bows and arrows, swords and maces in the processions, the cops could do little as hundreds came out with such weapons.

“It is not as if people of Bengal have always participated in Ram Navami celebrations in such large numbers as they did last year. And carrying of weapons in such processions is also not a traditional practice. But it was a show of popular defiance and anger against the minority appeasement politics of Mamata Banerjee. People were disgusted by her policies and so they defied her just to demonstrate their anger. People of Bengal also did not take kindly to her attempt (by suggesting that Bengali Hindus do not worship Bhagwan Ram) to distort Hinduism and trying to create a divide between Bengali and non-Bengali Hindus,” explained a senior BJP leader, who was at the forefront of processions in Rampurhat, which has become a BJP stronghold now.

“Over the past five years, restrictions were imposed by the Trinamool Congress government on celebrations of Saraswati Puja and Durga Puja in certain places while the minority community celebrated and observed all their festivals and religious occasions without hindrance. Temples were attacked and desecrated but the state government looked the other way. Hindu homes and establishments were attacked by Muslim mobs but no action was taken against the culprits. The police were even rendered powerless to thwart attacks by Muslim mobs on police stations and police property as well as policemen. Everyday we see, read (in the newspapers) and hear about blatant minority appeasement by Banerjee and her government. Banerjee shuts down schools run by Hindu organisations for including Hindu scriptures in the curriculum but encourages madrassas that preach radical Islam, hatred and jihad to flourish. Hindus, thus, are obviously hurt and angry,” said a senior Rashtriya Swayamsewak Sangh (RSS) functionary, who has worked in Bengal for the past few decades.

Banerjee realises all this and, hence, her desperate attempt to please Hindus. The RSS promptly dubbed her decision to celebrate Ram Navami as its moral victory while the state BJP welcomed, albeit with a fair amount of sarcasm, the decision. “We welcome the Trinamool chief’s decision to celebrate Ram Navami with millions of other Hindus. We consider this change of heart a victory for us since she had opposed our celebrations last year,” said state BJP chief Dilip Ghosh. But the BJP is not allowing Banerjee to woo away Hindus so easily. The stage is being set for a confrontation on Sunday: while Banerjee has ordered the state administration to ban carrying of weapons in Ram Navami processions, Ghosh says he, and countless others, will defy the ban.

“I will carry a mace myself. Weapons have been symbolically carried during Ram Navami processions since time immemorial. Bhagwan Ram defeated Ravana and, thus, he symbolises bravery, virtue and pride. That is why participants in Ram Navami processions carry weapons. It is a symbolic act and weapons are not carried to attack other communities. Mamata Banerjee has no right to interfere in religious practices of Hindus. The ban on carrying of weapons has no logic. We have heard that she (Mamata Banerjee) said it would act as a provocation to Muslims and make them feel insecure. That makes no senses. Hindus don’t get provoked or feel insecure when Muslims carry weapons in their Muharram processions,” said Ghosh.

Apart from organising Ram Navami processions this year, Banerjee has taken many overt and covert measures over the past one year to woo back Hindus. She has discarded the hijab and has rarely been seen in public wearing it. Since 2011 (when she came to power in the state), she had taken to wearing a white stole covering her head, as many Muslim women in conservative households in Bengal do. Her party leaders (with her express approval, of course) organised sammelans for Brahmins and handed over one-time doles (cash awards and some material gifts) to purohits. While that was done to counter the fierce criticism of the monthly doles the Banerjee government hands over to imams and muezzins, the move backfired because comparisons were instantly made between the doles: while the ones to the Muslim religious men were regular and substantial, that given to Hindu purohits was peanuts and, thus, insulting to Hindus.

Banerjee has also been making it a point to attend Hindu religious ceremonies in full public glare, something she used to avoid doing earlier. She recites mantras at such ceremonies, as if to assert her Hindu identity and has even proclaimed openly that she knows the scriptures by heart. It is another matter that she often mixes up mantras and evokes a lot of mirth in the process. Her government has been giving generous doles to local clubs and asking them to organise Durga Pujas and Saraswati Pujas on a larger scale. She has consciously avoided being seen very frequently in public with Muslim religious leaders.

But her overtures may be too little, too late. At least that is what the BJP claims. “Hindus are not fools and they realise that she is doing all this just to recapture lost political ground. If she had a genuine change of heart, she would not have imposed restrictions like carrying of weapons during Ram Navami celebrations. Everyone knows she needs her minority vote bank to win elections and when it comes to the crunch, she will get back to her aggressive minority appeasement to keep that vote bank intact. All that she is doing now is a stunt devoid of any sincerity,” said a state BJP secretary, who did not want to be named since he is not the official party spokesperson.

The BJP leader may be right. Banerjee has travelled too far down the minority appeasement road for Hindus to start feeling she will protect their interests too. The images of Banerjee wearing a hijab and reciting the kalma in public are far too strong to be fade away so easily.

* A headscarf worn by Muslim women

** A Muslim confession of faith which translates thus: “There is no God but God, Mohammed is the prophet of God”. Significantly, this is recited by fresh converts to Islam to assert their new faith.